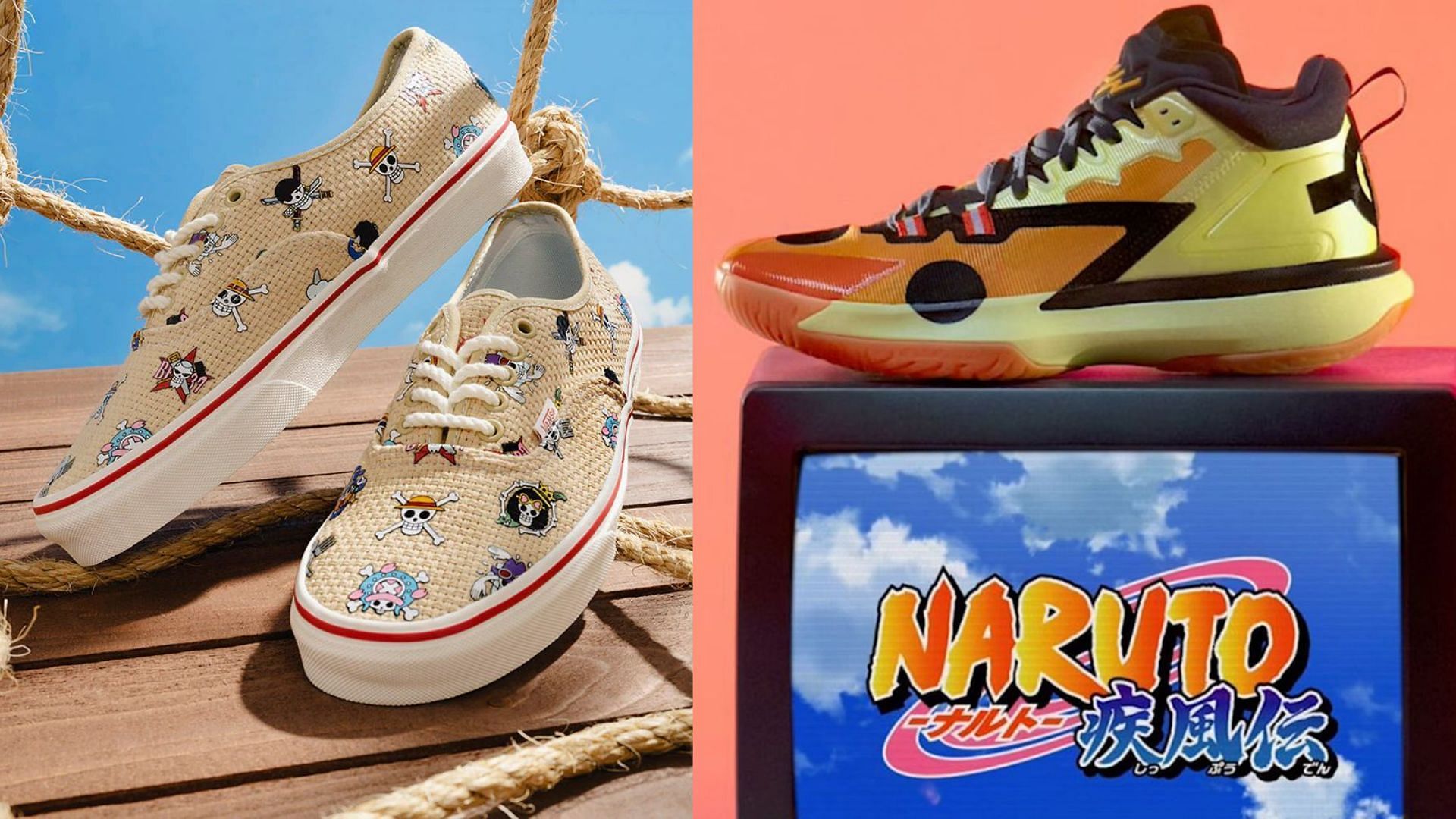 All well-known shoe brands including Converse, Jordan, and Vans have launched anime businesses this year. Thanks to the brand, fans can embrace their favorite anime characters. The top five anime sneaker collabs that have the shoe industry excited are listed below for otakus who want to know more about the trending anime collabs of 2022.

One of the best-known anime-sneaker partnerships of the year is undoubtedly the naruto x Jordan Zion 1. Along with being a global release of Nike’s coveted Jordan Zion line, it included a promotional colorway for an additional Jordan 200E and three entirely separate Zion 1 colorways for the main release. Additionally, the duo have launched an extensive apparel range with matching items in each colourway, making the selection widely available for naruto fans around the world.

Each of these styles features color schemes and design approaches specific to a particular character from the “Big 3” series. The “Kyuubi” adequately depicts Naruto’s “Nine Tails” and “Sage of Six Paths” modes, two of the main characters’ most significant transformations, using shades like electric yellow, alpha orange, and black. .

The color palette of “Sage of Six Paths” uses the similar white and black dots that appear in the character representation of the Sage of Six Paths, a divine ancestor of the Shinobi. Next, the “Nine Tails” depicts the “One/Four/Eight Tails” adaptation of Naruto with jagged lines as well as dynamic orange and black designs.

Finally, the “Jonin” combines the same colors found in the outfits of the very high-ranking Jonin Shinobi, who plays the military commanders in the series: olive green, navy blue and white.

Each pair was marked with a price tag of $130 and was offered through Nike’s SNKRS app and some of the brand’s select retail stores.

Although Pokemon and Converse already partners in January 2022, their May 2022 collaborative edition captured everyone’s attention due to its distinctively minimalist take on lively sneakers. For this partnership, four pairs of Converse All-Star Chuck Taylors have been designed to replace the now famous classic Pokemon – Pikachu, Eevee, Piplup and Mewtwo.

Each Chuck Taylor features a pixelated game character based on a primary color from the Pokemon design on the tongue. Another important feature is a small text box with the character’s name, height, weight and Pokédex code located under the heel.

Converse went against the grain of most brands, favoring minimalism over big statement pieces. Despite this, each pair of Chuck Taylors are easily distinguished by the Pokémon they represent, making this collection special despite its subtlety.

Several sizing options for these shoes have been offered by the Swoosh-owned sneaker brand. All four colorways were purchasable for around $76 (¥9,900).

Vans, the famous skateboarding label and ardent defender of artistic expression, has announced a partnership with the Japanese animated series A play. A range of footwear and apparel will be launched to celebrate the wonderful bond.

Fans can relive the stories of the Vans x A play collection, which chronicles the One Piece quest of Monkey D. Luffy and his crew. Vans’ iconic Sk8-Hi Punk Hazard, which features a graphic 360 degree wrap from the lateral side of the shoe, symbolizing the fiery side of the island, to the medial side, representing the frozen side, stands out from the rest of the shoe. collection. Each Straw Hat Crew shoe features Vans’ signature checkerboard patterns.

Another highlight of the line is the Vans Classic Old Skool with the iconic Devil Fruit, which gave many protagonists the story’s unique superhuman abilities but also made them unsuitable for swimming.

The Vans Classic Authentic from this collection, featuring a burlap upper and fully embroidered with distinctive designs A play badge to honor the straw hat, was influenced by traditional American nautical design.

With the famous Wanted posters of “Cat Burglar” Nami on the Sk8-Hi Skateboard in Orange and “Demon Child” Nico Robin in purple on the Old Skool Skateboard, the A play vibe is also present in the Vans Skate Classics collection. The A play the badge is wrapped around the outsole of both models.

On November 11, a line of shoes and apparel will be available online and in Vans stores. Stay tuned for pricing details for this collection.

In the field of manga and animation, Jujutsu Kaisen is on its way to becoming one of the “Next-gen Big 3”. Fans have drawn comparisons between it and contemporary masterpieces such as Hunter X Hunter due to similar captivating storylines, extensive superpower systems, endearing characters, and superior animation.

Jujutsu Kaisen continues to grow its presence in anime and modern culture. Moreover, in 2022, they have taken their first steps in the field of sneakers and high-end clothing. They did this by working with Italian-born luxury fashion company Dolce & Gabbana.

The Jujutsu College School emblem, which is embossed on the outer side of the upper and is a clear nod to the school that any fan would know, is the most striking feature alongside the bright, eye-catching colors.

Although not worn by any character, the white D&G NS1 sneakers were also made available as part of the collection. In addition to Jujutsu Kaisen hangtags, it has Jujutsu College color schemes and a more understated school emblem.

This spring, Vans and Pretty Sailor Moon Babysitter have joined forces for a unique partnership guided by anime’s cherished stories of friendship, justice, and love. The stories of Sailor Moon and the Sailor Guardians are represented on an action-packed line of shoes, apparel and accessories in legendary Vans styles.

The sneaker collection comes in a variety of styles across women’s, men’s and kids’ categories. The Sk8-Hi Stacked incorporates materials with satin patches and sleek leather overlays, which are accented with a bow and brooch from Sailor Moon’s transformations. The models have translucent heels and bumpers emblazoned with Sailor Guardian planetary patterns and colorful gradient sidewalls. As for famous characters from the series, The Sailor Guardians and Tuxedo Mask appeared on Authentic shoes.

Fans can choose from different styles for women, men and children in the range of clothing in the collection. This line of clothing and accessories offered t-shirts, sweatshirts, panel caps and backpacks. All of these have been loaded with the images from the series.

The Sailor Moon The x Vans collection was released on June 10. Items ranged from $17 to $180 for clothing and shoes.

These are some of the best anime collaborations we received in 2022. Fans interested in copying the above mentioned collectibles can surely visit the respective brand’s website. Also, check these items with their partner outlets in case they are not available on the brand’s official store.