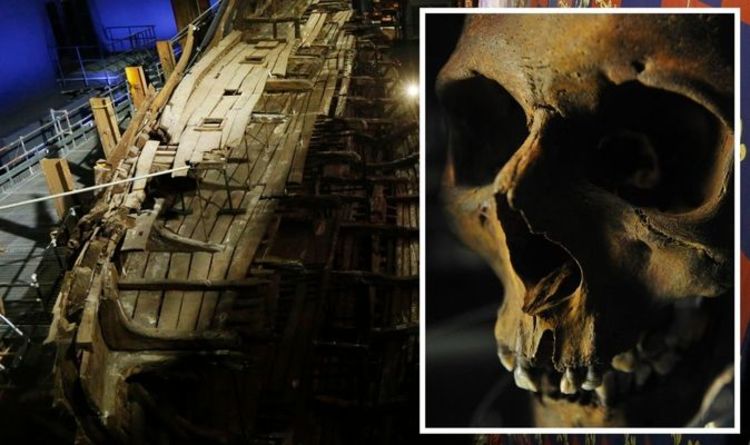 The Mary Rose was King Henry VIII’s favorite warship. It served in numerous wars against the French, Scotland and Brittany, before seeing its last action almost 500 years ago. She spent over 400 years on the bed of the Solent, before being raised on one of the most complex and costly marine rescue projects the world has ever seen. The ship was a Tudor treasure, with the surviving section of the ship and the 26,000 artifacts left behind acting as a Tudor-era time capsule.

However, it is unclear exactly how it sank, due to a range of different testimonies as well as a lack of conclusive evidence to support each.

The Channel 4 documentary ‘Skeletons of the Mary Rose: The New Evidence’, which premiered two years ago, helped redefine what we knew, or thought we knew, about Tudor England.

When the ship was relieved in 1982, the remains of at least 179 crew members were found, along with thousands of personal items.

Clothing, games, tools and coins were among the personal items found.

READ MORE: Mary Rose breakthrough: the ship was “six minutes before being saved”

Many human remains have been perfectly preserved, allowing scientists and archaeologists to better understand the backgrounds of the crew members.

A man whose story they desperately sought to solve was called “Henry”.

Dr Alex Hildred, head of research at the Mary Rose Trust, told Channel 4, after Henry’s skull was sent for digital analysis, the results came as a shock.

She said: â€œEveryone said this skull was completely different from the rest.

â€œThings like the distance between the eyes, the length of the nose in relation to its width, the tilt of the lower jaw.

Over 26,000 artifacts were recovered from the ship. (Image: GETTY)

â€œThey think, perhaps, that he was of African origin. And for us, it’s extremely exciting to think that we could have an African.

Researchers from the Mary Rose Trust and Cardiff University got to work, using a technique called multi-isotope analysis on the teeth of eight crew members, to investigate their origin.

Researchers originally believed that the team of carpenters on board would all have been English, until they found curious pieces nearby.

Dr Hildred said: “We had a bunch of pieces that were grouped together and they came apart, revealing the face of one of them, which was a Spanish piece.”

Next to the Spanish coin was a carpentry tool called an adze, which is also Spanish.

DO NOT MISS :
Russia threatens millions as it rages in Irish waters [INSIGHT]
Archaeologists amazed by the discovery of an “800-year-old” pre-Inca mummy [DISCOVERY]
Breakthrough in ancient Egypt as those responsible for ‘desecrated’ tombs are identified [INSIGHT]

A portrait of ‘Henry’, one of the crew aboard the Mary Rose. (Image: GETTY / Mary Rose Trust)

Dr Richard Madgwick, archaeologist at Cardiff University, analyzed one of the crew, named “the carpenter”.

Oxygen isotope analysis can help determine where the research topic is coming from. The higher the value, the warmer the climate.

Dr Madgwick said of the ‘carpenter’: ‘This is one of the highest values. So this certainly indicates that he is probably of Mediterranean descent.

â€œSo Spain would be consistent with that. The Iberian Peninsula is definitely a possibility.

The coins on the ship provided a glimpse of a multicultural crew. (Image: GETTY)

Another member of the crew was named “Royal Archer” because he wore a leather wrist guard bearing the symbol of a pomegranate, which was associated with Catherine of Aragon, the first wife of Henry VIII.

He was expected to be English, but the oxygen values â€‹â€‹were “among the highest obtained from any person in Britain”.

Dr Madgwick speculated that it could come from the North African coast.

As for Henry, he had the lowest oxygen value of all.

Dr Madgwick said: ‘The values â€‹â€‹suggest a solidly British origin, but that doesn’t mean he is not of African descent.

“This suggests he’s a second generation or later.”

DNA tests on Henry later confirmed he was of African descent. A DNA profile has suggested that it may have come from the Berbers of Algeria, in the northern Sahara.

The crew’s analysis indicated that previous thoughts on Tudor England were very wrong.

Dr Madgwick added: “Landing in three from just eight individuals suggests that the crew was much more multicultural than we perhaps previously thought.”

Dr Hildred echoed this: â€œNow we’re going to be able to say that Henry’s ship had a crew that mirrored Tudor Britain at the time. We couldn’t hope any longer, really.

She finished: â€œThe idea that a Tudor warship had an all-English crew is now definitely swept out of the water. “