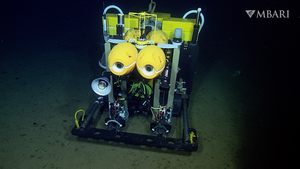 The extent of the deep seabed and the technological challenges associated with working in an extreme environment make these depths difficult to access and study. Scientists know more about the moon’s surface than they do about the deep seabed. MBARI is leveraging advances in robotic technologies to address this disparity.

An autonomous robotic rover, Benthic Rover II, has provided new insight into life on the abyssal seabed, 4,000 meters (13,100 feet) below the ocean’s surface. A study published today in Scientific robotics details the development and proven long-term operation of this rover. This innovative mobile laboratory has also revealed the role of deep sea in the carbon cycle. The data collected by this rover is fundamental to understanding the impacts of climate change on the ocean.

â€œThe success of this abyssal rover now allows long-term monitoring of the coupling between the water column and the seabed. Understanding these connected processes is essential for predicting the health and productivity of our sunken planet in a changing climate, â€said Ken Smith, Senior Scientist at MBARI.

Despite its distance from sunlit shallows, the deep seabed is connected to the waters above and is vital for carbon cycling and sequestration. Pieces of organic matter, including dead plants and animals, mucus and excreted waste, slowly sink into the water column to the seabed. The community of animals and microbes on and in the mud digests some of this carbon, while the rest can be trapped in deep-sea sediments for thousands of years.

The deep sea plays an important role in the Earth’s carbon cycle and climate, but we still know little about the processes that take place thousands of meters below the surface. Technical obstacles such as extreme pressure and the corrosive nature of seawater make it difficult to send equipment to the abyssal seabed to study and monitor the ebb and flow of carbon.

In the past, Smith and other scientists have relied on stationary instruments to study carbon consumption by deep sea communities. They could only deploy these instruments for a few days at a time. Building on 25 years of engineering innovation, MBARI has developed a long-term solution for monitoring the deep seabed.

â€œExciting events on the high seas usually occur both briefly and at unpredictable intervals, which is why continuous monitoring with Benthic Rover II is so crucial,â€ said Alana Sherman, head of the electrical engineering group. “If you don’t watch all the time, you might miss the main action.”

Benthic Rover II is the result of the hard work of a collaborative team of engineers and MBARI scientists, led by Smith and Sherman.

MBARI engineers designed the Benthic Rover II to handle the cold, corrosive and high pressure conditions of the deep sea. Constructed from corrosion-resistant titanium, plastic and pressure-resistant syntactic foam, this rover can withstand deployments up to 6000 meters (approximately 19,700 feet) deep.

â€œIn addition to the physical challenges of operating under these extreme conditions, we also had to design a computer control system and software reliable enough to run for a year without a crash. McGill. â€œElectronics also have to consume very little power so that we can carry enough batteries to last a year. Despite everything it does, the rover only consumes an average of two watts, about as much as an iPhone.

Researchers deploy the Benthic Rover II from MBARI’s ship, the R / V Western Flyer. The ship’s crew gently lower the rover into the water and release it in free fall to the ocean floor. It takes about two hours for the rover to reach the bottom. Once it has landed on the seabed, the rover can begin its mission.

First, sensors check the currents flowing along the seabed. When they detect favorable currents, the rover rises or crosses the current to reach an undisturbed site and begin collecting data.

Cameras on the front of the rover photograph the seabed and measure fluorescence. This distinctive chlorophyll glow under blue light reveals how much â€œfreshâ€ phytoplankton and other plant debris has landed on the seabed. Sensors record the temperature and oxygen concentration of the water just above the bottom.

Then, the rover lowers a pair of transparent respirometer chambers that measure the oxygen uptake of the living community in the mud for 48 hours. When animals and microbes digest organic matter, they use oxygen and release carbon dioxide in a specific ratio. Knowing how much oxygen these animals and microbes use is crucial to understanding carbon remineralization – the breakdown of organic matter into simpler components, including carbon dioxide.

After 48 hours, the rover lifts the chambers of the respirometer and moves 10 meters (32 feet) forward, being careful not to cross its previous path, and selects another site to sample. It repeats this sampling pattern over and over again for the duration of the deployment, typically a full year.

At the end of each deployment, the R / V Western Flyer returns to retrieve the rover, download its data, swap out its battery and send it back to the deep sea for another year. During each year-long deployment, the MBARI team launches another autonomous robot, the Wave Glider, from shore to return quarterly to check on the progress of Benthic Rover II. â€œThe rover cannot communicate with us directly to tell us its location or condition, so we send a robot to find our robot,â€ McGill explained. An acoustic transmitter on the Wave Glider sends a signal to the rover on the seabed below. The rover then sends status updates and sample data to the glider head. The glider then transmits this information to researchers on land via satellite.

â€œThe data from the Benthic Rover II helped us quantify when, how much and what sources of carbon could be sequestered or stored in the abyssal seabed,â€ said Crissy Huffard, Senior Research Specialist at MBARI.

Over the past seven years, Benthic Rover II has been continuously operational at Station M, an MBARI research site located 225 kilometers (140 miles) off the coast of central California. Station M is located 4,000 meters (13,100 feet) below the ocean surface, at the mean depth of the ocean, making it a good model system for studying abyssal ecosystems.

Over the past 32 years, Smith and his team have built a unique underwater observatory at Station M. Benthic Rover II and a series of other instruments operate there 24/7 for a full year. maintenance free.

â€œThe rover’s reliable performance over seven years, spending 99% of its life on the seabed, is the result of many years of testing, troubleshooting and developing the best techniques to maintain the vehicle,â€ said Sherman. â€œThis is a great example of what is possible when applying technology to complex scientific problems. “

Data collected at Station M shows that the deep sea is far from static. Physical, chemical and biological conditions can change dramatically over time scales ranging from hours to decades.

The surface waters of the California Current above Station M are teeming with phytoplankton in the spring and summer. These seasonal productivity impulses cascade from the water column to the seabed. Much of this sinking organic material – known as â€œsea snowâ€ – came from carbon dioxide in the atmosphere.

Over the past decade, MBARI researchers have observed a dramatic increase in large pulses of sea snow falling on the seabed at Station M. These episodic events represent an increasing fraction of the annual food supply at this site. In seven years of operation at Station M, Benthic Rover II has recorded significant weekly, seasonal, annual and episodic events, all providing data that helps MBARI researchers understand the carbon cycle in the high seas.

Between November 2015 and November 2020, Benthic Rover II recorded a substantial increase in rains of dead phytoplankton and other plant-rich debris (phytodetritus) landing on the abyssal seabed from the waters above. A decrease in the concentration of dissolved oxygen in the waters just above the seabed accompanied this manna of organic matter.

Traditional short-term monitoring tools would not have detected fluctuations that lead to long-term changes and trends. Benthic Rover II has revealed a more complete picture of how carbon moves from the surface to the seabed.

â€œThe Benthic Rover II alerted us to important short and long term changes in the deep sea that are not factored into global models,â€ Huffard said.

The success of the Benthic Rover II and ongoing work by MBARI at Station M highlight how persistent platforms and long-term observations can deepen our understanding of Earth’s largest living space. With more and more companies seeking to extract mineral resources from the deep seabed, this data also provides valuable information on basic conditions in areas considered for industrial development or deep-sea mining.

The ocean is also a crucial part of the Earth’s carbon cycle and climate. The ocean and its biological communities are a sink for carbon dioxide. Burning fossil fuels, raising livestock and clearing forests release billions of tons of carbon dioxide into our atmosphere every year. The ocean has protected us from the worst impacts by absorbing more than 25 percent of this excess carbon dioxide. In the face of a changing climate, understanding how carbon flows between the ocean’s sunny surface and its dark depths is more important than ever.

MBARI (Monterey Bay Aquarium Research Institute) is a private, non-profit oceanographic research center, founded by David Packard in 1987, focused on the development of innovative technologies for the exploration and understanding of the ocean. MBARI’s mission is to advance marine science and technology to understand an evolving ocean.

For more information or images related to this release, please email [email protected]

The title of the article

Publication date of the article