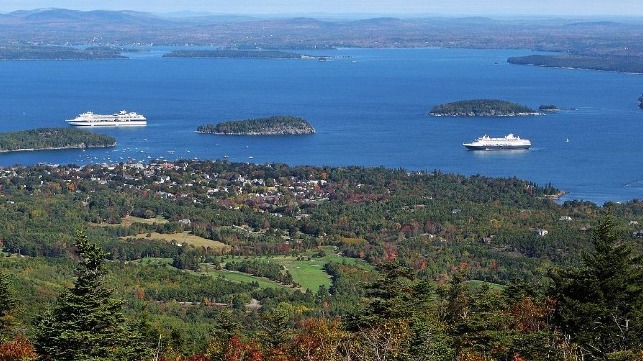 Bar Harbor, Maine, is fast becoming the latest popular tourist destination to impose new restrictions on cruise ship visits. The move comes after residents of the city expressed concerns about the overcrowding and congestion created by cruise ships during the 2019 season.

The issue of the impact of cruise ships on the small town is a constant concern as the number of port calls, the size of cruise ships and the number of passengers arriving each year continue to grow. The local Bangor Daily News reports that there were around 170 cruise ship visits in 2019, bringing 270,000 passengers (not including crew numbers) to the small town of just 5,600 in 2020. Estimates for The 2020 cruise season was for more than 200 cruise ship stopovers with perhaps 300,000 passengers before the pandemic resulted in the cruise industry being suspended and Bar Harbor shutting down its port.

At a meeting Tuesday night July 20, Bar Harbor City Council considered the results of a resident survey that explored quality of life issues and the impact of cruise ships. The city council decided last fall to hire an independent research firm to survey the city’s residents.

The survey results report highlighted perceptions of the 2019 cruise season. Almost two-thirds of those surveyed said there were too many days with cruise ships in port in 2019. two-thirds of residents also said the average number of cruise ship passengers was “too large” in 2019.

“I think that gives us our marching orders,” the Bangor newspaper reports, according to Councilor Matthew Hochman speaking at the meeting after reviewing the poll results. More than half of residents who responded to the survey said cruise ships negatively impact the quality of life in the area.

The research company said in its report that it was aiming for 400-500 responses to have a statistically accurate sample. However, a quarter of the city’s residents responded, showing strong feelings towards cruise ships. A total of 1,378 surveys made up the final data set.

The city council has decided to hold a workshop in August to develop final recommendations on the limits on cruise ships and plans to put them in the November 2021 ballot. The limits will be in effect for the 2022 cruise season and into the future. Meanwhile, city council has said any cruise ship booking tours in 2022 should be notified that it is tentatively subject to the new limits.