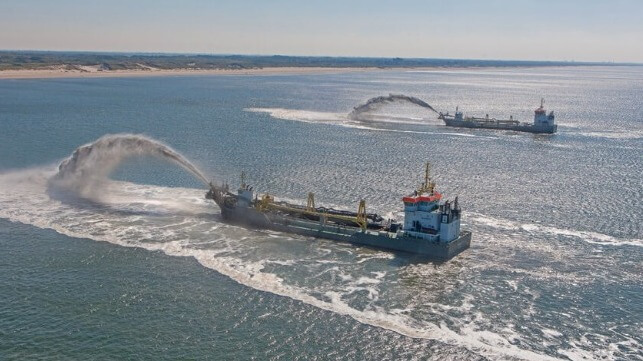 The main shareholder of the dredging and maritime services company Boskalis has announced that it is considering making a cash offer to privatize the company. The unsolicited $2.5 billion offer from HAL Holding came as Boskalis announced strong financial results for 2021 and presented a positive outlook for the company.

Founded over 100 years ago, Boskalis was traditionally a dredging company involved in hydraulic engineering, coastal protection and land reclamation. The company has expanded into a wide range of maritime services with a fleet of over 700 vessels and floating equipment. In addition to its historical services, which today include the construction and maintenance of ports and waterways, land reclamation, coastal defense and shoreline protection, the company offers services in the offshore energy. These include the development, construction, transport, installation, inspection, repair, maintenance and decommissioning of oil and LNG import/export facilities, -offshore forms, pipelines and cables, and offshore wind farms. Boskalis is also the parent company of emergency services, towing and salvage company SMIT.

“According to HAL’s assessment, the current public listing offers limited added value to Boskalis and does not outweigh the costs and other disadvantages of listing,” the investment firm writes, noting that it has been an investor since 1989 and currently owns just over 46% of the stock. “HAL believes that given the business characteristics of Boskalis, the long-term nature of its major projects (typically spanning several years) and the cyclicality of its underlying markets, Boskalis could benefit from private ownership with a long-term investment horizon, and that such private ownership could also enhance M&A opportunities.

Pending approval of the offer memorandum by the Dutch Financial Markets Authority, HAL has announced that it will launch an offer at a premium of 28% over the recent Boskalis share price. The offer, which is not subject to a minimum acceptance level, values ​​Boskalis at 4.2 billion euros (about $4.6 billion).

HAL is an investment company that emerged as the successor to Holland America Line after the passenger line was sold to Carnival Corporation in 1989. In making the offer, HAL stressed that it supported the existing strategy company and had no intention of changing direction. or strategy. However, he believes the long-term value would be better served as a private company.

The offer came as Boskalis announced strong financial results for 2021. “Boskalis is in good shape as a business,” they told shareholders, saying, “with its well-filled order book and its solid financial situation. The market looks favorable in the medium and short term, although the consequences of recent geopolitical events in Eastern Europe are still difficult to assess. They indicated that macroeconomic trends, including population growth and urbanization, which stimulate business would have a positive impact in the medium and long term.

They reported a 17.5% increase in revenue to just under $3 with a 55% increase in net profit. To support what it sees as an undervalued stock price, management announced a €100 share buyback program. The Board of Directors has acknowledged receipt of HAL’s offer, indicating that it will carefully consider all aspects of the proposed offer in accordance with its fiduciary obligations.