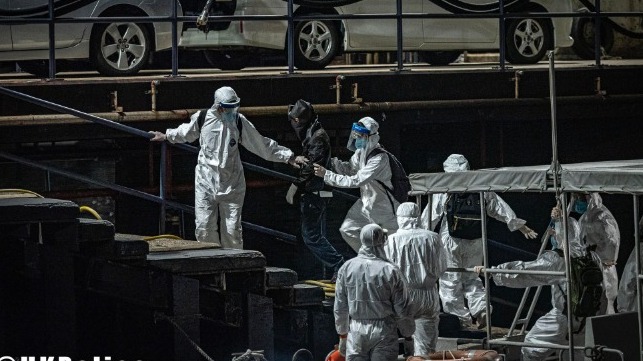 Hong Kong police have arrested the captain of a Singapore-flagged bulk carrier accusing him of providing false information to health officials when the ship arrived in Hong Kong from Indonesia last month. The accusations are part of Hong Kong’s efforts to tackle a spike in COVID-19 cases, which are blamed on â€œimported casesâ€ brought into China by people arriving from outside the country.

At the end of August, the Hong Kong Health Protection Center reported a total of 68 cases of COVID-19 in the previous two weeks. All but one of the cases were imported from abroad. Health officials said the number of cases was the highest since April 2021 and feared additional cases from overseas and especially workers arriving from the Philippines and Indonesia.

Fifteen of the cases reported at the end of August were linked to a single dry bulk carrier, flying the Singapore flag Monadic thor. The Department of Health reported that 15 of the 23 crew members aboard the bulk carrier tested positive for the virus, including the captain. They were transferred to a shore-based hospital while the other eight crew members were ordered to quarantine aboard the ship. After all 15 were recovered, they were transferred to the ship and ordered to remain on board without coming into contact with residents.

The health ministry said it was investigating the Monadic thor owned by Thorsen Shipping of Singapore and a second vessel, an LNG carrier, Asia Energy, which had sailed to Hong Kong at the beginning of August. Registered in the Bahamas, the 82,400 dwt vessel was also suspected of not having reported positive cases of COVID-19 when it stopped in Hong Kong but left a few days later. The Department of Health has warned that knowingly giving false or misleading information to its agents is punishable by a fine of HK $ 10,000 (approximately US $ 1,300) and up to six. months in prison.

Hong Kong police boarded the Thor mondic on September 6 to investigate the circumstances surrounding the COVID-19 cases. They searched the ship for evidence and the information was presented to court last week. Media reports indicate that the ship’s logs indicate that when the ship entered Hong Kong waters, several crew members had fever, cough and reported difficulty breathing. The captain, however, reported to health authorities that the vessel was disease-free and requested a pass.

The 53-year-old captain of the Monadic thor, a Thai citizen named Ekarat Timwatthana, was brought before a provincial chief justice and charged with fraud. They say he knowingly and willfully provided false information to the Department of Health to approve the vessel’s entry into Hong Kong waters around August 23.

The captain faces up to 14 years in prison for the increased fraud charges. He was released on HK $ 10,000 bail but forced to hand over his travel documents. He has to stay in Hong Kong and report to the police three times a week. His case is due to be heard on November 11.

Hong Kong media make the additional accusation that the ship was sent to Hong Kong due to lack of medical care available in Indonesia. Reports claim that instead of returning to Indonesia, the ship traveled to Hong Kong because the crew infected with the virus would be receiving medical treatment there.