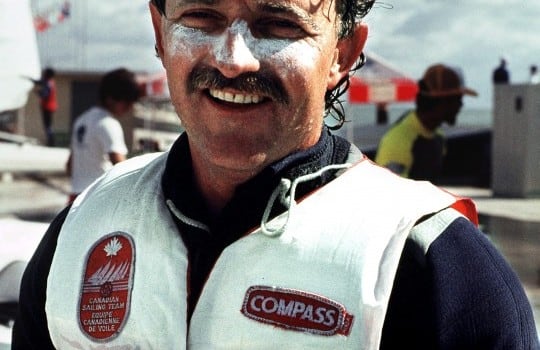 Before Larry Lemieux became an accomplished sailor, he enjoyed playing table tennis in the family basement in Edmonton and trying to earn the bragging rights of his seven older siblings or anyone else.

Lemieux’s father, who often worked long hours, made a rare appearance at the table when his youngest child was 10 or 11 years old.

Larry Lemieux: He was a semi-professional hockey player when he was young and played a lot of racket sports – tennis, badminton, table tennis. I had never seen him play ping-pong. He said, “I’m going to spot you 20 points and win without scoring a point.” All he did was come back [my shots] until I make a mistake. He did and won.

It was a big lesson for me. Wait until the other one gets it wrong, and the sport of sailing is a lot like that. You learn from your parents, siblings. Throughout our lives we’ve heard that it’s not whether you win or lose, it’s how you play.

Lemieux played the men’s Olympic sailing event the right way on September 24, 1988, in Pusan, South Korea, where he was on the water for the fifth competition of the seven-race series.

Gary Jobson, sailing commentator for NBC Sports: The weather in Pusan [now officially known as Busan] was intended to be a bit light for this series. But a series of stockings [pressure systems] came blowing through Pusan â€‹â€‹and that’s what made it so unusually windy and choppy, and I think it took everyone by surprise.

The best: The boat on which I was piloting, the Finn, is an animal a little different from the others. By design, it is able to cope with difficult conditions. As a Finnish sailor, I see it more as an opportunity to beat the weak, the guys who were afraid or who hesitated [in the poor weather]. I know I got the better of them because I love it.

The first part of a sailboat race is facing the wind. We sail upwind and [in 1988] it was about a mile and a half from the first mark and then it’s like a triangle. You come back with the wind a little oblique, and there were three races on our course – the Finn, 470 [class dinghy] for men and 470 for women.

The wind was very strong [at 35 knots]. We ran over to these big orange inflatable markers that are eight feet tall and four feet wide. The waves were so big that you couldn’t see the markers, sometimes, if they were in the trough of a wave. The waves were steep from the current going against the wind and that doesn’t always happen. It was like smashing an accordion, definitely unique and fundamentally out of control.

Jobson: He was leading the raceâ€¦ and I’m pretty sure he won the bronze medal.