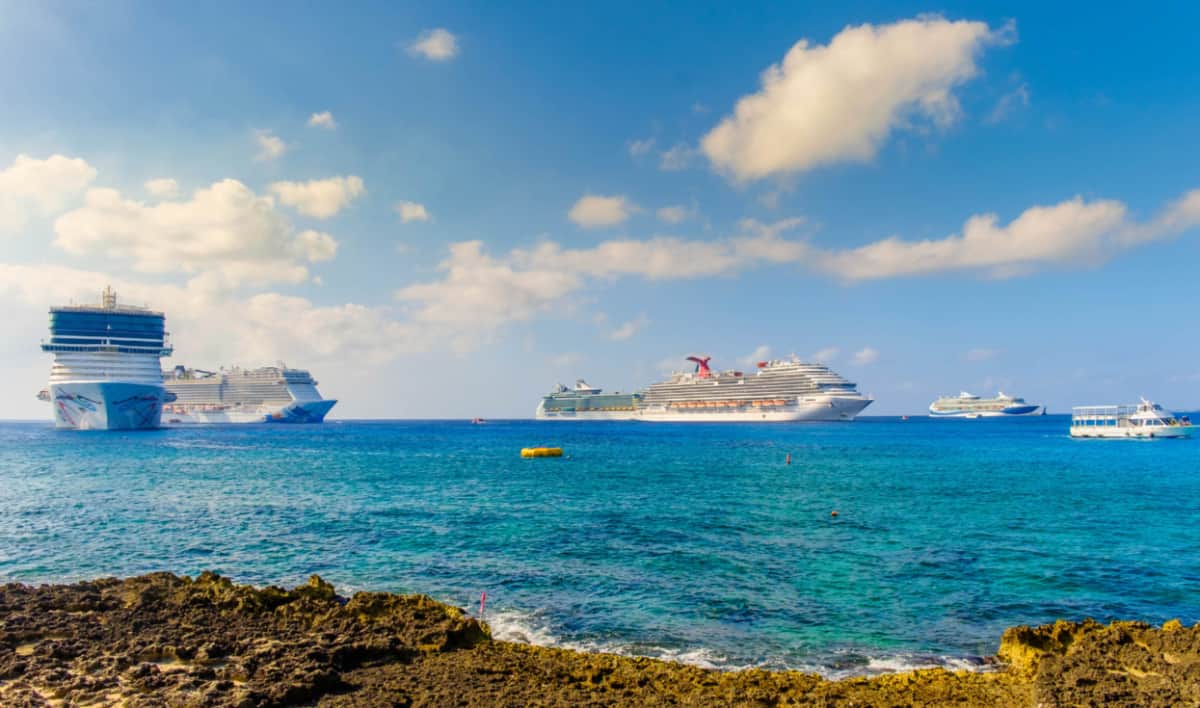 It’s time to get your weekly cruise news update and it’s been a mix with developments on two cruise ships in need of repairs, cruise ships finally making a return to Grand Cayman, the last voyage for another Fantasy class ship, another canceled sailing for Norwegian Escape and a new Miami-themed area for Carnival’s next mega-ship.

It’s been a long wait, but finally cruise ships have started returning to Grand Cayman in the Western Caribbean after two years. the Disney Magic became the first cruise ship back on March 21, 2022.

Guests received a warm welcome as they disembarked via tender boats. Disney Magic visited with about 2,500 passengers on board. The Disney cruise ship visited Grand Cayman as part of a five-day cruise that departed PortMiami, Florida on March 19.

Carnival paradise and Carnival Sunrise had the honor and are the first of several Carnival cruise ships to visit the island in the coming weeks. Both ships anchored at Grand Caymon on March 23.

Celebrity Cruises will bring four of its ships to the Cayman Islands next month. Celebrity benefit on April 1 and 13, Celebrity Equinox on April 17, Celebrity Summit visited on March 24 and will call again on April 7, and celebrity reflection March 30.

Ships from Disney Cruise Line, Holland America Line, MSC Cruises and Princess Cruises are also scheduled. Following the Cayman Islands government’s decision to lift the cruise ship ban, a total of 21 ships will visit from Monday, March 21 through April 17. At that time, the next phase of restarting cruise ship traffic will begin.

More guests have now been affected due to Norwegian Getaway stranded on departure from Puerto Plata in the Dominican Republic on March 14, 2022. The cruise line has informed passengers that their March 26 departure from Port Canaveral has been cancelled.

The reason given by NCL was that the repairs were taking longer than expected. The March 26 voyage was originally scheduled to be a 7-day Caribbean itinerary, and Puerto Plata was to be the voyage’s first port of call, after a day at sea.

Other calls have included St. Thomas in the US Virgin Islands, Tortola in the British Virgin Islands and Norwegian Cruise Line’s private island in the Bahamas, Great Stirrup Cay. The itinerary was also to include a total of two days at sea.

Although the cruise line did not provide an update on the extent of the damage to Norwegian Getaway, the vessel was rated after being freed from the sandbar and remained moored in Puerto Plata while guests returned home. The grounding and damage have already led to the cancellation of the March 12 and 19 departures.

While Norwegian Getaway will still be sailing a limited number of Baltic routes this spring, most of her European routes have been canceled and the ship will be redeployed to Port Canaveral, Florida more like mid-June.

This follows the cruise line already opting to withdraw St. Petersburg, Russia, from its Baltic sailings immediately after the situation in Eastern Europe began in February. Norwegian Cruise Line was the first major cruise line to make such sweeping changes to its itinerary, but other cruise lines have followed suit. Then, on March 15, the line chose to remove Norwegian Getaway entirely from the region.

We now know that the ship will officially leave Europe on Tuesday, June 14, 2022, departing from Copenhagen, Denmark, en route to her summer home port. The 13-day itinerary will end in Port Canaveral on June 27.

Norwegian Getaway will now offer a variety of Caribbean itineraries during the summer months, ranging from 5 to 10 days depending on departure date. The ship will continue to offer Caribbean cruises through November, before repositioning to New York for the winter, where it will offer Bermuda and Caribbean cruises.

The news of Carnival feelingThe ship’s retirement first erupted in early February when it was announced that the ship would not restart passenger operations. The ship was previously scheduled to begin sailing from Mobile, Alabama on March 7, 2022, but those sailings have been reassigned to carnival ecstasy.

First of all, Carnival feeling was simply delayed, but it was quickly confirmed that the ship would not return to service. The ship was put up for sale and quickly sold for scrap.

Carnival feeling deceased from her holding position in the Bahamas on March 18 and is currently sailing across the Atlantic Ocean for the last time. Her arrival at Aliaga demolition in Turkey is scheduled for April 4, 2022.

Although the ship has not welcomed passengers since the start of the industry-wide pandemic shutdown more than two years ago, Carnival feeling has served the cruise line well in recent months. Instead of making commercial voyages, the ship was used to house crew members transitioning in and out of periods of quarantine and isolation.

Carnival feeling first entered service in 1993 as the third of the Fantasy-class ships. The ship weighs 70,367 gross tons and has a capacity of 2,052 passengers, with 920 crew members.

The cruise line is plan repairs Carnival Glory on the next voyage leaving New Orleans on Sunday, March 27, 2022. A letter was sent to guests advising them that repair work would begin on the ship’s mooring machinery on Sunday.

Due to ongoing work during the cruise, the planned stopover at Mahogany Bay, Isla Roatan, Honduras on Wednesday March 30 has been cancelled. The port will be replaced by Progreso, Mexico on March 29.

No other details of the repair work were detailed in the letter, but Progreso would be the obvious choice for repairs on a Conquest-class vessel.

Located in Progreso is a repair shop by Italian shipbuilder Fincantieri, the same company that built the Carnival Glory in 2003. The jetty at Progreso is also much larger than at Mahogany Bay.

There are no other changes to the seven-day Western Caribbean itinerary, which also includes three days at sea, as well as a scheduled stopover in Belize on March 31 and then Cozumel, Mexico on April 1st. Carnival Glory will return to its homeport of New Orleans on April 3.

New thematic zone on the celebration of carnival

Carnival Cruise Line revealed new details on a distinctive themed area that will be unveiled on board the next Excel class Carnival Celebration. The new area will pay homage to the cruise line’s headquarters, the ship’s main home port and where Carnival Cruise Line began – Miami.

The Miami-themed neighborhood will be called “820 Biscayne” – after the address of Carnival’s original headquarters – and will celebrate the culture, architectural styles and flavors of the hometown where the line was founded in 1972.

The area will include the same features as sister ship Mardi Gras’ La Piazza area, including popular specialty restaurants Rudi’s Seagrill and Cucina del Capitano, though their layouts and decor will be revamped with a tropical Miami vibe. Similarly, the 24-hour pizzeria and deli restaurant on the ship will also have more colorful and themed appearances. Bar 820 will also offer Miami-themed drinks.

Carnival Celebration is currently under construction at the Meyer Turku shipyard in Finland and will debut in Miami in November 2022.

it was just another busy week of cruise news! We have even more exciting coverage, including a Royal Caribbean cruise ship return to the United States after 10 yearsa new location revealed for Disney Wish, Tornado approaches cruise ship in New Orleans, three Royal Caribbean ships sailing in australia in the 2023-24 season, relaxed CDC rules and much more.