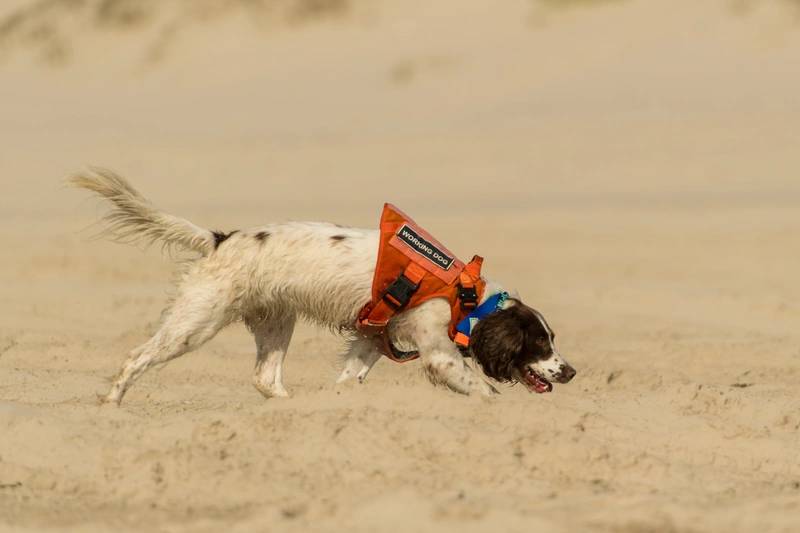 Man’s best friend has long earned its place in the service of humans when it comes to hunting, herding, providing protection or aiding in research.

At the Center for Coastal Studies (CCS), housed within the Texas A&M-Corpus Christi College of Science and Engineering, a team is currently focused on training Bin to differentiate between natural weathered oil (tarballs) and cooler crude oils (example: oil slicks) up to one meter below the sand. As a control dog, Poppy learns to detect any presence of oil. Poppy is managed by Paul Bunker of Chiron K9 while Bin is managed by citizen scientist Mike Price who adopted Chiron K9’s dog.

“The canines are extremely accurate and can detect very small amounts of oil in austere conditions,” said Aaron Baxter, CCS II research specialist and principal investigator of the study. “They are fast, precise and economical. They can be deployed via vehicles, planes, helicopters and boats to survey locations.

If the study is successful, it will provide the State of Texas with a new tool for conducting beach oil surveys. Baxter says the canines can cover large areas quickly and locate surface and buried oils better than any machine.

“There is currently no technology that can replicate the efficiency and effectiveness of the dog,” he said. “A dog can treat an acre area in 3 minutes while a team of humans have to dig pits every 10 meters to determine if there is oil.”

Baxter adds that while canines have been used for this type of work in other areas/environments, this study specifically investigates the ability of oil-sensing canines to be trained to respond only to fresh oil. (reversed) and to ignore any natural samples (tar balls) that wash up on Texas Gulf beaches. The program operates under the direction of the Institutional Animal Care and Use Committee TAMU-CC, which provides institutional oversight and reviews of research activities involving living vertebrates.

Baxter said the idea for an oil detection study is based on pioneering work by Bunker and Dr. Nathaniel Hall of Texas Tech University.

“Paul and Nathaniel worked to train dogs to detect specific types of crude oil in a lab,” Baxter said. “Our project takes dogs from the lab to the field.”

Mueller, a Round Rock native, said she originally came to Island University in the fall of 2017 with the intention of studying marine biology in hopes of one day working with the Dolphins. Her plans changed once she learned of the impact of oil spills on coastal ecosystems and she decided to make a difference as an environmental science major. For this Oil Detection Canine project, Mueller focuses on facilitating communication between handlers and researchers and also assists with shoreline profiling.

“Working with Bin and Poppy has been an amazing process,” Mueller said. “Dogs are considerably better at this job than humans. It was very interesting to be involved in this innovative project.

Baxter says the goal is to increase the number of canine oil-spotting teams across the state and that the CCS is willing to train volunteer citizen scientists who can also serve as “forever homes” for dogs. . Baxter says the four-week training process is time-consuming, but much of it can be done virtually. However, the on-field training portion requires the team to be on the beach with the professional trainer to achieve certification.

“The handler team, once certified, can also participate in other spill/oil events around the world,” Baxter said.

For details on becoming a manager in the study, contact Aaron Baxter at [email protected]