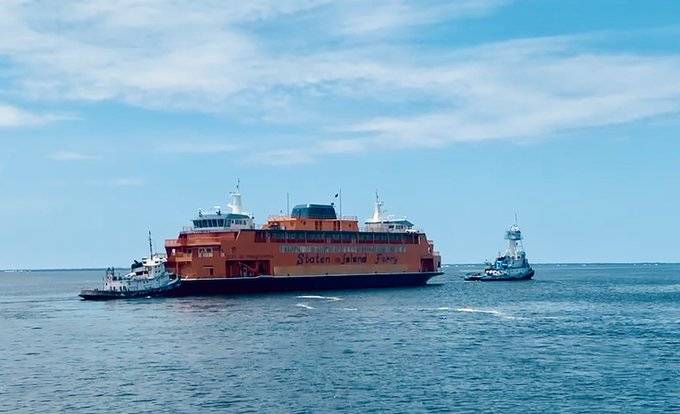 Col. de Dann Ocean Towing tows the ferry for a 12-day trip to New York. On arrival, the ferry will be staged at Caddell Dry Dock for cleaning and another round of testing and training. It is expected to start carrying passengers in the fall.

Staten Island’s new Ollis-class ferry series are named after a fallen soldier of the U.S. Army’s 10th Mountain Division at Fort Drum, ‘Climb to Glory’, Army Staff Sgt. Michael H. Ollis. Ollis, a native of Staten Island, was killed protecting his comrades from a suicide bomber in Afghanistan on August 28, 2013 while serving in Operation Enduring Freedom. Hull 219, the first in the series, is named in his honor.

â€œWe are proud to deliver the Staten Island Ferry MV SSG Michael H. Ollis to New York City fully certified and passenger ready. It is the first vessel in the modernized fleet and benefits from the most advanced technology and environmental engineering in the maritime industry. It has been an honor for Eastern to build this class named after one of our fallen heroes and deliver state-of-the-art ships for the world’s busiest ferry route. This iconic ship carries millions of tourists and residents every year. This is a vital marine infrastructure project that was proudly built by hard-working American ship designers and builders, â€said Joey D’Isernia, President of Eastern Shipbuilding Group.

The new ferries are larger, reflect modern technology and will operate more safely in extreme weather conditions. They feature popular design cues from older Staten Island Ferry ships and new customer service amenities such as more comfortable seats and phone charging sockets and an oval upper deck promenade that will first serve as ” ‘outdoor walking track for the ferry. riders. They have the latest marine technologies in terms of energy efficiency and respect for the environment. There are design features on the ships that are part of the emergency response plan with the city. The lessons of 9/11 have been incorporated into this fleet and they can be connected to the New York Fire Ships, also built by Eastern Shipbuilding Group, to support evacuations and rescue.