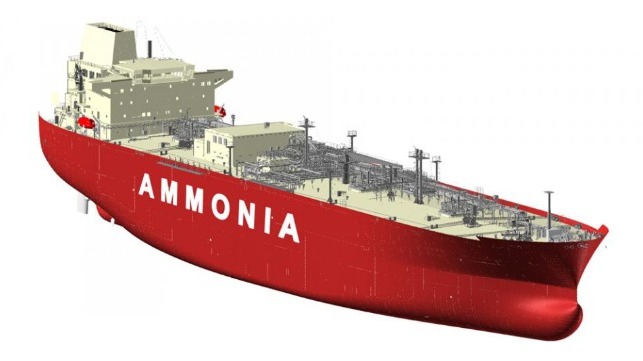 In the race to develop commercial ammonia technology for the shipping industry, South Korean companies Hyundai Heavy Industries and Korea Shipbuilding & Offshore Engineering Co. jointly received the first approval in principle for the design of the vessel. an ammonia transporter with ammonia propulsion. The design was developed in partnership with Bureau Veritas, which issued the AiP, and is part of South Korea’s strategy to strengthen leadership in high value-added segments of shipbuilding.

According to Bureau Veritas, the South Korean design was developed to ensure compatibility with existing infrastructure for ammonia, while also reflecting market demand for very large gas carriers (VLGCs). It builds on HHI’s experience in the transport of liquefied petroleum gas (LPG).

The vessel will be 745 feet long with a beam of 120 feet and a maximum submarine depth of 77.5 feet. HHI said it uses dimensions similar to its current 91K VLGC design. The ammonia transporter will be equipped with four prismatic-type cargo tanks with a total capacity of 91,000 cubic meters. No details were announced on the plans of the ship’s machinery.

Matthieu de Tugny, President Marine & Offshore at Bureau Veritas, said the issuance of the AiP demonstrates that this is a feasible solution that will support the effort to achieve net zero carbon shipping. â€œWe are delighted with the positive outcome of this partnership, and we are delighted to see this cooperation pave the way for further successes for HHI and BV in technological development for the new construction market. “

This design has been optimized for the safe and efficient transport of ammonia in a single shipment, thus maximizing the competitiveness of shipowners, both in terms of CAPEX and OPEX. HHI said special attention has been paid to the safety of the vessel and crew and the management of ammonia toxicity.

Won Ho Joo, senior executive vice president and technical director of Hyundai Heavy Industries, said they believe this design will help HHI secure a leadership position as a supplier of ammonia propulsion technologies, so that interest in ammonia as a marine fuel continues to grow around the world. .

Earlier this month, the South Korean government unveiled its new “K-Ship” program designed to build and maintain the country’s leadership as a premium shipbuilder. President Moon Jae-in is committed to supporting the shipbuilding industry to ensure it is the overwhelming leader focused on building new environmentally friendly ships and automated technologies. Ammonia is one of the technologies South Korea is targeting for the future of the shipping industry.