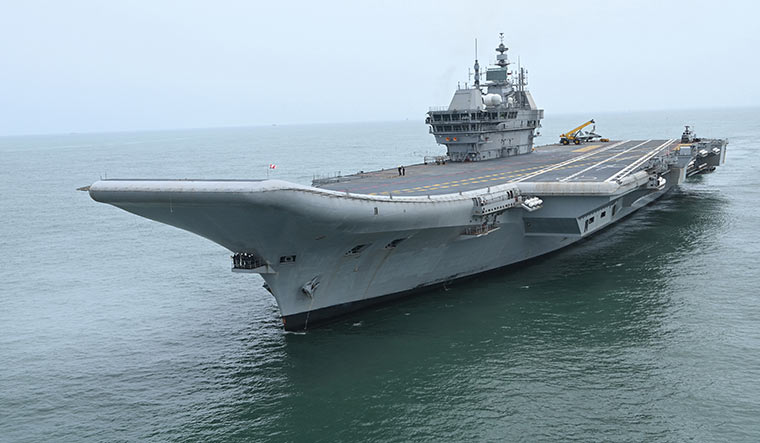 When George W. Bush invaded Afghanistan in 2001, among the first weapons platforms he moved was the battleship USS Carl Vinson. Sending a warship to invade landlocked Afghanistan? For those uninitiated in maritime strategies, it would have looked like an Iznogud misadventure. This was not the case.

Majestically stationed somewhere in the still troubled Persian Gulf, Carl Vinson sent Super Hornets and Tomcats in squadrons from his deck to pulverize the cities of Kabul, Herat and Mazar-e-Sherief. The precision bombs these warplanes dropped on the already scorched Afghan land brought down the Taliban’s command and control systems and sent their troops fleeing into caves in the Tora Bora mountains. So much so that Northern Alliance troops, who had bravely but unsuccessfully fought the Taliban for half a decade from the Panjsher Mountains, could enter Kabul and occupy the city without having to fire a single shot. of fire.

It’s an aircraft carrier. She (ships are women, even if they are called Vikramaditya, Carl Vinson, Admiral Gorshkov or Charles de Gaulle) is not just a weapons platform in the sea, but a repository of awesome power that can be projected to control and dominate thousands of square miles of ocean surface and depths, all of the airspace above, and hundreds of square miles of dry land on the coastline and even at inside.

The transporter is the queen of the sea. She almost never moves alone. Like a queen, she moves with a large escort – from a fleet of small warships, patrol boats and even supply ships. She welcomes the admiral of the flag-bearing fleet, the powerful lord of the sea who is greeted by all the ships and sailors he meets. Fixed-wing aircraft occasionally take off from her deck, declaring her superiority over all the seas, airs and lands they can survey, while deep-seeking helicopters scan the depths for underworld. enemy sailors. Even flies and fries, quite literally, fall on the radars and sonars of his escort group. She reigns over everything she oversees.

The Indian Navy, which already owns and operates one of the largest aircraft carriers in the world, is set to welcome its second queen, INS Vikrant. Although smaller than the in-service Vikramaditya (originally Russian Admiral Gorshkov), Vikrant will wear the halo of having been built at home, at the Cochin shipyard, practically next door to the Indian Navy’s Southern Command. and THE WEEK Publishing Center. “Aren’t you the one of THE WEEK?” I remember Admiral Vishnu Bhagwat suddenly turning to me as he was chatting with a few of us on board his special flight from Mumbai to Delhi in November 1997. We were returning after commissioning India’s first new generation warship, INS Delhi, a proud milestone in the annals of India’s maritime history. “I have something that might excite you. We have implemented that ADS [Air Defence Ship, as the project was called at that time] will be built at the Cochin shipyard.

The commissioning of INS Delhi, the event we had witnessed that morning, had been a turning point in the country’s efforts to indigenize its major weapons systems. With this, India proved to itself and to the world that the country, which still lacked a design engineering culture, could build a complex weapon system acceptable to the armed forces. The Arjun battle tank had already been made, but the army was quite delicate about it, complaining of overweight, barrel heating, fire control problems, etc. The light combat aircraft (later Tejas) was still on the drawing board, and many wondered if it would ever fly. With all this, the morale of the military scientists was at an all-time low.

The commissioning of INS Delhi changed the narrative. Indian naval engineers and designers, both civilian and military, have proven that they alone can design, engineer, build and deliver a warship that will prowl and watch the blue waters well into the 21st century. Although far less toasted in the media and among the public than the first all-Indian car to roll out of Tata’s factories a year later, INS Delhi quietly announced to the world that India was coming of age, despite the instability politics that was the talk of the cities during those years of coalition governments. The sight of the ship sailing majestically through the vast waters off Mumbai has instilled a new sense of self-confidence in the state system itself.

It was this self-confidence that led military leaders, ministry babus and politicians from the Inder Gujral cabinet to award the transport contract to a civilian shipyard that had until then only built freighters. Needless to say, this decision made site masters in St. Petersburg, Glasgow, Marseilles and elsewhere in Europe and America green with envy. One could understand if Mazagaon Docks, Garden Reach or even Goa Shipyard, all three of which had built frigates, destroyers, corvettes, patrol boats and submarines for the Indian Navy, had been given the task. But no, the navy brass chose a civilian shipyard, a relative newcomer to the European and American yards that had built warships by the hundreds for decades, for the job. This showed the confidence that the Indian sea lords had and have in the civil industry of the country.

The navy fared much better when it came to arms procurement. While the Army and Air Force are yet to recover from import fever, the Navy has not only tried to place most of its orders from Indian industry but has also joined teams industry in the design and manufacture of weapon platforms.

With its own design office and crews rubbing their starched white uniforms with DRDO nerds and grease-soaked technicians in shipyards, the Navy has transformed itself into a navy of builders. Even in the case of armaments, the navy largely preferred homemade objects to imported toys. He happily accepted the torpedoes, underwater sensors and weapons, propulsion systems and stealth technologies developed at home. Perhaps the only disappointment was when the navy dismissed the homemade naval Tejas as underpowered and requested imported fighters on the deck of Vikrant, but that’s another story to be told another time.

Now Vikrant is about to receive his commission and sail under the Indian naval ensign and profess the sea control doctrine of the Indian Navy. Traditionally, the Indian Navy has followed the doctrine – to control the waters it can – against the western neighbor’s underwater doctrine of sea denial. Many still debate one or the other, but the fact is that these doctrines are essentially based on the nature of the territory and waters that each navy must guard. Blessed with a long coastline that offers far more ship maintenance facilities, India can follow maritime control doctrine with surface ship fleets, carrier-based task forces, and more. On the contrary, Pakistan, with a very limited coastal strip, is forced to follow the sea ban doctrine with an emphasis on submarines.

With new digital technologies allowing far more doctrinal flexibility than when wars were fought with iron and nitre alone, these doctrines are also being revisited. The debate over whether to have more aircraft carriers or submarines is more like the debates medieval knights had over whether to carry the spear or the sword. The answer is: wear both, if you and your mount can.