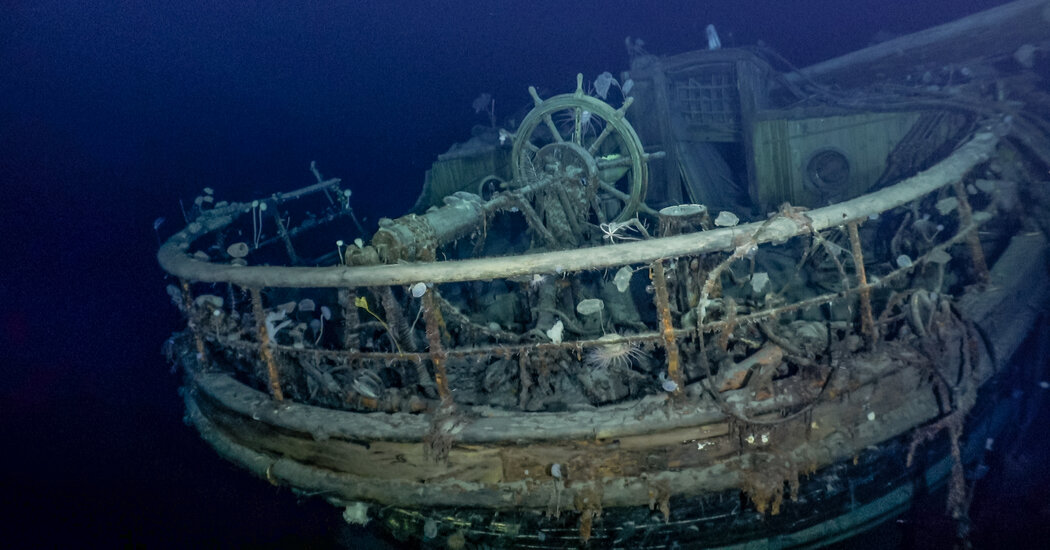 When perhaps the most famous wreck of Mensun Bound’s long career as a marine archaeologist was discovered, he was observing penguins a mile away.

It was the afternoon of March 5. Mr Bound was traveling on an icebreaker in the Weddell Sea in Antarctica with the Endurance22 Expedition, which was searching for the century-old remains of Ernest Shackleton’s ship Endurance.

Technicians had run an underwater drone around the clock for two weeks, scanning the seabed with sonar for the 144ft wooden vessel, which was crushed in the treacherous Weddell pack ice and sank in 1915 when of Shackleton’s ill-fated attempt to be the first to cross Antarctica.

So far, there had been no signs of endurance under the ice-covered waters, and there were only four days left before the icebreaker was due to return to Cape Town harbour. Mr. Bound, the director of exploration who previously described Endurance as “the most inaccessible wreck ever” due to its location in one of the most remote and icy seas in the world, and John Shears, the expedition leader, needed a break.

“We had talked about getting off the ship to stretch our legs,” Mr Bound said in a later interview with Reach the World, a non-profit educational group that produced streaming videos from the ship. for classrooms. “And we decided today was the day.”

At 4 p.m., they walked to an iceberg embedded in pack ice about a mile away. The view was stunning and there were even a few Adélie penguins nearby to keep them company.

When they returned to the ship, they were summoned to the bridge, where they met Nicolas Vincent, who was managing the underwater elements of the expedition. He was holding his phone so they could see a picture on it, Mr Bound recalled in the interview. “And he said ‘Gentlemen, I want to introduce you to Endurance.'”

“That was the first great shot of it,” Mr Bound said. “I mean, it was amazing.”

As he and Mr. Shears left the ship, the drone returned some intriguing sonar images. Unlike some previous false alarms, upon closer inspection it was obvious that it was a ship, lying more or less upright on the seabed. It could only be Endurance.

The image Mr Vincent had on his phone was the first of the ship since the famous photographs taken by Shackleton photographer Frank Hurley as the Endurance was ravaged by ice.

Battling sea ice and freezing temperatures, a team of explorers and researchers have tracked down Ernest Shackleton’s ship that sank in Antarctica in 1915.

Four days later, the discovery was announced to the world, along with the release of some photographs and a short video. Endurance, whose sinking led to one of the greatest stories of leadership and survival in the history of exploration, with Shackleton and his 27 men all reaching safety, was in relatively pristine condition, his name still engraved on the stern, the glass still intact in the portholes, caulking still visible between the planks of the hull.

Mr Bound, whose archaeological credits include the excavation of a 2,600-year-old Etruscan ship in Italy, described the remains of Endurance as ‘the finest wooden wreck I have ever seen – by far’.

The expedition, financed to the tune of more than 10 million dollars by an anonymous donor, left South Africa aboard the icebreaker Agulhas II in early February. He arrived on February 16 at the search site, a 150-square-mile area that had been chosen based on Endurance’s last known position, which had been determined by Shackleton’s captain and navigator, Frank Worsley.

A previous expedition three years earlier ended in failure when technicians lost contact with the underwater drone and it was not recovered.

This time, the expedition had two newer drones, a main and a backup, which were flat torpedo-like pieces of equipment about 13 feet long and 5 feet wide with thrusters that allowed them to move. in all directions.

Like those of the previous expedition, these drones could operate autonomously, programmed in advance with coordinates and a search pattern. But unlike previous equipment, these were attached to the ship by a thin fiber optic cable several miles long that could be unwound as the drone moved towards the seabed. The cable transmitted images to the ship in real time, but could also be used to send new instructions to the drone to alter its course if necessary.

Chad Bonin, who oversaw the operation of the drones, said in the same interview as on March 5, the main drone – named Ellie, for Elephant Island, where Shackleton and his crew first sailed safely after the Endurance sinking – had done about 30 dives. .

There had been some glitches early on, Mr. Bonin said. The fiber optic cable broke during a dive and had to be re-spliced. Cold water and high pressure at 10,000 feet caused problems with one of the thrusters. There were also issues with the winch used to lift the drone, which weighed over 3,000 pounds, out of the water.

“Once we worked out the issues and everything, it was great after that,” Mr. Bonin told Reach the World. “From then on it was just dive after dive,” he added. Each dive lasted between four and eight hours, with several hours to recharge the drone’s batteries.

The drone carried radar equipment on either side, which scanned a mile-wide swath of the seabed while traveling about 225 feet above. Mr Bonin and others monitored the footage, staring at computer screens in a cramped operations center in the ship’s hold.

“The seabed in the Weddell Sea is pretty much flat,” he said. “So anything out of the ordinary would come across as a red flag.”

For two weeks the team saw some interesting things, but upon closer inspection all images either turned out to be natural features or were ruled out as not Endurance.

Even as the deadline to leave the research site approached, Bonin remained optimistic.

“Every day I would walk across the bridge and say, ‘Today is the day,'” he recalled.

When he first saw the image on March 5, he was excited but cautious. “My first reaction was – Hah! We found it. But we have to check. It didn’t take long to be convinced.

The drone returned to the ship and technicians replaced the sonar equipment with a high-resolution camera and laser survey device to perform very detailed analyzes of the site.

Mr Bound expected the wreck to be well preserved, given the cold water and lack of parasitic worms which eat wood and have wreaked havoc on wrecks elsewhere.

Combined with the clarity of the water, the drone’s camera revealed remarkable detail. A crewman’s boot was seen in one location. Elsewhere, the footage clearly showed where some of the ship’s timbers had been sawed off for use on the ice. The camera was even able to look through portholes in some cabins.

Images and scans will be used for teaching materials and exhibits.

“We came, we saw, we measured in detail,” Mr Bound said. Then they left without touching anything because the wreck is protected by the 60-year-old Antarctic Treaty.

Before leaving the Weddell Sea, the expedition team and ship’s crew celebrated with a party on the ice, setting up a large tent with food, drink and music.

The icebreaker is now sailing to Cape Town and is expected there in about a week.

On Friday, the ship called at Grytviken, a former whaling station on South Georgia Island. Shackleton and five of his crew had reached the island in May 1916 after a 16-day, 800-mile voyage across the Southern Ocean in an open lifeboat.

After arranging the rescue of the remaining crew from Elephant Island, Shackleton had returned to Britain to be welcomed as a hero. He then organized another expedition to Antarctica and returned to South Georgia in 1921 where he died of a heart attack at age 47.

He is buried there and members of the expedition team have visited his grave, leaving new images of his ship against the granite headstone.

Stefanie Arndt, a scientist from the Alfred Wegener Institute in Germany who was aboard the ship to study how the ice in the Weddell Sea could change as the world warms, describes the visit on Twitter.

“We ended this historic expedition yesterday with a visit to South Georgia,” Dr. Arndt wrote. “Here we visited the grave of Sir Ernest Shackleton – and brought his ship back to him by pictures.

“A moving end to a long story.”