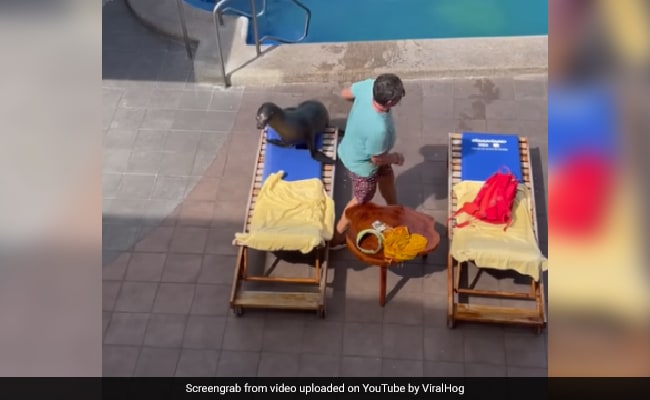 A sea lion sneaks into a swimming pool and surprises a man sunbathing on a poolside lounge chair.

A video that has gone viral on social media shows a sea lion sneaking into a swimming pool and surprising a man sunbathing on a poolside lounge chair.

The video was posted by ViralHog on YouTube with a caption, “Sea Lion Comes on Land, Swims in Pool and Steals Man’s Chair.”

“Ey bud.. I’m back, not sure if management told you but this is my chair,” one user commented.

“He knew exactly where to go. He did that often. This is probably where he settles daily. He is so cute,” another user commented.

While a third said, “You’re polluting my ocean, I’m stealing your chair.”

External auricles, long front flippers, the ability to move on all fours, short dense hair, and a broad chest and belly are the distinguishing features of a sea lion.

Sea lions belong to the family Otariidae, which also includes fur seals. In five genera, there are six living species and one extinct species (the Japanese sea lion).

Sea lions are estimated to eat up to 8% of their body weight in a single meal (approximately 6.8–15.9 kg). In the ocean, sea lions can move at speeds of up to 30 knots (56 km/h) at the fastest. The Australian sea lion, Galápagos sea lion and New Zealand sea lion are all endangered species.