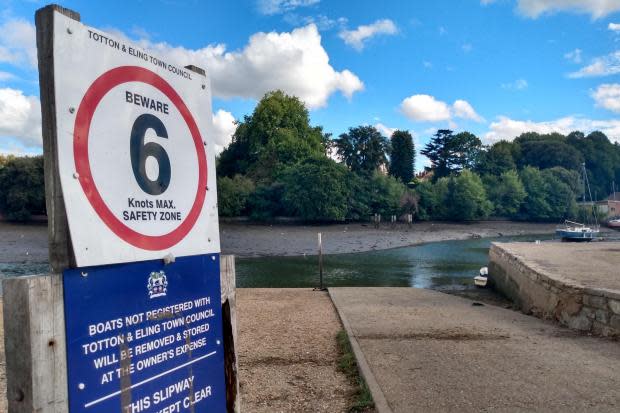 SAILORS are demanding action after a ‘life-threatening’ incident in which teenage jet skiers targeted dinghies taking part in races near Eling Quay.

Members of the Eling Sailing Club say at least one jet ski repeatedly went within inches of the craft, narrowly avoiding a collision and leaving crews soaked.

The club was forced to abandon one of the races, fearing the teenagers’ behavior could cause an accident.

Vice Commodore Ron May said: “A jet ski came dangerously close to the dinghies, risking serious injury or even death, before pulling away at the last minute.

“It was deliberate intimidation. We got very wet but no one went in the water.”

Mr May said the incident involved around six young people who were using a public slipway near the Anchor Inn last Saturday.

“Someone on the shore called the police, who had been there for some time.

“It was a particularly serious event but not an isolated one. This kind of thing has been going on for years and it is an accident waiting to happen.

“We like to see people enjoying the creek, but it seems the only way forward would be to ban jet skiers from the slipway.”

The incident sparked calls for jet skiers to be banned from launching their craft from a slipway in Eling.

Several people took to social media to express their anger over what happened.

One person said the teenagers took turns harassing the sailors by roaring past them, which resulted in water being sprayed over the dinghies.

Totton adviser David Harrison, who had discussions with Mr May, added: “Almost every summer I receive reports and complaints about anti-social jet ski conduct at Eling.

“I fear one day we may have a really serious incident involving injury or even death.”

Cllr Harrison said jet skiers could be banned from using the council-owned slipway, but added: ‘I’m hesitant to go that far just yet as there are jet ski users using it responsibly.”

Ten dinghies were caught in the incident, which happened between Redbridge and Goatee Beach. Social media users said a paddleboarder was also targeted.

One person posted: “It was awful to watch. There will be a terrible accident soon.”

A police spokesman said a jet skier who allegedly acted anti-socially was questioned by officers and given “appropriate advice”.

A message from the editor

Thanks for reading this article – we appreciate your support in reading the Daily Echo.

Subscribing to the Echo means you have unlimited access to the latest Saints news, features and coverage – all with a lightweight advertising website.

You will also have full access to Saintsmoreyour new home for Southampton FC tactical analysis, features and more.

Don’t just take my word for it – subscribe today.