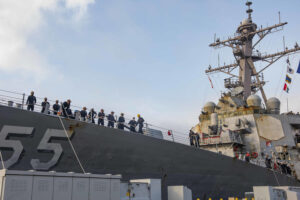 Petty Officer 3rd Class Edmund Di Liscia, a Jewish soldier aboard the aircraft carrier USS Theodore Roosevelt, had previously received a religious exemption to avoid shaving in 2018, and received a temporary restraining order in April. He and three Muslim sailors are seeking religious accommodations to wear beards while on duty, rather than depending on temporary allowances.

Di Liscia said other sailors threatened to hold him down and forcibly shave his beard.

â€œMy desire is to continue serving my country,â€ Di Liscia wrote, according to Algemeiner. â€œI don’t want to be in a position where I have to choose unnecessarily between serving my country and staying true to my religious beliefs. I also want to allow other Orthodox Jews to enlist in our army and serve their country without having to give up their religious commitments.

The Navy offered religious exemptions, but they were short-term and in danger of being revoked. The Navy generally does not allow beards due to concerns about facial hair interfering with the seal on a gas mask. Earlier this year, First Lt. Sukhbir Singh Toor was the first Sikh member of the Marine Corps to receive religious accommodations regarding his beard and turban unless deployed to a combat zone, according to Religion News Service.

â€œThe past few years have seen tremendous progress in efforts to ensure that members of minorities and vulnerable or historically excluded groups are welcome into public service,â€ said Ahmad Maaty, president of Muslim Americans in Public Service. “Religious minorities do not need to be placed in a position of choice between their faith and public service.”