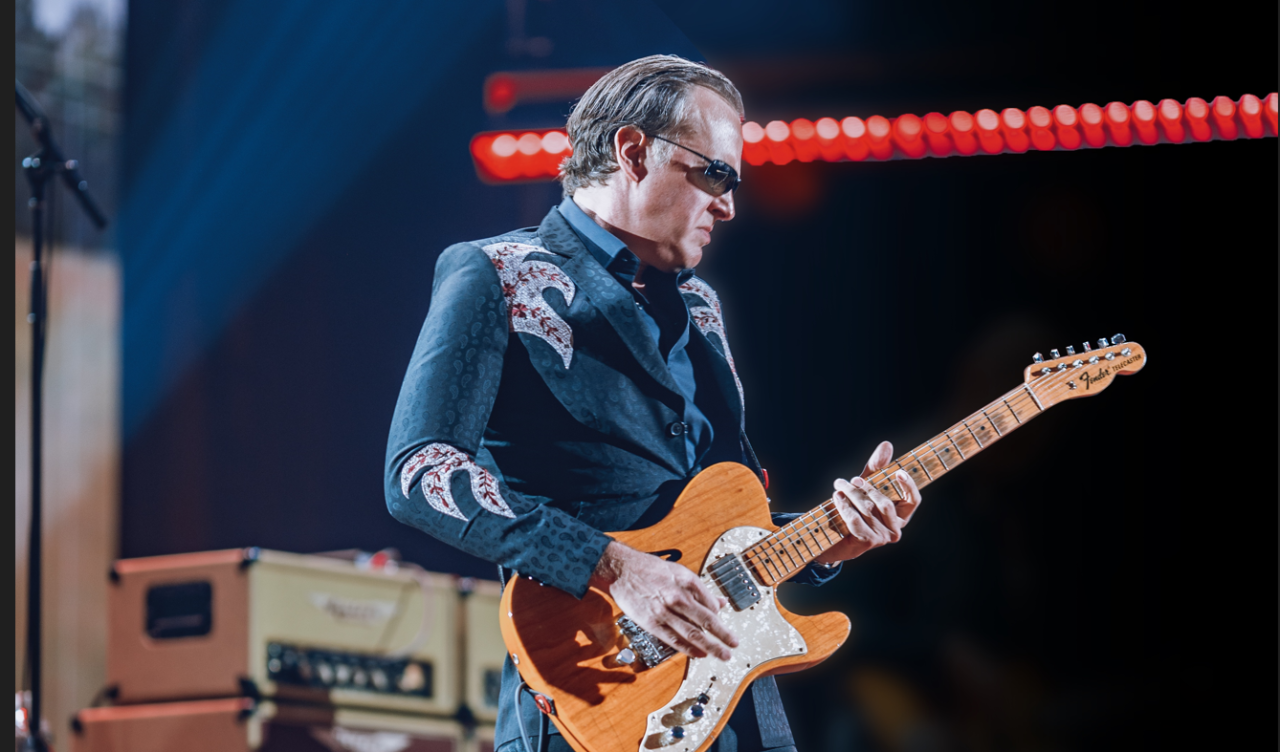 Joe Bonamassa is not only to keep the blues alive, but also to help keep the music industry alive.

The 45-year-old internationally acclaimed guitar wizard and singer-songwriter returns to the Adler Theater in Davenport on Wednesday, November 9. It’s part of his 22-date fall tour, which kicks off tonight (November 1) in Springfield, Mo., including two-night stands at the Chicago Theater, the Orpheum Theater in Minneapolis and the Paramount Theater in Seattle.

“Clocks” is Bonamassa’s 25th No. 1 blues album on Billboard, billed as his “rawest, rockiest album to date.”

“Each time he releases great albums, not just because of his guitar magic and his often striking voice and songwriting, but because he challenges himself and his fans. with each new adventure.

The review said the new one is “no different, an exciting, expansive and moody record that’s big on production”.

The blues great is a New York State native who opened for the legendary BB King when he was just 12 years old and has since performed alongside artists such as Eric Clapton, Stephen Stills, John Lee Hooker, Warren Haynes, Steve Winwood, Peter Frampton and Buddy Guy, among others. BB King might not have guessed it at the time, but this 12-year-old prodigy would go on to become an industrial powerhouse.

Glad to be back

Bonamassa said in a recent interview that he was excited to resume touring, which was put on hold for artists around the world by COVID in 2020.

“It’s nice to be back and the social interactions are starting to become more normal,” he said, noting that he’s been performing concerts at full capacity since August 2021 and has done 120 shows up to now. here. “It’s more like it was.”

“The break obviously was a punch in the face for everyone,” he said of the COVID shutdowns in 2020. “It’s very difficult to go from such a hectic pace for so many years to nothing. It was just a brick wall. But every time I go on stage in front of people, I’m satisfied. It is a privilege to do this. It is an honor and a privilege.

Bonamassa’s “Royal Tea” was recorded in January 2020, before COVID. “At the time, no one had the slightest idea that a gigantic steel door was going to close on everyone,” he said. “It feels so good, it was going to be a great year, a great decade, and then it happened.”

The “Royal Tea” album marked Bonamassa’s third Grammy nomination and was recorded at the iconic Abbey Road Studios in London.

In 2020, Bonamassa delivered a groundbreaking live performance from the legendary Ryman Auditorium in Nashville, where he played royal tea in its entirety to over tens of thousands of people around the world via live streaming, recording the full set of the live concert film and album In service: royal tea straight from the Ryman, released in 2021.

He said he worked at Abbey Road around half a dozen times, including once with the London Philharmonic and another time with drummer Ginger Baker (co-founder of rock band Cream).

In February 2021, he followed up at The Hit Factory in New York, which is “Time Clocks,” released last fall.

Folder, American songwriter said, “Bonamassa is stepping into new territory while remaining within a blues-based setting” and “there is more than enough evidence in this sprawling ensemble that Bonamassa has no intention of resting on his laurels or taking his star status in the blues-rock genre for granted.

From the title track, guitar world wrote: “Although emotional, vibrato masterclass solos definitely give people what they want, [the song’s] the climax comes in the form of a downright tasty opening riff, straight from Nashville.

To date, he has raised and distributed $700,000 to hundreds of working musicians, whose livelihoods have been devastated by COVID.

“We had to do something; I’m in a privileged position – even with the shutdown, I could still pay my lighting bill,” Bonamassa said. “We just got together and started raising money for a good cause.”

“He went to all genres – heavy metal, blues, hip-hop, we didn’t care,” Bonamassa said. “We call ourselves Keeping the Blues Alive, but it’s more like keeping the music alive. Everyone was fighting for their survival.

“And $1,500 moved the needle for some people — it helped keep the wolves out of the door,” he said of the individual grants.

The foundation has been around for over 10 years, originally designed to help music programs in schools, and it still does.

“For me, it’s all about how kids view music,” Bonamassa said. “Let’s help them. This is the definition of a philanthropic organization.

He does not mingle with Blues Foundation, which he says is doing a great job sponsoring the International Blues Challenge. He has judged a few over the years.

“It’s one of the few times of the year when you can actually hear blues music in Memphis, Tennessee,” Bonamassa said.

While waiting for the green light to go on tour, Bonamassa launches his “Live from Nerdville” video interview series, is now preparing for its third season, where it has interviewed a wide range of guests ranging from big-name musicians, industry leaders and legendary entertainers, including Dion, Paul Stanley, John Oates, Brad Paisley, Jeff Garlin, Ben Folds and Peter Frampton as 50th Episode Guest Star.

“Live From Nerdville” streams to over 5 million fans on Bonamassa’s social media, as well as all podcast platforms.

Bonamassa had a radio show on Sirius for years, but started interviewing people remotely in 2020. He had everyone from Paul Stanley to CNN’s SE Cupp Brad Paisley.

“I just picked up my phone and said, ‘Hey, do you want to be on the show? ‘” he said during the recent interview.

He recorded on average once a week, and that decreased as he got back to touring.

“Because I’ve been interviewed so much, I think I’m doing a decent interview,” Bonamassa said. “It’s just a conversation between musicians, that’s how I’ve always operated.”

Among his favorite guests were comedian Jeff Garlin, who he says takes over completely, as well as Harry Shearer and Paul Shaffer. Bonamassa is a huge “Simpsons” fan, so Shearer was a special treat.

“These are talented people doing things they excel at,” he said of his interview topics. “It was a fun experience interviewing people outside of the guitar. I’ve been doing this for 40 years, but to get into the acting side, the broadcasting side, it’s interesting to me because it’s an extension of the entertainment industry.

“Whether you’re on TV telling jokes or playing blues guitar, it’s all an extension of that,” Bonamassa said.

Among his musical guests, he said it was great talking with Todd Rundgren and Mark Farner of Grand Funk Railroad. Their “We’re an American Band” (1973, produced by Rundgren) is “one of the most iconic American rock anthems of all time,” Bonamassa said.

“Todd is a brilliant producer and really had his finger on the pulse of the music industry at the time,” he said. “You always hear, it’s the right song at the right time, produced by the right person.”

One of the biggest fundraisers for the Keeping the Blues Alive Foundation, Bonamassa hosts a bi-annual (twice a year) music festival cruise “Keeping The Blues Alive At Sea”, which has been selling out for the past six years since his creation.

Live music cruises usually sail through the Mediterranean and one in the Caribbean, launched in 2014.

They are back to the normal cruise schedule (usually February/March and late summer). The next, already sold out, they have Little Feat. Bonamassa has included Peter Frampton, Keb Mo, among many great artists.

Bonamassa’s Keeping The Blues Alive Records has released albums for many artists including musical icon Dion’s blues with friendsChicago guitar queen Joanna Connor 4801 South Indiana Avenue and Joanne Shaw Taylor Blues from the Heart Live. All three albums debuted at No. 1 on the Billboard Blues Charts, while blues without you by Larry McCray debuted at No. 2.

His life was documented in the movie “Guitar Man”, released in the winter of 2020. Bonamassa pulls back the curtain on his incredible career, letting us see his remarkable musical accomplishments and pioneering style. With behind-the-scenes interviews and live concert footage featuring some of the biggest names in music.

Collectively, Bonamassa has over 40 albums to date with studio and live recordings, collaborative albums with blues sensation Beth Hart and her adventurous side projects: Black Country Communion and Rock Candy Funk Party.

Tickets for the Adler show at 8 p.m. on November 9 are between $42 and $202, available HERE. For more information, visit the artist’s website.