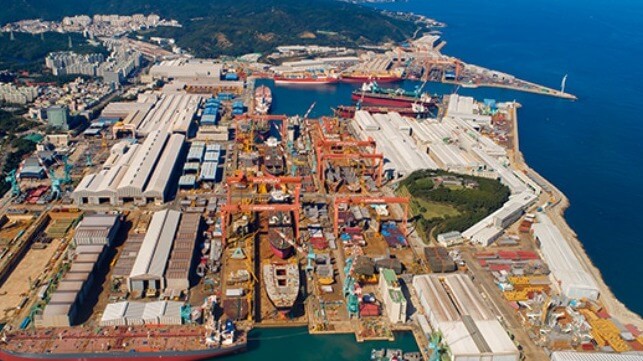 The South Korean government is exploring new ways to support its shipbuilding industry and build on the slim lead it has developed in recent months against competition from Chinese shipbuilders. The heads of South Korea’s three major shipbuilders, Korea Shipbuilding & Offshore Engineering, Daewoo Shipbuilding & Marine Engineering and Samsung Heavy Industries, met with Lee Chang-yang, Minister of Commerce, Industry and Energy on Friday to discuss ways to work with government to advance the industry

South Korean media say that among the topics they were discussing was the chronic labor shortage. After downsizing operations in the mid-2010s, shipyards would struggle to find skilled labor to beef up their workforces to meet the influx of orders. The government recently announced that it would increase limits on certain categories of foreign workers to fill some of the gaps in shipbuilding and other industries. Reports say shipyard leaders have called for further relaxation of regulations on foreign workers as well as additional training programs, with Minister Lee promising that details would soon be announced on the government’s additional efforts to meet the challenges. workforce challenges.

According to Korea’s Joong Ang Daily, Lee urged CEOs to make preemptive investments so Korean shipbuilders can maintain global competitiveness. He promised that the government would focus on policies in the areas of expanding the workforce, developing technology and creating a better business environment. In return, he said shipyard leaders had pledged to invest $176 million this year in the development of green maritime technologies, including ammonia-powered ships, as well as digitalization and automation. , as Korea looks to maintain its lead in high-value ships.

The meeting on the future of the shipbuilding industry came as data was released showing that South Korean shipyards received the highest percentage of construction orders in July for the third consecutive month. naval. Citing data from Clarkson Research, the ministry said South Korea won 55% of total orders by tonnage (1.19 million tonnes) in July, including 19 of 70 ships ordered globally.

In the first seven months of 2022, South Korean shipyards added more than 11 million tons to their order book, made up of orders for a total of 204 ships. It accounted for 47% of orders placed in 2022 and overtook Chinese shipyards which received orders for just over 10 million tonnes or a total of 383 ships.

South Korean shipbuilders now collectively have an order book of over 35.8 million tons, or a total of 717 ships. The ministry pointed out that the backlog has increased for 11 consecutive months, up more than a quarter from July 2021.

Clarkson reports that orders for large LNG carriers (over 140,000 m3) were the highest in 22 years, with South Korea leading the order. Major shipbuilders received all orders, a total of 12, placed in July for LNG carriers, pushed by Qatar’s efforts to move forward with its planned expansion. Other segments, including container ships, tankers and bulk carriers, all reported lower orders in July.

The government’s focus on high-value vessels was well justified, with around half of all orders placed in July falling in this segment and it continues to grow. They pointed out that the average price of an LNG carrier also reached a new record high of $236 million per ship. In addition, the Koreans also drew attention to the fact that environmentally friendly ships accounted for 60% of total orders placed.

The three major shipbuilders told the ministry that, based on order strength, they are ahead of target for the year. Combined, they said they won orders worth more than $30 billion in the first seven months of 2022. That puts the industry 87% away from its annual target which calls for orders of $35 billion. in 2022. Beyond South Korea’s Big Three, the ministry also reported strong growth among medium-sized yards. They said these yards had received nearly $2.5 billion in orders, mostly for container ships and smaller tankers.

Minister Lee reportedly stressed at the meeting the importance of government and industry working together to support the growth of Korea’s shipbuilding industry.