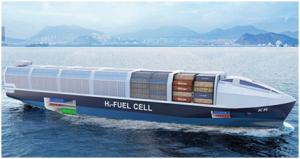 Samsung Heavy Industries plans to test a liquefied natural gas (LNG) transporter powered by solid oxide fuel cells (SOFCs) in the second half of this year. The shipbuilder plans to test the LNG carrier at the LNG demonstration facilities at the Geoje shipyard.

SOFCs are a fuel cell that uses solid oxide as an electrolyte. SOFCs developed by Samsung Heavy Industries use LNG as fuel, replacing current internal combustion engines. They do not require many devices needed in conventional ships and emit a smaller amount of harmful substances and greenhouse gases. Previously, Samsung Heavy Industries had developed SOFCs in collaboration with Bloom Energy of the United States and obtained approval in principle (AIP) from the Norwegian-German ship classification society DNV.

The current competition in the development of fuel cell technology among Korean shipbuilders should help them secure a lead in the market for next-generation green fuel cell vessels. Europe is currently considered a world leader in environmentally friendly fuel cell ships. Europe began to develop technologies in the early 2000s and is now at the level of operating such vessels.