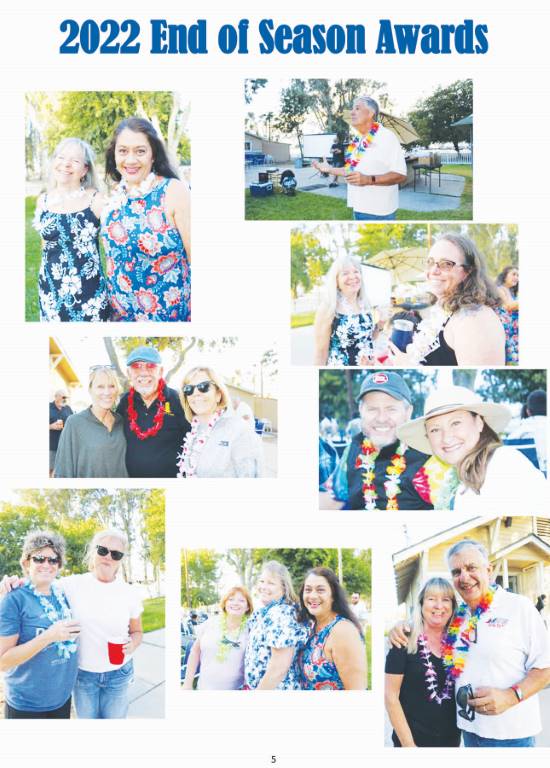 It was a short sailing season for the Lake Yosemite Sailing Association; however, the crowd that attended the annual awards night was out in force. The reservation-only Asian dinner served almost 70 people and the weather welcomed the crowd with a great evening by the lake.

The first place of the racing season went to Jerry Johnson, who coincidentally hosted dinner with Norm Martin. The two of them teamed up as social chairmen for the season.

There were only seven boats that raced during the season, with a promise of more participation next season if the water level in the lake remains high.

Rachel Hadley, the Association’s race captain, was the MC for the evening. She announced that she would give up the job next year because “I want to race”.

Debbie Harden, House Captain of LYSA, praised her helpers for their hard work in keeping the house clean and up to the highest standards.

Commodore Jay Sousa said the club had done well under the circumstances and he introduced next year’s Commodore Thom Grimaldi, a longtime member.

The Sailing Association maintained a membership of approximately 70 families or over 200 if all family members were counted.

John Derby presented a special award to Owen Cooper for being the youngest boat captain at the age of 13. He was a graduate of several sailing classes.

Craig Anderson’s work as a gardener and caretaker was much appreciated.

Kendall Nightengale was thanked for his work as Dock Captain.

The Lake Yosemite Sailing Association is only possible because of the volunteers who come to help with their programs. The association leases its property from the Merced Irrigation District while Merced County holds the lease on the park itself.

In normal years, LYSA holds an annual regatta in the spring and a prawn feeding in the summer, but due to fluctuating water levels, the regatta and prawn feeding have been postponed to next year.

Club membership is open to the public. Simply go online for the monthly newsletter and information on how to sign up. The club also maintains and rents the docks at a very low cost per season.