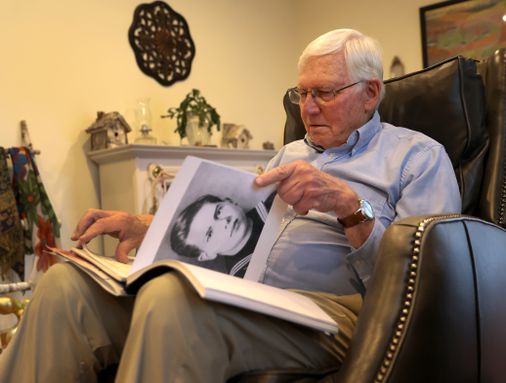 “He came into the service early because he chose it,” said Joseph S. Makarski Jr. of Rockland, Mr. Sadlowski’s 81-year-old nephew.

“He wasn’t supposed to be on the ship that Sunday morning,” he said of his uncle and the supreme sacrifice he made for his nation. “It wasn’t his time. But he was volunteering for a friend. So he switched places. That’s what happens sometimes in life.”

And sometimes what happens in death — beyond heartbreaking grief and kneeling grief — are the open wounds and unanswered questions that linger hauntingly over the decades.

There were few details of his death and fate after the USS Oklahoma was hit by multiple Japanese torpedoes and quickly capsized that fateful Sunday morning.

Instead, the family received a telegram from a Navy official.

“After an exhaustive search, it was impossible to locate your son”, Rear Admiral Randall Jacobs, Chief of the Office of Navigation, wrote. “He was therefore officially declared dead in the service of his country effective December 7. The department wishes to express its deepest sympathy to you.”

There was a memorial parade in his honor. There were written and heartfelt tributes.

But, still, there were questions.

“My grandmother had a picture of him on the dresser in the dining room,” Makarski said. “But did I know him? No. My mother spoke highly of him. My father loved him. That’s all I can tell you.”

Roman Sadlowski was born in Greenfield before the family moved to Pittsfield. He then went to work for General Electric, a job which allowed him to adapt quickly in the service to his duties as a second electrician, third class.

After the attack on Pearl Harbor, after President Franklin D. Roosevelt declared December 7, 1941, “a date that will live in infamy”, the Navy spent three years recovering the remains of the deceased crew of Oklahoma.

At first, only 35 servicemen were identified – the rest being buried in 46 plots at the National Cemetery of the Pacific in Honolulu. A military council ruled those who could not be identified as unsalvageable.

“My aunt wrote to the Navy in 1941,” Makarski recalls. “Did they know where he was? What happened? He was first listed as missing. Later he may have been listed as killed in action. But they didn’t know. They didn’t have all the components.”

But thanks to decades of painstaking detective work, the identification work continued. After the army received permission in 2015 to exhume them, 13,000 bones were analyzed. The results have been cataloged.

Work was slowed by lost or misplaced documents and the difficulty of working in watery graves. But the work continued nonetheless.

“For me, it was amazing because of the amount of technology that was used,” Makarski said. “So we took a cheek swab and sent it over. That’s mitochondrial DNA they’re using.”

“I don’t think most people know how far the military went with this stuff to determine the identities of all these people,” Makarski told me. “It’s a new technique that allowed them to do this stuff.”

But, in the end, it worked. An identification has been made. The family was alerted.

“Now it is no longer identified as a mission in action,” said Nina Makarski, wife of Joe Makarski. “Because now he’s been identified.”

Identified by the remains of his right femur, a tooth, his left fibula and part of his left hip.

“I was excited for them to attempt identification, but I didn’t know if we would ever get there,” Joe Makarski said.

And now, thanks to painstaking forensic detective work, they have.

“One of the things that impressed us was when they sent the results of the DNA they had taken from Joe and all his sisters to see the similarities between brother and sister and how they used to identify their uncle,” Nina Makarski said. “I thought it was a bit unbelievable.”

Over the decades, through all this precise and painstaking forensic work, the science had paid off.

And now the family of Roman W. Sadlowski is preparing for a final blessing, a final tribute, a final farewell for the young man from Pittsfield who went to war and never returned.

At his funeral on Monday there will be tributes and tears, solemn salutes and the mournful sound of a bugle playing tap dancing.

His family, including cousins ​​and his sister Maryann Rammage from Texas, are preparing for a trip to Washington and burial at Arlington National Cemetery. A cemetery marker will note Roman Sadlowski’s service aboard the USS Oklahoma.

“It won’t be long – maybe 30 minutes,” said Joseph Makarski. “We forgot that they have a lot of people in this country and they can do 11 or 12 funerals a day until they run out of space.

“But we will never forget it. And that’s why we’re thrilled to be here. A lot of people at 81 can’t necessarily get on a plane and get off.”

But he knows the proper respect and he knows how deep this final farewell will be.

“He did this before the enrollment deadline,” Makarski told me. the ship this Sunday morning.

“It was not his time. But he was volunteering for a friend. So he changed places. That’s what happens sometimes in life.”

This is also what happens in the story.

Thomas Farragher is a columnist for The Globe. He can be contacted at [email protected]