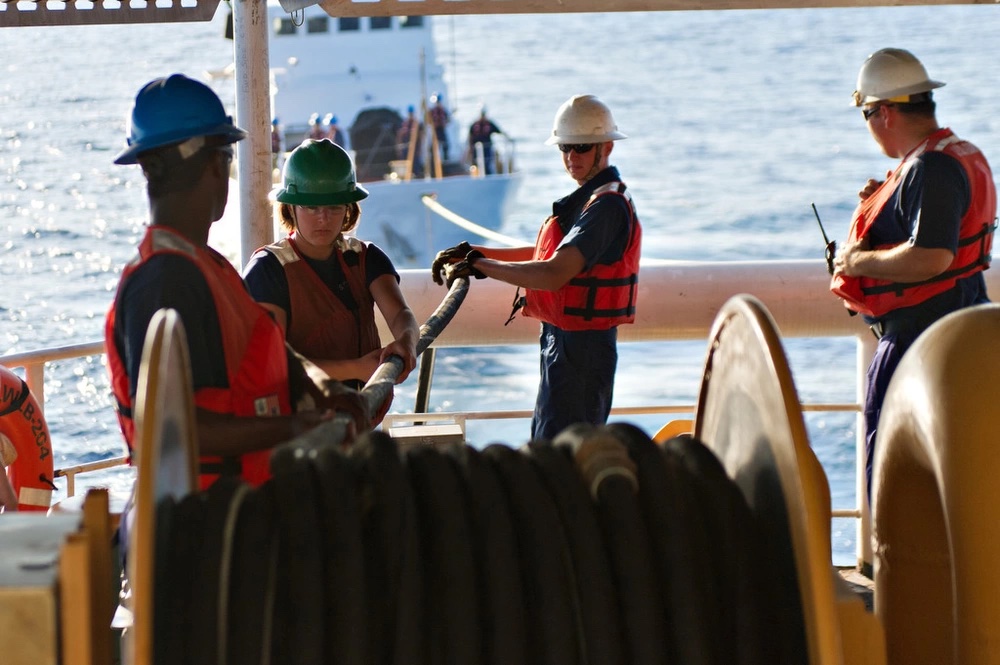 The Coast Guard’s Office of Investigation and Analysis has issued Marine Safety Alert 06-22, to address the effects of water and other contaminants in fuel systems that can adversely affect the operation of any vessel.

A tug operating in a forward-thrusting configuration suffered a loss of all propulsion while navigating the Mississippi River. The loss of propulsion occurred approximately three hours after departure and approximately 3.5 hours after receiving fuel from a shore facility. Fortunately, there was no major damage to the ship, nor any injuries among the crew members due to this accident.

Subsequent investigation of causal factors revealed that the vessel’s fuel tanks and engine fuel system were heavily contaminated with water. The amount of water contamination was so great that the ship’s engines initially suffered a reduction in power and eventually shut down completely, resulting in a complete loss of propulsion.

Since ships began using liquid fuels over 100 years ago, ship operators and engineers have long been aware of the dangers associated with contaminated fuels. Fortunately, advances in fuel quality standards and in-vehicle purification/filtration systems have resulted in less frequent accidents resulting directly from fuel contamination. However, improvements have also been made to engine design, resulting in precise machining and smaller clearances in parts such as fuel pumps, bearings, cylinders, burners and injectors. Contaminants such as sediment and water can adversely affect equipment designed to run on clean, waterless fuel. Additionally, since fuel is constantly being consumed while the vessel is in motion, continuous vigilance in fuel provisioning, as well as system operation and maintenance, is required to maintain a fuel schedule. quality.

Large vessels often have the advantage of having the space and horsepower to run centrifugal purifiers to ensure high fuel quality is maintained. This is often not the case for small vessels that operate only on rivers or lakes. These vessels often have only one or two filters installed directly in the fuel supply line and these types of filters are not as effective as centrifugal purifiers at removing water.

The effects of water and other contaminants in fuel systems can adversely affect the operation of any vessel. From large, internationally operating commercial vessels to inland tugs and pleasure craft, failure to ensure a water- and contaminant-free fuel supply can have devastating consequences.

The Coast Guard highly recommend that ship owners and operators:

• Ensure that fuel reserves (bunkers) meet engine manufacturer’s specifications for
important parameters such as viscosity and cetane number, as well as any regulations
requirements such as flash point and sulfur content.

• Include regular sampling and testing of fuel oil from service tanks as part of a
maintenance system.

• Ensure that fuel filters have the correct flow rate and filtration rating (micron), and that a sufficient supply of spare filters is kept on board.

• Consider the use of dual filter systems to allow switching from clogged filters to clean filters, as well as the use of differential filter pressure gauges to monitor the condition and cleanliness of the filter element.

• Consider using a water sensor in the diesel tank or filter system to monitor the water content of fuels. These sensors can be combined with displays and alarms to indicate excess water and are generally more effective at detecting increased water content than periodic manual sampling.

• Ensure that a means is provided, usually by an arrangement of valves and piping, to periodically sample fuel received during bunkering.

• Have a plan in place to recover from any engine stoppage that occurs due to water
contamination in the fuel. Fuel that is severely contaminated with water or other impurities has the
potential to cause engine damage in a number of ways, including later
contamination of the lubricating oil system.

Accident Investigators, Marine Inspectors and Inspection Personnel are encouraged to remain alert to these issues and take corrective action if necessary.

This security alert is provided for informational purposes only and does not relieve any national or international security, operational or equipment requirements. Developed by the US Coast Guard Design and Engineering Standards Bureau and based on initial recommendations from the New Orleans, LA area. Distributed by the Office of Investigation and Analysis. Questions can be sent to [email protected] or by phone at (202) 372-1375.