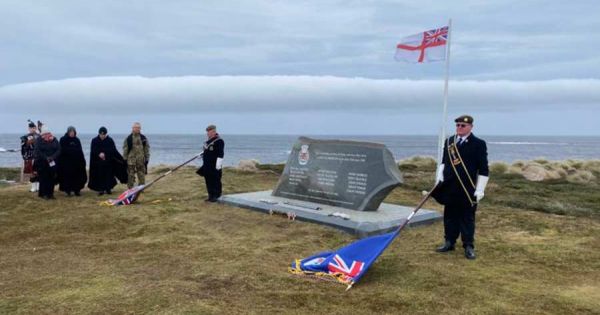 The Falkland Islands mark forty years since the attack on HMS Glamorgan which killed fourteen crew members. The memorial service took place at the Glamorgan Memorial, Surf Bay, and was broadcast live on Forces News despite appalling weather conditions.

Wreaths were laid at the memorial overlooking the sea where the County Type 42-class destroyer was hit by an Argentine Exocet missile.

Argentine forces fired two Exocet missiles at Glamorgan on June 12, 1982, one of which hit the ship.

The ship had pounded the Argentine defenses outside Stanley on Mount Two Sisters, using her 4.5 inch main guns and supporting a successful attack by 45 Commando, Royal Marines.

The ship’s team helped minimize the impact of the missile, which struck the hangar – destroying the fully manned and armed Wessex helicopter. with the tragic consequences of fourteen sailors killed.

Glamorgan survived and was repaired in the UK. She was later sold to the Chilean Navy.