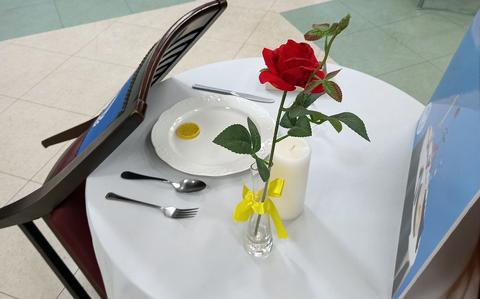 United Nations Command Security Battalion troops set up an exhibit of missing men in the demilitarized zone to honor American prisoners of war and those unaccounted for.

A small round table with a white tablecloth, candle, inverted glass, red rose and other items was prominently displayed in a dining room in the heavily guarded joint security zone between the two Koreas on September 17.

This date, known as POW / MIA Recognition Day, was established in 1979 and is observed throughout the United States and at military bases overseas on the third Friday in September.

The exhibits are intended to symbolize the loss of the military, according to a panel above the painting.

They include a reserved chair placed at an angle to represent the fallen troops and a white tablecloth symbolizing the “purity of their response when they answer the call to serve their country.”

On the table is a rose serving as a reminder of their families; a slice of lemon representing the “bitter fate” endured by the prisoners; salt symbolizing the tears of loved ones; and a candle and a ribbon which represent the hope of their return and their reunion.

The inverted glass represents “their inability to share a toast.”

US Army Lt. Col. Ric Luce, commander of the security battalion, said the symbolism was not tied to a single event.

“The prisoners of war table is a constant reminder of their sacrifice and the unresolved loss of families who can never achieve complete peace,” he said in a statement via the UN command.

More than 81,600 Americans who have participated in conflicts since World War II are still missing, according to the Defense POW / MIA Accounting Agency. Of these, 75% are in the Indo-Pacific region and more than half are believed to have been lost at sea.

The remains of American and Allied troops killed in the 1950-53 Korean War continue to be found on the Korean Peninsula. About 36,500 American soldiers were killed and about 7,500 are still missing.

President Moon Jae-in attended a repatriation ceremony at Joint Base Pearl Harbor-Hickam in Hawaii last week to receive the remains of 68 South Korean soldiers and oversee the transfer of six remains to the United States.