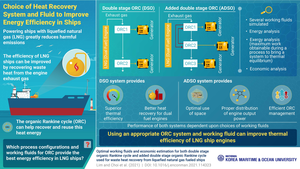 The drive to limit greenhouse gas emissions has increased interest in liquefied natural gas (LNG) ships, which produce considerably less emissions than those running on other fossil fuels. But LNG is expensive, which makes maximizing the energy efficiency of LNG engines paramount for their widespread use.

Currently, LNG ships lose up to 25% of their input heat as exhaust gases. The recovery of this heat is the key to energy efficiency. In a recent study published in Energy conversion and management (posted on May 31, 2021 and published in volume 242 of the journal on August 15, 2021), a team from Korea Maritime & Ocean University, led by Dr Yeong-Seok Choi, has developed two new heat recovery systems that can improve the energy efficiency of LNG ships. Dr Choi explains, â€œBy increasing the energy efficiency of LNG systems, we are making a direct contribution to environmental protection.

The research is based on what is called the “Organic Rankine Cycle (ORC)”. In ORC, an organic fluid is first boiled and then used to spin a turbine to generate electricity, during which it loses heat. The fluid is then condensed and reheated in a continuation of the cycle. In LNG ships, the ORC also allows preheating of cold fuel (LNG is stored at -160 Â° C) before burning.

The research team has developed two heat recovery systems. The first, the Double Stage ORC (DSO) system, uses heat from the engine’s exhaust gases to run two ORCs connected to two generators. The second, the added double-stage ORC system (ADSO), also has a third ORC; in addition, two of his ORCs exchange heat with each other.

The team examined how DSO and ADSO worked with combinations of different body fluids. They then carried out energy, exergy (maximum work resulting from a heat exchange process) and economic analyzes on the systems.

They found that while DSO had better overall fuel efficiency, ADSO was more suited to cramped engine spaces. They also found that performance was highly dependent on the combination of fluids. Overall, the new designs have significantly improved fuel efficiency.

“Although our research is focused on maritime transport, this work can be applied to several other industries and to cryogenic hydrogen research.Explains Dr Choi.

With such innovative designs, energy efficient engine systems may soon become an industrial reality for ships.

South Korea’s most prestigious university for maritime studies, transportation science and engineering, the National Korea Maritime & Ocean University is located on an island in Busan. The university was established in 1945 and has since merged with other universities to become currently the only post-secondary institution specializing in marine science and engineering. It has four colleges that offer undergraduate and graduate courses.

Tae-Woo Lim is a professor at Korea Maritime and Ocean University. He got his doctorate. from Kyushu University in 2002. His interests are cryogenic cold energy, heat exchanger design, two-phase flow heat transfer, and performance analysis of ship equipment.

Da-Hye Hwang is a master’s student at Korea Maritime and Ocean University. Between 2009 and 2017, she was an engineer at the Hanjin shipping company. His interests are phase change simulation using computational fluid dynamics.

Yong-Seok Choi is an assistant professor at Korea Maritime and Ocean University, where he obtained his doctorate. in 2015. His interests are computational fluid dynamics for thermal fluid analysis, thermal system design and performance analysis of marine equipment.

The title of the article

Publication date of the article

The authors state that they have no known competing financial interests or personal relationships that could have appeared to influence the work reported in this article.

Disclaimer: AAAS and EurekAlert! are not responsible for the accuracy of any press releases posted on EurekAlert! by contributing institutions or for the use of any information via the EurekAlert system.