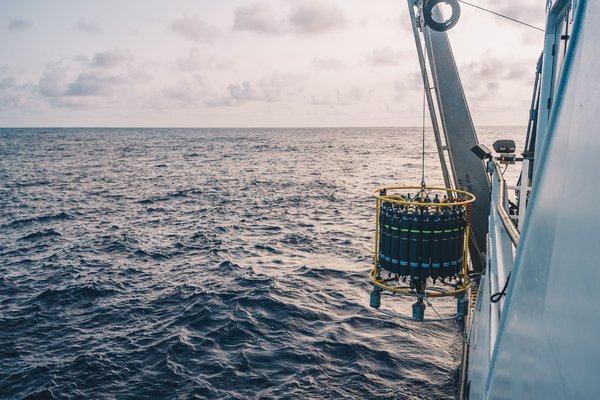 Using a newly developed technique, the researchers ruled out a potential source of old dissolved organic matter (DOM) in the world’s oceans.

DOM is organic material – mostly carbon, but also nitrogen, sulfur, oxygen and other elements – less than about 0.7 micrometers in size (smaller than bacteria) and dissolved in seawater. Since the DOM is a major storehouse of carbon, this finding has implications for carbon sequestration in the deep ocean (generally defined as the area where light cannot penetrate, a depth of about 200 meters). DOM can exist in the deep ocean for hundreds or even thousands of years, although no one knows why it persists for so long.

The new research suggests that the accumulation of DOM in the deep ocean occurs with a negligible input of organic sulfur compounds found in ocean sediments, and thus rejects one of the main hypotheses as to why it persists for so long.

“Our paper helped answer a lingering question about carbon sequestration, rejecting a theory about where some of the old carbon comes from,” says Alexandra Phillips (PhD ’21), lead author of a paper on the research which was published in Proceedings of the National Academy of Sciences (PNAS) on October 7. Phillips is a postdoctoral researcher at UC Santa Barbara, but conducted the research while a graduate student at Caltech with geobiology professor Alex Sessions.

The ocean contains about as much carbon in the form of DOM as there is carbon dioxide in the atmosphere. The DOM is believed to be important for climate regulation because it essentially sequesters carbon for long periods of time.

Phillips tested the hypothesis that extremely long-lived DOMs exist due to reactions with hydrogen sulfide in pore waters (water that passes through sediments on the ocean floor), creating molecules which then seep out of the sediment into the ocean. Such reactions are known to make molecules more resistant to microbial degradation, and scientists have previously linked the creation of “sulphide” organic matter in sediments to cooling events in Earth’s history.

Phillips, Sessions and their colleagues at Caltech, the Scripps Institution of Oceanography and the University of Oldenburg in Germany used sulfur isotopes to test whether these sulphidation reactions were also responsible for a significant portion of the old carbon from the deep ocean.

Phillips spent his time at Caltech graduate school improving techniques for measuring sulfur isotopes. The abundance of stable isotopes in a given sample often gives clues to its source. For example, sulfur most commonly occurs in two forms: the sulfur-32 and sulfur-34 isotopes (the heavier sulfur-34 isotope containing two more neutrons than sulfur-32). Analyzing the relative abundance of each isotope in a sample can tell you a bit more about the origins of the sample. For example, microbes in oxygen-free zones use sulfate (a molecule of sulfur and oxygen) for energy and create sulfide (a negatively charged sulfur ion) as a byproduct. This reaction is faster with the lighter sulfur-32 isotope, which in turn causes the resulting sulfide to have more sulfur-32.

However, for sulfur, the large sample sizes needed to accurately measure the isotope ratio made it an impractical way to study DOM. That is, until Phillips and his colleagues developed a way to analyze sulfur isotopes at very low levels, which decreases the sample size needed by about 10 milligrams of DOM (yielding about 100 micrograms of sulfur ) to about 0.1 milligrams of DOM (yielding about 1 microgram of sulfur).

In concrete terms, it’s the difference between filtering only 10 liters of seawater per sample instead of 1,000 litres.

Their measurement relied on the combustion of small amounts of isolated DOM samples and the precise analysis of the resulting gas mixture using mass spectrometry. This allowed the team to measure the isotopic ratios of each emerging gas in great detail. Caltech’s Sessions Lab has been refining similar techniques for years, but this was the first field test of these new sulfur isotope methods.

“It felt like we were a hammer looking for nails,” Phillips says. “We spent time developing this brilliant method and were eager to apply it to answer a big question. This method really opened the floodgates for possible organic sulfur measurements.”

The team found sulfur isotope signals that did not correspond to a sedimentary source. The samples, taken from the depths of the Pacific and Atlantic oceans, contained far more sulfur-34 than would be expected if the material came from sulphide organic matter. The researchers also noted that as the relative abundance of sulfur-34 decreased in their samples, the samples also showed an overall loss of sulfur relative to carbon. This further refuted the hypothesis that sulphide organic matter was the missing source of the oldest dissolved carbon in the ocean.

Instead, sulfur isotope ratios were almost identical to those found in phytoplankton, the microscopic photosynthesizing organisms that form the basis of the marine food web. The results offer direct evidence that phytoplankton are the origin of sulfur, and indirect evidence for the origin of DOM in general. However, it should be noted that sulfur-containing compounds make up less than 10% of typical DOM.

“Most people who study sulfur just use it as a window into the carbon cycle, but I think this result shows that biology is also where sulfur started,” Phillips says. “Marine organic sulfur is much more dynamic than we expected.”

The PNAS the article is titled “New Sulfur Isotope Analyzes Limit Sulphide Porewater Fluxes as a Minor Component of Dissolved Marine Organic Matter”. Caltech co-authors include Fenfang Wu, lab director; Frank J. Pavia, Stanback Postdoctoral Fellow, Research Associate in Environmental Science and Engineering; and former graduate student Preston C. Kemeny (MS ’18, PhD ’22), who is now a postdoctoral fellow at the University of Chicago. Other co-authors include Margot E. White and Lihini I. Aluwihare of the Scripps Institution of Oceanography in San Diego; Audrey C. Ma of USC; and Michael Seidel and Thorsten Dittmar from the University of Oldenburg in Germany. Funding for this work came from the National Science Foundation, the German Research Foundation (DFG), and the Fannie and John Hertz Foundation.