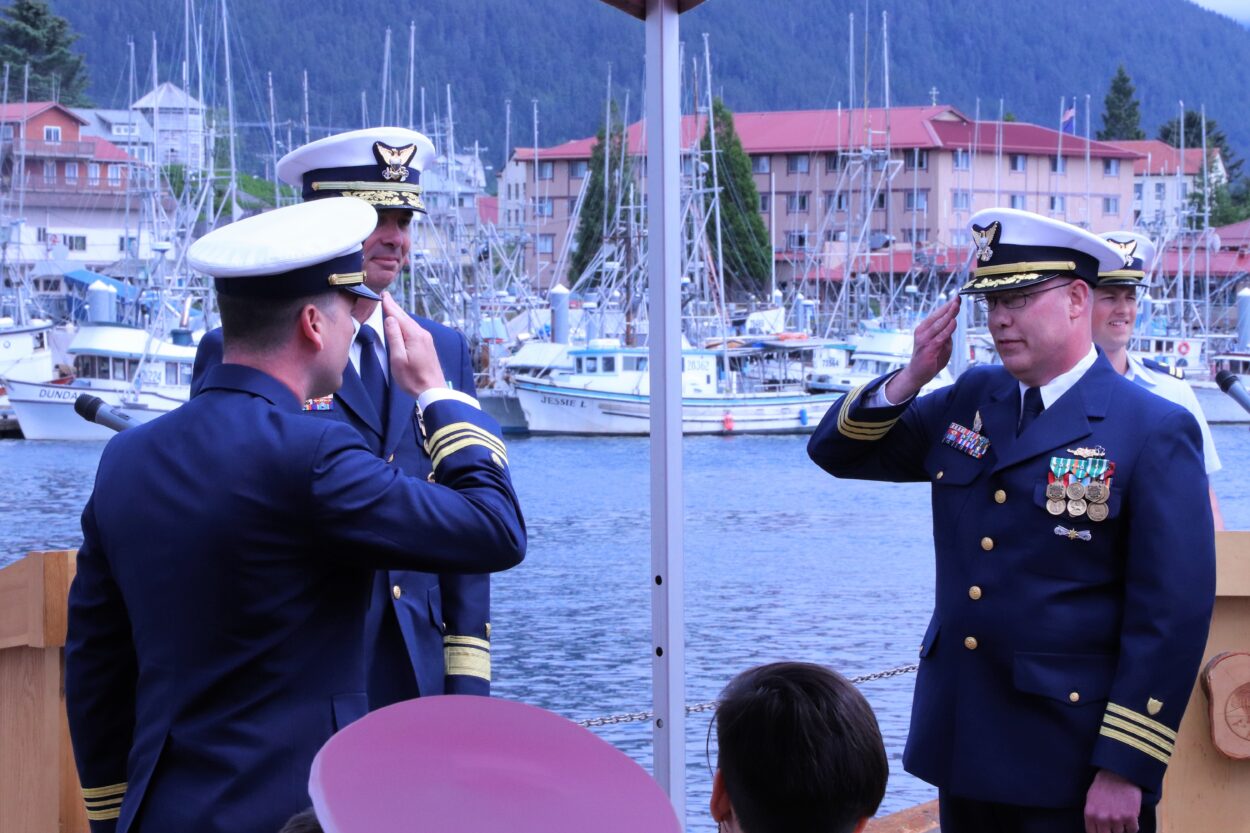 Coastguard cutter Kukui has a new commander. A change of command ceremony was held aboard the Sitka-based buoy on the afternoon of June 30, outdoors, and the ship’s outgoing commanding officer was commended for his service of three difficult years.

KCAW’s Robert Woolsey was in attendance and sent this audio postcard.

To the moving beat of “Semper Paratus”, Commander Raymond J. Reichl handed over the helm of Kukui to Lieutenant Commander Joshua W. Branthoover.

Held aboard the buoy deck of the 225-foot ship, the ceremony is almost as old as the Coast Guard itself.

Reichl reads: “From: Coast Guard Personnel Command to Cdr. Raymond Reichel. Subject: Orders. During the relief, detach yourself and report to the Juneau sector for an assignment as deputy commander of the sector.“

And with a wave and a handshake, Kukui’s 49-member crew has a new captain for the next three years.

The senior officer present was Rear Admiral NA Moore, commander of the 17th Coast Guard District, which includes the entire Alaskan coastline. Admiral Moore praised the outgoing captain of the Kukui for his diligence during an unusually difficult command, which began in 2019 and included the bulk of the coronavirus pandemic. But his remarks were also aimed at the relatively young crew of the Kukui.

In this excerpt, Moore explains that the challenges come with the territory.

When you come to Alaska, everything we do here is hard. And I think that’s a good thing. I mean that in a good way. Do you want to be a young Coast Guard member and do you want to be good at what you do? Come here to Alaska, right? If you want to drive boats, try to do it here in the winter or even in the summer. If you want to be a cutter, try some working aids in these currents and tidal changes, and cross the Gulf of Alaska, and be in the Bering Sea on a ship like this. If you want to be an aviator, fly here in Alaska. It’s really difficult. There’s a reason we only assign aircraft commanders to fly in Alaska, both in helicopter and fixed-wing seats. Because it’s not really a training ground. Like you have to be good at what you do when you get here. This is the hardest place to fly in the Coast Guard. If you want to be a support person, if you want to support operations, this is the hardest place to support operations. You cannot drive and buy coins statewide and in other cities. You can’t drive anywhere in most places in Alaska, can you? If you want to try to get something shipped here, try ordering something overnight while the unit waits for you to get it. It is therefore difficult to sustain operations here. From a young person’s perspective, if you want to be good at what you do, hone your skills, and master your craft, come try it in Alaska. And I bet you’ll fall in love and stay here. Maybe not as long as Ray (CDR Reichl). You probably don’t want to do that. Nine times is not the blueprint for success, career-wise (audience laughs). But you will probably come back. If you don’t like it, we’ll give you orders and send you somewhere else anyway, so don’t worry.

Nonetheless, Admiral Moore said most Coast Guard members who come to Alaska love it and “we can’t get them to leave.” That could be especially true for Commander Reichl, who is leaving the Kukui to serve as deputy sector commander in Juneau — his ninth tour of Alaska and a new record for service. And that may be equally true for his relief, Lieutenant Commander Branthoover, who nearly two decades ago was one of those newly minted junior officers standing to attention on the deck of a another cutter attached to the same wharf.

“Eighteen years ago I arrived in Sitka on June Day, much like today, reporting to my first unit to serve aboard the Coast Guard Cutter Maple,” Branthoover said. “One of the most junior crew members on board, my future ambitions for my career in the Coast Guard were shaped as I built relationships, learned my craft and learned to love the sea. .”

Branthoover inherits a ship with a distinguished record. Over the past three years, the Kukui has patrolled 25,000 nautical miles, serviced over 200 aids to navigation, repaired over 60 defective aids and participated in eight search and rescue missions.

One of these missions in particular remains fresh in the minds of the people of the Southeast, as an official eulogy from the captain of the Kukui reminds us.

As read by the General Manager of Kukui…

Outgoing Commander Reichl received the “Operational Distinctive Device”, which was pinned to his chest by Admiral Moore.

After the ceremony, former and current Kukui officers, crew and about 30 guests went ashore at Eagle’s Nest for a reception.