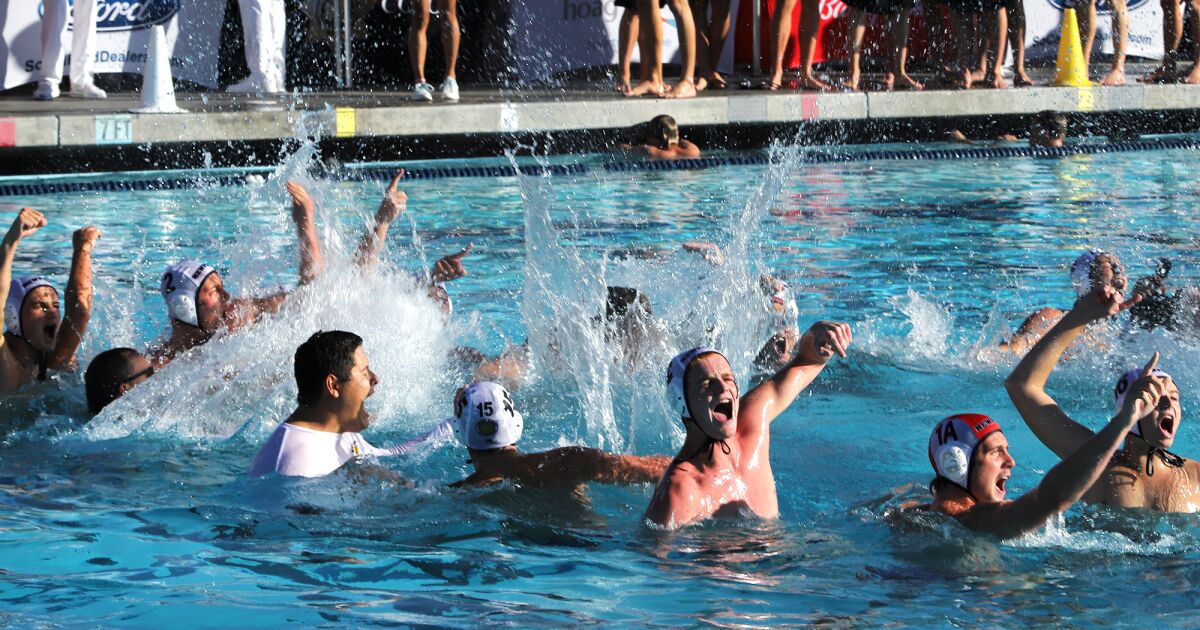 “Next man up” has been the mantra all season for the Newport Harbor High men’s water polo team.

Defending the CIF Southern Section Open Division title would take a team effort. That truth came to life in a very real way on Saturday afternoon as the No. 2 seeded Sailors faced No. 1 seed JSerra for the championship.

Two starters fouled in the second half for Newport Harbor.

The next man, as player after player provided great moments off the bench in the fourth quarter.

Junior Trey Smith scored on a post-up move, before senior southpaw Nick Kennedy scored on a hard shot for a three-goal advantage.

When Newport Harbor needed a defense at the end, another substitute provided it, with junior Jack Wright getting a key block in the field with 20 seconds left after JSerra brought goalie Jack Halfer into the front court .

It all added up to another championship in the Premier Division for the Sailors, who secured a 10-9 victory in front of an overflowing crowd at the Woollett Aquatics Centre.

The second straight title is the 14th overall CIF title for Newport Harbor (28-2).

“I’m so proud of these guys,” said Newport Harbor coach Ross Sinclair, who has now won three Open Division championships (two with the boys and one with the girls) in the last three seasons of high school water polo. “It’s a glove. There is no easy game. We had to fight Huntington, we fought against [Harvard-Westlake] and we had another amazing battle against JSerra. These guys are amazing. Relentless, resilient, any attribute you can name, these guys are.

At the time, he maintained a two-goal advantage.

“We put in hours and hours of practice every week,” said Mathisrud, a starter for two years. “My team has some of the best shooters you’ll see in high school water polo, and I shoot them for a few hours a day, every day. When it comes down to it, I feel more than prepared.

Senior Finn LeSieur had one goal and four assists for the Sailors. Junior center Peter Castillo and junior defenseman Gavin Appeldorn each scored a goal before committing a foul.

Newport Harbor, which had shared two previous encounters this season with JSerra, didn’t bat an eyelid. Senior Gavin Netherton also contributed an assist for the winners and grabbed the rebound after Wright’s late block.

“It’s just filling the role,” Liechty said. “It doesn’t matter who it is. It doesn’t matter what you’re supposed to do, and do it to the best of your ability. I think it was a great situation to overcome, and I think we did it perfectly. Other guys were able to step in and fill that position.

JSerra (27-3) tried to respond, even after Kennedy’s goal gave the Sailors a 10-7 advantage with 3:34 left. A Lions steal led to a breakout goal from junior center Will Schneider. Then Bode Brinkema fended off a quick shot after a Newport Harbor turnover, drawing JSerra 10-9 with 1:50 to play.

But the equalizer never came. JSerra coach Brett Ormsby, 2004 Olympian, paid tribute to the Sailors after the game.

“[The Sailors], they are champions,” Ormsby said. “They were champions before this game. It is reality. They won it last year, and I thought there was determination. Physically, I thought they were more aggressive than us in key moments.

The Newport Harbor players posed for photos after the game. They also got a phone call from Mason Hunt, last year’s senior captain who now plays for Harvard.

Hunt would also be proud of the team camaraderie the sailors have shown this year.

“You can see we all know how to play together,” LeSieur said. “No matter who’s in, no matter who’s offside with three ejections, we can always stay in control and play together. It is a testimony of our brotherhood. You can’t pretend.

There was nothing wrong with the Newport Harbor championship plate. Sailors will now more than likely be the top seed in the CIF Southern California State Regional Division I playoffs, which begin on Tuesday.

They will approach this end-of-season tournament with the same mentality as in each match.

The next man. It’s the kind of attitude that brings a program to 14 CIF championships.

Support our sports coverage by becoming a digital subscriber.