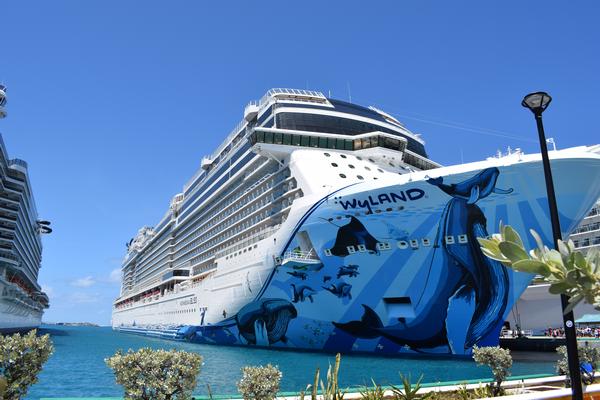 Along with the entire cruise industry, Norwegian Cruise Line’s Bliss entered COVID containment in March 2020. The ship docked in Norfolk, Va. At a deserted container ship port with staff including the captain and senior management. They were stuck on board for five months with no possibility of leaving. Eventually, Bliss was cleared to Manila, where the crew members could be repatriated to their respective countries, while waiting to see when they could return to work.

When the CDC cleared cruise lines to resume limited routes, the ship was ready for its maiden voyage to the Mexican Riviera. Intensive training, new sanitation rules, improved air circulation systems and a goal of 100 percent vaccination of passengers and staff have come into effect. The only way to get a completely safe environment was not to allow children on board. NCL worked with a group of sanitation experts, doctors and scientists to ensure safety. On October 24, 2021, the Bliss returned fully vaccinated with 40% passenger occupancy and 100% crew.

PLUS Cruise Line and Cruise Ship

Part of that Sail Safe effort meant that NCL would quickly test passengers for COVID in the port on the day of departure. Only cruisers receiving a negative result would be escorted onto the ship. While crew members are required to mask themselves, passengers are not. Handwashing stations are located outside the buffet-style dining rooms, with pleasant crew members reminding diners to “wash!” Sanitation stations are everywhere, and the efforts have resulted in a feeling of cruising in a bubble, with safety the number one priority.

Commissioned in 2018, the Bliss still feels brand new with cutting edge technology. Electronic housekeeping message displays are located just outside the cabin doors. The ship might be huge with chic, modern decor, but, once you get to know the terrain, so to speak, it’s easy to navigate. Size may not matter, but age does; the newer the better. Narrow lobbies with recessed cabin entrance door areas induce an upscale hotel vibe. The carpet in the hallways outside the cabins is adorned with fish swimming forward so you know which direction you are walking.

Along with many smaller entertainment venues, Bliss features the full and full Broadway production of SIX the Musical. The endearing and rowdy stories of each of Henry VIII’s six queens not only entertain but educate audiences. Just the second American cast in the world, the six queens were chosen from 4000 auditions. The talent of these six women and the all-female four-piece group is nothing less than the caliber of Broadway. The Jersey Boys are also returning to the Bliss in the near future, which means the ship will have two Broadway musicals on the same route.

Another favorite of the ship is the Beatles cover band at the Cavern Club, a replica of the Liverpool bar where they made their debut. Every show was ORS, so get a seat early. Even the lounges are entertaining with bartenders making creative concoctions. In partnership with Bar Lab, NCL created sustainable cocktails, using ingredients that could normally be left on the cutting board and thrown away. Entertainment can be found on so many levels that you are never far from a favorite genre of music, comedy or interactive event.

The Bliss is home to three main free dining rooms, with the Manhattan Room being the largest, as well as Taste and Savor offering a smaller dining experience, with the same menu and service. You’ll find plenty of specialty premium restaurant options available with French, Italian, Japanese, and Mexican cuisine represented, among others. District, a craft beer bar, of which District Pale Ale is brewed especially for NCL, offers an industrial setting. The lounge / observation deck, which extends to the bow of the ship, has a beautiful setting with floor-to-ceiling windows as well as a light breakfast and lunch buffet. It’s a quiet place to relax and enjoy the sunset and a cocktail, with comfortable seating.

The free Garden CafÃ©, the Bliss’ main buffet, offers a variety of choices for breakfast, lunch and dinner. You’ll enjoy the cute duo serving Danish for breakfast, while singing and talking in unison. The Local Bar & Grill offers another free option in the form of a 24-hour sit-down pub. Starbucks is a paid option if you just need a shot of their familiar java. Other specialty restaurants include Teppanyaki, a Hibachi-style setting with talented cooks serving up charm, comedy, and delicious culinary creations.

Port excursions are available in the Mexican Riviera itinerary, including Puerto Vallarta, Mazatlan, and Cabo San Lucas. Travel to agave fields and coffee bean farms in the Sierra Madre Mountains or have lunch at Mazatlan’s beautiful El Presidio Restaurant. Visit the city’s new Observatorio Museum with a funicular to a bar with stunning coastal views, where you might spot some brave cliff divers.

The Bliss also offers the choice of staying at The Haven. If money isn’t an issue, this area of â€‹â€‹the ship remains private with its own dining room, pool, lounge, and spa. Speaking of spa, the Mandara is a fully equipped thermal spa with sauna, salt room, snow room, and heated tile lounges designed by chiropractors for back relief. If any part of your luggage contained stress, this experience will make it all go away.

Overall, the Bliss offers a multigenerational opportunity to travel with the extended family. With several swimming pools, a laser tag and a karting circuit offered, this cruise option will appeal to all ages. Once the vaccine regulations for children are lifted, everyone who has been vaccinated will be welcome and families can once again navigate in style and safety.