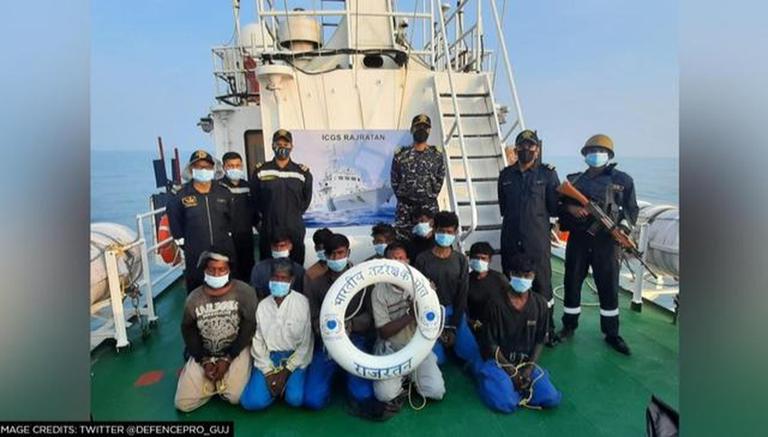 The ICG caught the boat on a surveillance mission. The team found a fishing net and more food was found in the boat. No FIR has yet been registered and should be deposited in Porbandar. A press release says that for further investigation into the matter, the boat was taken to Okha in the Devbhoomi Dwarka district of Gujarat. “On the night of September 14, Indian Coast Guard vessel ‘Rajratan’, while on a surveillance mission, apprehended a Pakistani boat named ‘Allah Pawawakal’ in Indian waters with 12 crew members.” , had informed the ICG.

The investigation of the boat and its crew is still ongoing. The boat is also tracked with their GPS to know where the boat is before it is entered by the ICG. The 12 crew members are in custody and local intelligence agencies are also coordinating the investigation. The incident alerted central agencies to the possibility of terrorist links, as the Federal Bureau of Investigation (FBI) had previously informed India that a small boat was used by terrorists in the 11/26 attack. in Mumbai.

In a major development, Republic Media Network gained access to details of a foiled Pakistani terror plot on Thursday. According to the details, terrorists caught by the Uttar Pradesh Anti-Terrorism Squad (ATS) had received special training in Pakistan. The terrorists, who are also linked to Dawood Ibrahim’s brother, Anees Ibrahim, were arrested by UP ATS after receiving information from central agencies and the Delhi Police Special Cell regarding multiple explosions planned by suspects terrorists and explosives stored at various locations.

According to the latest information on terrorist suspects, Osama aka Sami and Zeeshan Qamar have been trained in bridge blasting, railroad blasting and large assembly area blasting in Pakistan. In addition, it was also revealed that the terrorists traveled to Pakistan using a boat from Oman. They had traveled to Pakistan without obtaining any stamps to avoid proving that they had visited the country before. About 1.5kg of RDX was found with the terrorists, suggesting they were planning an explosion in a large assembly area. Terrorists continue to be interviewed by the Information Bureau for more information on the plan.