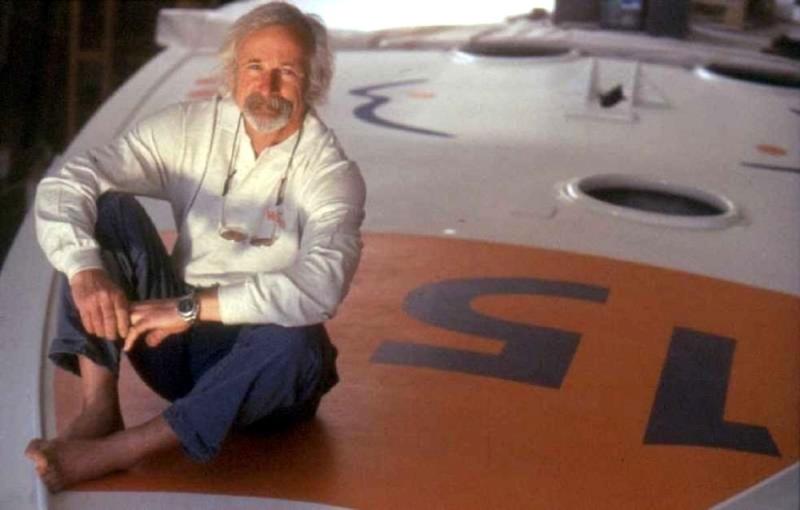 Pasquale De Gregorio is one of the closest sailors to all lovers of the sea and sailing. Pasquale is an example, he had to conquer the sea, he was not born near it, it was love at first sight, which lasted a lifetime.

Pasquale embodies a dream, that of running the most extreme single-handed race, the Everest of sailing, the VendÃ©e Globe. He teaches us that there is no expiry date, that you don’t have to be twenty years old to go around the world, he did it at almost sixty years old.

Pasquale De Gregorio did not embark on a crazy adventure, he studied, he sailed and in stages he reached his goal. Pasquale did not finish first. But the courage to finish the VendÃ©e Globe, disadvantaged by its blocked tilting keel and without weather, deserves great moral recognition. Pasquale did not have great resources for his project and he paid dearly for his dream but lived it fully, without regrets. He has never offered himself as a protagonist in the media spotlight, but we feel that he is part of our family, that of the sea and sailors.

This and much more is Pasquale De Gregorio, born in 1941, 180,000 nautical miles to his credit. A gentleman sailor, in love with the sea and always consistent with his choice of life, which led to losses but also a lot of enrichment. In a recently published interview, he told us his story, before leaving with his love for a cruise in southern Italy.

Pasquale De Gregorio: at the origin of the passion for the sea and sailing

â€œI was born in Abruzzo, on the slopes of the Majella, so I was more of a mountaineer and had a relationship with the sea as a normal citizen. I used to go on vacation to the beach in summer and I’m not even a very good swimmer, there was more desire to know at the start. I have a law degree and for almost twenty years I worked in the legal department of the Bank of Italy “, recalls Pasquale De Gregorio.

“In 1973, I was 32 years old, I was undecided whether to buy a van equipped to travel or to take a sailing course. I chose the second option and went to the famous Caprera school and for me it was an experience. Caprera worked the miracle, also thanks to a shift supervisor, Piero Bianchessi. He was an experienced sailor and he taught us to sail on dinghies, preparing us to sail on larger boats. Years later , we met again in Vanuatu, where he had moved.

In 1988, I gave up everything, my job and my career and I devoted myself entirely to sailing. I had already considered living at sea a year after having visited the Caprera nautical center. I had drawn up this plan: to hold out until the minimum seniority for retirement had expired in order to have a pension which would provide me with an economic base. I also knew that if I wanted to make that in life, by organizing school cruises with lovers of the sea, I had to learn how to sail well. I bought my first boat, a Brigand 750 and took my first cruise, the first time offshore. At that time, I saw clearly in the plan of my existence “, explains Pasquale De Gregorio.

Change of vision for a new lifestyle

“During the years that passed between the development of the project and its realization, I devoted a lot of time to learning. I was committed to creating the experience that would guarantee me an activity as a skipper and an instructor. and learn to always be in complete safety, for me and for others. The Adriatic was my gymnasium and my offshore school, at the start with Open regattas, like the 500 Ã— 2 or the Rimini – CorfÃ¹ – Rimini. This what fascinated me the most and still fascinates me in the sea, is the way of life, underlines Pasquale De Gregorio.

â€œThe first sailing course, this first experience in Sardinia had triggered a series of very deep chain reactions. In my passion for the sea, there is the tourist aspect of travel, the love relationship with the sea, people, places and anchorages. But the approach of a lifestyle completely opposite to the one I have followed out of habit and out of necessity.

My previous life was devoted to the affirmation of an economic condition of well-being from a bourgeois and common perspective. As I started to go by boat and made the first trips, I realized that there was a completely different life alternative. I understood that we could live well, with little, “says Pasquale De Gregorio.” It was a kind of detonator, I started to take off a series of certainties and beliefs.

Family and sea, a not always easy combination

â€œReconciling sea and family is not always easy, at the time of my change of life I was married and the father of two children. My first wife first appreciated the boat but had not undergone the same transformation, the same change of vision. Unfortunately this has led to gradual distancing and our lives have taken a divergent path, â€says Pasquale De Gregorio.

â€œMy two sons love to sail with me but always in a detached way, they haven’t fully embraced my same passion. However, they joined me around the world during the Rally Europa 92 World Tour in which I participated in 1991-92. They saw the Vava’u and we sailed to Thailand, sharing beautiful landscapes and emotions.

For fifteen years I have happily remarried with Oriana Ubaldi, painter and lover of the sea and sailing. When we first met he had already crossed the Atlantic. We met twenty-six years ago for common marine passions and a few years later the spark was sparked. Now we are sailing together “, admits Pasquale De Gregorio.