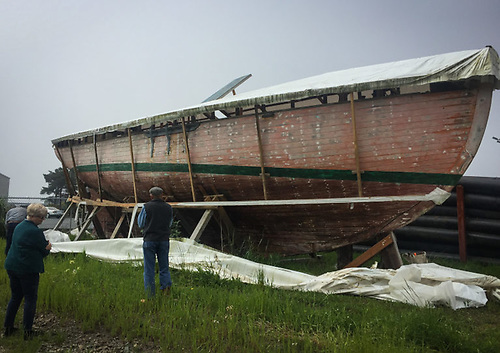 A historic gaff cutter that won the Fastnet Race in 1927 and was saved from scrapping in 2017 is being gradually restored to its former glory – but needs support to move the project forward.

The boat was designed by Albert Strange and a few years ago was rescued by the Albert Strange Association in the Pacific Northwest of the United States, but after a decade of trial and failure to find someone ‘one to undertake the project, Tally Ho was destined to be destroyed.

Leo Sampson Goolden, a boat builder and sailor from Bristol, stepped in at the 11th hour and bought the boat for £1 in May 2017 – even moving to rural Washington state to embark on the project.

“Although Tally Ho spent much of her life on the Hamble and the Solent, she was originally built in Shoreham,” Leo said of her motivations.

Acknowledging that Tally Ho – who currently resides in Port Townshend, northwest of Seattle – is a well-known and important historic vessel, Leo admitted it was overwhelming to see the amount of work that needed to be done.

But as previously reported on Afloat.ie, since chronicling the boat’s history and its restoration on the Sampson Boat Co channel on YouTube, it helps fund the parts and work needed.

And public support through donations, buying parts from the rebuilding “wish list” or becoming a patron of the project could help see it come to fruition and bring Leo’s dream of bringing back home closer to reality. the ship to the UK – and to compete in the Fastnet Race once again.