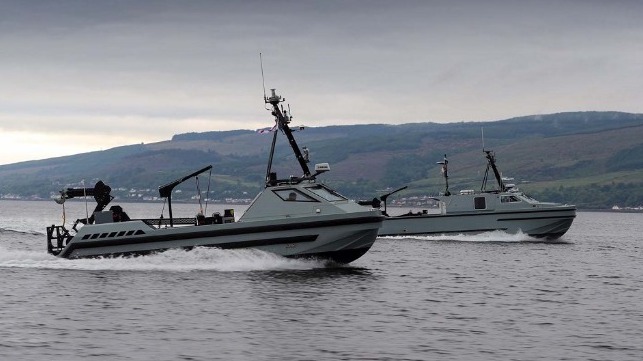 As a first step, the Royal Navy reassigns an experienced crew from its 1st mine countermeasures squadron, withdraws it from the rotation of its ship and puts it in charge of autonomous mine hunting boats. This may be the first time that a permanent crew of a conventional warship (or possibly any ship) has completely shifted to a stand-alone, unmanned operation; it also marks the beginning of the end for traditional mine countermeasures vessels in service with the Royal Navy.

Squadron 7 crew completed several tours of duty in the Middle East, either aboard the HMS minehunter Shoreham or one of them Sandowntwin class ships. These conventional mine-hunting vessels each spend three years in a row out of Bahrain; when they retire, they will be gradually replaced by autonomous boats from the British Project Wilton. The first three of these new boats – RNMB Hebe, Harrier and Risk – will be operated by Crew 7.

“After seven years of working with the community of Sandown, times are changing with the future of mine warfare now clearly on the horizon,” said Chamber Master Chris Proctor, Operations Room Supervisor for the crew 7. “While I don’t expect the transition to be free from startup issues, I’m excited to get to work with the new systems and be a part of the future of mine warfare. “

After saying goodbye to HMS Shoreham in Bahrain, the team returned home to Clyde Naval Base in Scotland to retrain on Project Wilton’s new class of boats. The ships are configured for manned, remotely controlled or autonomous capacity, and one of them – the HMS Hebe – is a bit larger to accommodate a mobile command and control cabin, which the team can use to manage the other two boats at sea. (All three boats can be controlled from shore, if required.)

By shifting to stand-alone minehunting operations, the goal of the Royal Navy is not only to reduce the cost of a full-size manned ship, but to get the crew out of the danger zone in a business. notoriously dangerous. Hebe, Harrier and Risk can detect and classify mines and UXOs while operating at high speed, without endangering sailors and heavy workers.