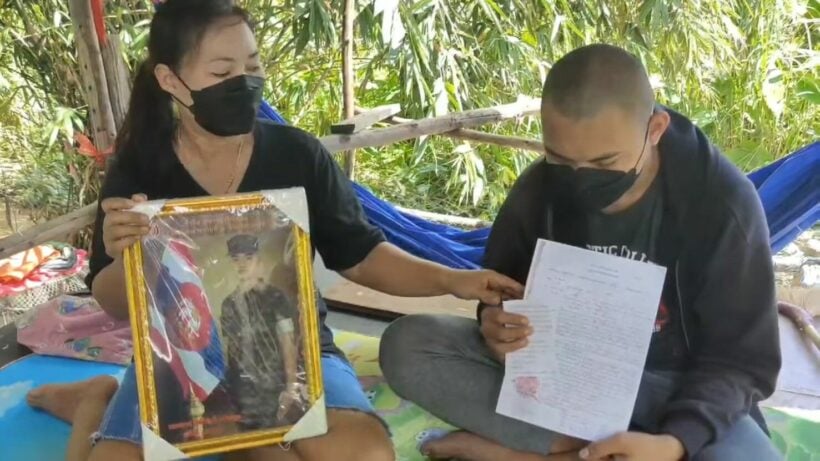 A Royal Thai Navy sailor has filed a formal complaint with police that his eldest son “abused him”. The sailor surmised that his eldest might be dissatisfied with his cooking skills and the way he cut vegetables.

He told police he was hit on the head and ordered to face a series of punishments. After discussions with the authorities, the sailor and his family decided to negotiate a settlement on this matter. However, a spokesperson for the Royal Thai Navy said the matter could not be settled and authorities would impose disciplinary action on the senior officer.

Runnanee Turaphan, the victim’s mother, brought her child to Pluta Luang Provincial Police Station to report the incident to Sattahip District Camp in Chon Buri. The sailor, Wuttipong Charoensook, told police he joined the navy for 7 months and shared cooking responsibilities for other sailors and officers.

He claimed the senior officer hit him in the head with a knife handle and slapped him repeatedly while he was cooking, for no reason. He said he dared not ask what the officer’s grievances were and assumed it was because of his cooking skills or the way he cut vegetables.

He also claimed that the same superior punished him, ordering him to lay his head on the ground and bow down, counting from 1 to 5oo. The elder allegedly did the same to him the next day until he surrendered to the abuse and asked to go home.

The Royal Thai Navy spokesman said the commander of the department, to which the senior officer reported, had been informed of the incident and further investigations would be carried out.

“Even though Wuttipong and his family would like to settle down after talking, the business still had to operate according to law.”

The authorities also insisted that the Royal Thai Navy would never encourage any punishment or harmful attack on the sailors in its charge.

“Anyone who breaks the rules must be punished with disciplinary measures.”

While the case is being investigated, Wuttipong is allowed a break while he receives counseling and recovers from the physical abuse. After that, he will be moved to work in other departments, instead of cooking.

This type of “hazing” or initiation and bastardization ceremonies is a common phenomenon in the Thai military ranks. There have been a number of high-profile cases, including the deaths of young recruits after beatings and harsh punishments. Senior Thai government officials have acknowledged the abuses and called for urgent changes in the culture of military officials towards young recruits and soldiers.