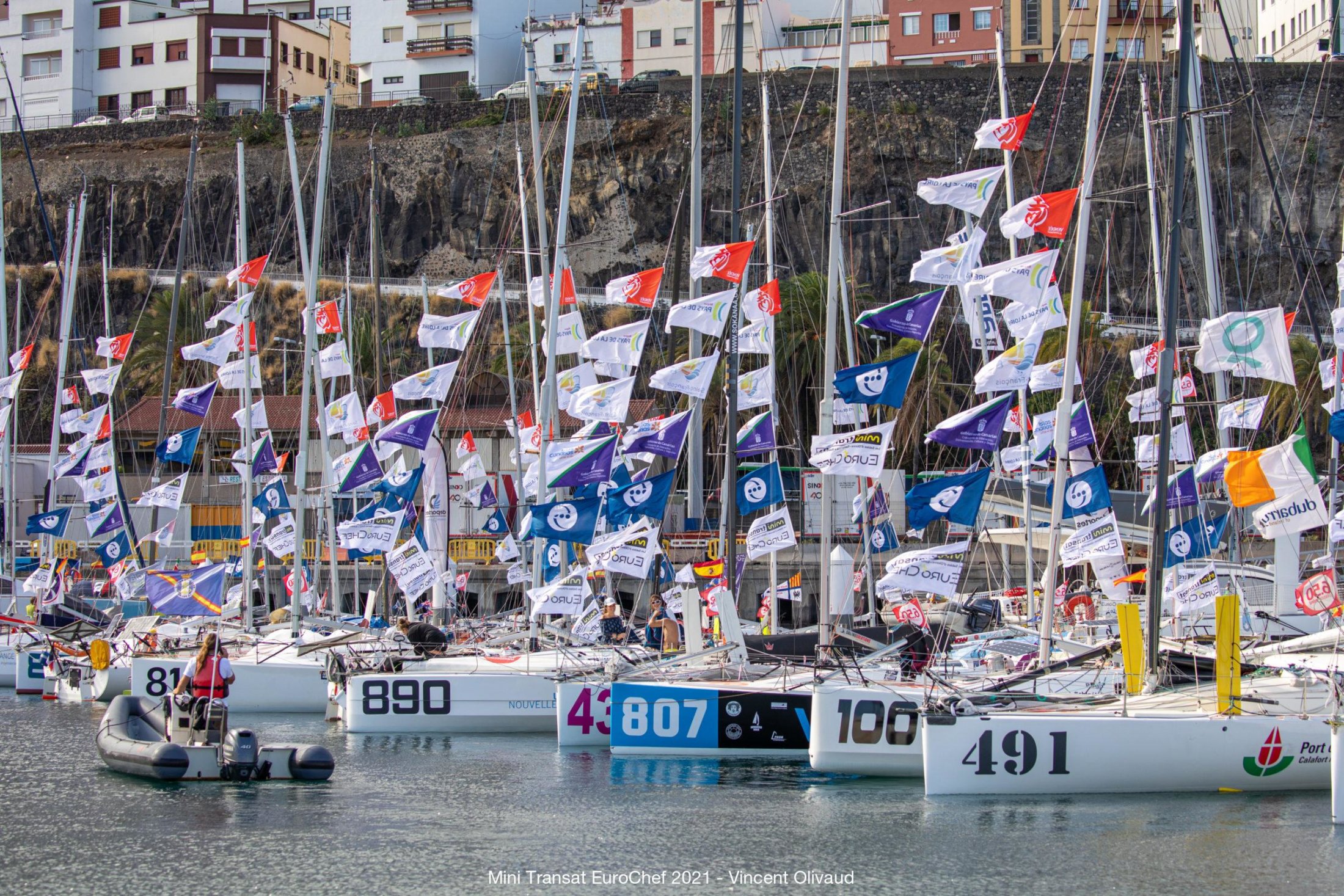 On Friday October 29 at 2:00 p.m. UTC, the 87 participants still competing in the 23rd edition of the Mini Transat EuroChef will take the start of the second stage of the event.

After having cast off from Santa Cruz de La Palma, they will set sail for Saint-FranÃ§ois, Guadeloupe, which is equivalent to a sea crossing of 2,700 miles. All the sailors are preparing to tackle the real transatlantic section of this event, the only instructions being to leave the island of El Hierro on starboard with the negotiation of a waypoint located at 25 Â° North and 30 Â° West and a special mark. at Terre de Bas.

As for the weather, things are going as planned with conditions forcing the competitors to descend very far to the south in search of a steady trade wind. This will force competitors to make important strategic choices in order to extricate themselves from the Canary Islands archipelago. The sailors may have a few weather surprises in store, but all are eager to leave and ready to take the plunge.

If the first stage between Les Sables d’Olonne and Santa Cruz de La Palma (1,350 miles) gave the skippers a taste of what to expect, the second stage between the Canaries stopover and Saint-FranÃ§ois (2 700 miles) will really serve as conditions synonymous with open sea. Indeed, once they have left the Spanish archipelago in their wake, the next shore they see will be the one bordering Guadeloupe, unless the conditions are push them to dive as far as Cape Verde.

In fact, not only is the Azores high tending to dip southward at the moment, but a large low is also expected to bypass Madeira’s latitude early next week, breaking the trade winds system. To try to remove more pressure, the Mini sailors will have no other choice but to descend very far in latitude if they want to see this famous NE wind recover from Wednesday 3 November.

â€œNot only is it going to be a bit longer than expected, but also, more importantly, a bit more strategic than one might have imagined. It certainly won’t be a straight line course with a few jibes here and there. Initially, the emphasis will be on getting out of the Canaries as quickly as possible and going down south to catch more wind, â€said Louis Mayaud (916 – Youkounkoun), who does not hide his apprehension at the eve of this second act.

â€œI am more anxious before this second stage than at the start of the first. I think it has to do with the fact that we are heading towards the open ocean, towards the unknown if you will. We have to put ourselves in the lead for around 20 days of racing, which is no small feat, â€said the Lille skipper.

Go to the unknown

â€œI can’t really imagine what we’re about to do. During the first stage, we stayed quite close to the coast, in areas that we know more or less, especially when, like me, you have already had the opportunity to participate in the Les Sables – Les AÃ§ores – Les Sands. Here we are setting off on something that is completely unknown. I have mixed feelings about this, â€said Julien Hatin (869 – Les Entreprises du Paysage – Normandie).

â€œI don’t really know how I feel. Inevitably there is a lot of stress, because I am naturally someone with a bit of nervousness before a race start. Having said that, I like to discover new things, especially the ones that energize me. I know that I will see so many new features and that I will have to get used to the open sea, â€admitted the sailor from Calvados, whose objective after a rather hectic first leg due to battery problems is correct. to have as much fun on the water as possible.

â€œIf I could experience times when time stands still, where you can make the most of the moment, that would be great. I will have succeeded in my adventure if that happens, â€Hatin.

Going to the other side and savoring the journey is an ambition shared by the majority of solo sailors in this 23rd Mini Transat EuroChef. Many are hoping to move up the rankings after an epic first leg.

A delicate opener in store

They all share a common goal: to get out of the Canaries as quickly as possible. Demand is likely to be difficult however due to the light airs in the region (a northeast breeze between 5 and 10 knots is expected) and, above all, some significant wind shadows, especially those created by the island of Tenerife and its famous Teide, which rises to 3,715 meters above sea level.

“The effects of the latter can extend over more than 60 miles, calling for serious strategic decisions to be made from the start,” said Christian Dumard, weather consultant for the event.

La Gomera skirt? Give a very large place to El Hierro? Even on paper, it is difficult to pin down the best trajectories. The solo sailors will have to make these decisions tomorrow before the field of possibilities opens even more. The only rules on the playing field from there are a waypoint in the middle of the Atlantic to prevent sailors from going too far north, due to the increased risk of tropical depressions, then a special mark at Terre de Bas for prevent them from going too far. near the particularly rocky part of the Pointe des ChÃ¢teaux.