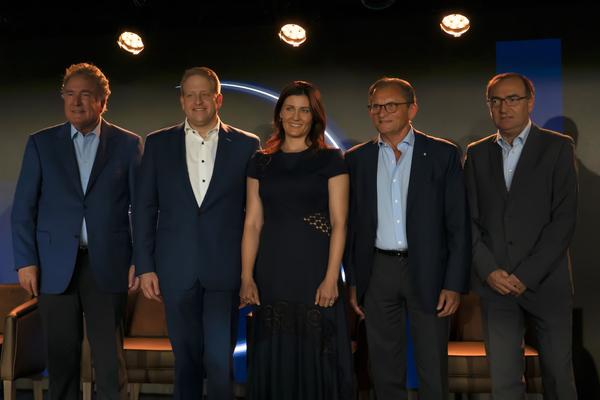 Silversea Cruises named its new ultra-luxury ship, the 596-passenger Silver Moon, at an evening ceremony in Piraeus, the port near Athens, Greece.

The godmother of the 40,700 gross tonne vessel is Gaia Gaja, from the famous Italian winery Gaja, whose wines were served at the following gala dinner.

Among those present at the ceremony was Richard D. Fain, Chairman and CEO of Royal Caribbean Group, the parent company of Silversea Cruises.

“This ceremony is the very first new name for a ship since, in our case, the start of the pandemic,” Fain told attendees. â€œBut it not only commemorates the peculiarities of this ship, but it serves as a great symbol of the fact that the cruise has returned for the traveling public.

â€œThe tradition of naming a new ship goes back thousands of years and symbolizes something very powerful,â€ Fain continued. â€œBut today, it takes on special significance because today it symbolizes not only the birth of a new ship but the rebirth of cruising as a tourist destination. The past 17 months have been stressful and frustrating in many ways for many of us, but today we can see that the world is opening up and cruising is leading the way and cruising from Greece is a wonderful place to start. . “

The Silver Moon was delivered on October 30 in Italy and finally kicked off its inaugural season from Athens from June 18, making a series of 10-day trips to the Greek Islands.

“This is an extraordinary step in the history of our cruise line,” said Martinoli. â€œToday we have christened Silver Moon as the ninth ship in our fleet, marking an evolution in luxury travel for the 21st century. As the first ultra-luxury cruise ship to set sail this year, Silver Moon is paving the way for the return of ultra-luxury cruising. It represents the strength and resilience of our industry. On board the newest addition to our fleet, our guests will rediscover the world in unparalleled comfort and whispered luxury. I express my gratitude to the Royal Caribbean Group, Fincantieri, Captain Georgiev and the ship’s crew, as well as our teams ashore, for making this momentous occasion possible.

Built at the Fincantieri in its shipyard in Ancona, Italy, the Silver Moon is an evolution of the sister ship Silver Muse. The ship has redesigned public spaces, butler service in all suite categories, and a crew-to-guest ratio of nearly 1: 1.

The launch of Silver Moon also marks the start of Silversea’s new culinary program, Sea and Land Taste or SALT. Three new sites on board form a hub of culinary discovery for guests. In SALT Kitchen, SALT Lab, and SALT Bar, guests are invited to delve deeper into the cuisine and culture of each region with regionally inspired dishes, drinks and demonstrations. SALT Shore Excursions allow travelers to experience the food and drink cultures of each destination.

The first of two ships in Silversea’s fleet to return to service, the Silver Moon is joined by the new 100-passenger Silver Origin vessel now sailing new routes in the Galapagos Islands.

Silver Muse will begin sailing in Alaska from Seattle on July 29. From July 30, Silver Shadow will operate tours of Iceland from Reykjavik.

More Silversea ships are expected to set sail in the near future, and Silversea’s third new ship since 2020, Silver Dawn, is scheduled to make its maiden voyage in November 2021.

Silver Moon is one of six Silversea ships – the others include Silver Muse, Silver Origin, Silver Shadow, Silver Whisper and Silver Explorer – to have recently achieved Infection Control Certification for the Marine Industry (CIP-M) from the classification society, DNV. These certifications underscore Silversea’s commitment to protecting the health and well-being of the guests, crew and the communities it visits as part of the company’s return to healthy service.