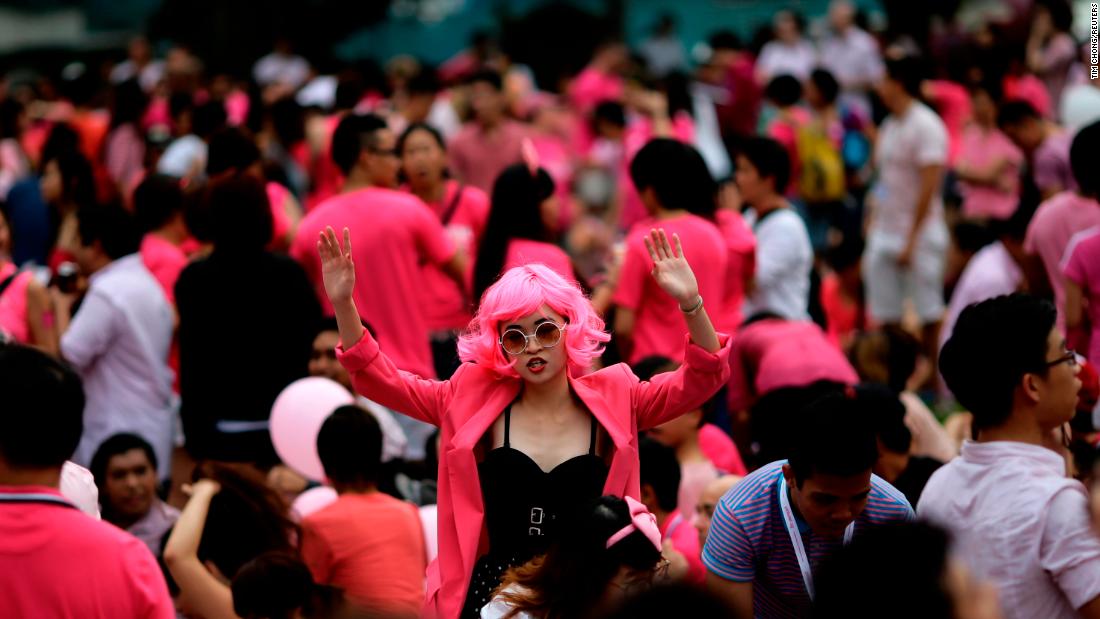 Lim, 21, was born male and now identifies as trans female. This year’s rally was her first, and she took part alone.

“The transition in the military is as you can imagine,” she said. “I can’t publicly embrace this side of myself and only have friends in the online community.”

“But today I decided to show up and I didn’t know what to expect. I brought a skirt and changed when I arrived at the park and was so warmly welcomed. I appreciate everyone being here.”

After two years of virtual gatherings due to the pandemic, Singapore’s biggest queer pride event returned to Hong Lim Park on Saturday, where it began on May 16, 2009.

Crowds of thousands showed up on the hot, humid afternoon, carrying pink signs and waving rainbow flags in support of the city-state’s gay rights movement.

Among the crowd were MPs Henry Kwek of the ruling People’s Action Party and Jamus Lim of the opposition Workers’ Party.

Gay sex in Singapore remains illegal even if it is consensual, between adults, and takes place in private. But societal attitudes, while still largely conservative, are changing, campaigners say, and the government is ‘now considering the best way forward’ on whether to change the law, which has been in place since Singapore was a British colony. over 60 years ago.

“Policies need to evolve to keep abreast of these changing views. And legislation needs to evolve to support updated policies,” Singapore’s Law and Home Affairs Minister K Shanmugam said during a briefing. a recent parliamentary session.

“And if and when we decide to move, we will do so in a way that continues to balance these different viewpoints and avoids causing a sudden and destabilizing shift in social norms and public expectations.”

Last week, the Disney Pixar film Lightyear was rated NC16 in Singapore, banning children under the age of 16 from watching the film in cinemas due to a controversial scene depicting a same-sex relationship.

Singapore’s Infocomm Media Development Authority said the animated film was inappropriate for young viewers due to “overt homosexual depictions”.

“We don’t have respect or equality no matter what our pledge and the government says – and that’s why it’s important to stage Pink Dot every year,” said Nizam Razak, a 36-year-old gay man. years at Pink Dot. “Why can’t our kids see a lesbian kiss? Already like that, we’re erased in society here in so many ways and that’s not right.”

“When are things really going to get better for us in the gay community? It’s hard to say.”

Organizers said turnout was higher than in previous years and they hoped to maintain the momentum next year.

“The planning was a bit rushed, but in the end we made it. We brought together thousands of people to support our cause for gay rights and pride in Singapore and that was the goal” , said a representative.

For new entrants like Dawn Lim, the Pink Dot experience “didn’t feel like Singapore.” “This park, this sea of ​​roses – it really was a safe space and I’m glad I got to experience what it is,” Lim said.
“For one day a year, I feel human and free to be myself without fear or judgment from people and when I leave Hong Lim Park tonight, I will return home and return to my hidden life.”