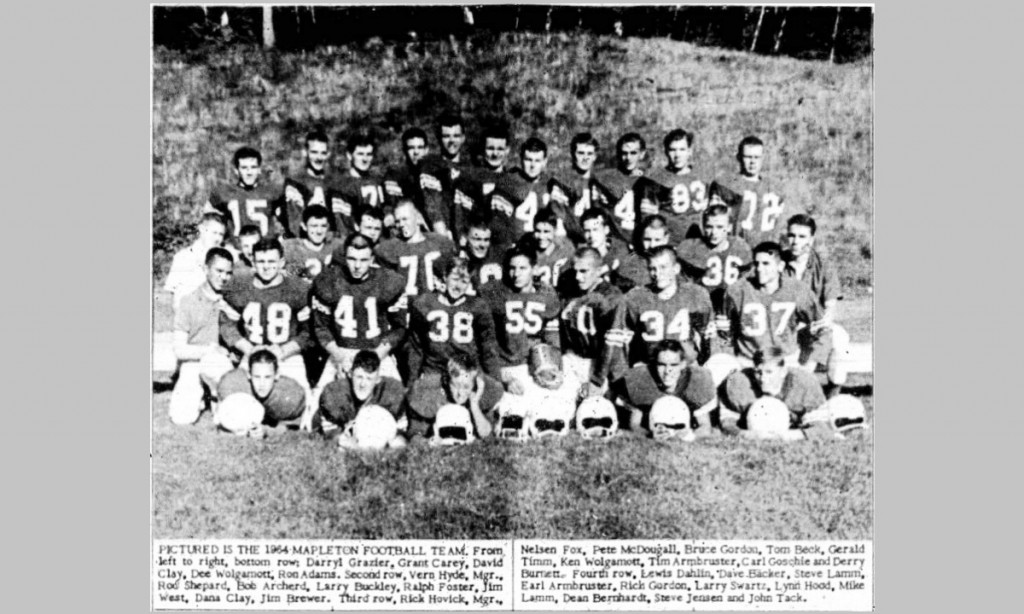 October 21, 2021 – Heading into the 1964 season, most Oregon high school football tipsters expected reigning co-champions Siuslaw and Newport to fight for first place in the Coastal Eight League again. teams. Newport were a consistently strong team and Siuslaw may have returned the best running back in the state, Tooey Emery.

In fact, no one can remember if or when Mapleton had ever won the Coastal League and his automatic place in the A-2 State playoffs. That spot would usually go to Siuslaw, Newport or Reedsport and a win over the Vikings was usually enough to qualify Sailor’s season as a success.

Longtime Mapleton resident Lynn Hood, a member of the 1964 Sailor football team guard, shared memories of her years at Mapleton High and playing football for the Sailors.

His memories of 1964 are vivid, especially when it comes to rivalry with his rivals downstream Siuslaw.

1964 was an exceptionally wet year. This added to the challenge for the Mapleton children who traveled from all over the Upper Siuslaw River area to school and practice.

Hood remembers long, rainy trips home after training. Often he had to hitchhike to the family ranch in Indian Creek. Fortunately, the Mapleton community always looked after each other and inevitably someone they knew would come and pick it up.

The terrain the Sailors trained and played on quickly became a muddy, muddy mess, and stayed that way all season, like most other high school grounds on the Oregon coast.

Hood recalls that Siuslaw got creative in dealing with the quagmire that was their Hans Peterson pitch.

â€œThe field was so bad in Florence that they poured sawdust on it,â€ Hood said. “Then when you played on it, it all ended up in your uniform and in places you can’t even imagine.”

Siuslaw’s game also brought out the mischievous side of both teams.

“Mapleton and Florence” have started. We had a fight, â€Hood said. â€œWe had a big ‘M’ on the hill behind the school. Someone from Siuslaw came over and painted it yellow. I probably shouldn’t say anything, but we returned the favor by painting our blue “M” on the water tower on Spruce Street, just outside Florence. “

Since 1962, the Sailors have had an additional chance every season to face their rival, as, besides the Coast League game later in the season, Mapleton and Siuslaw also faced off to kick off the non-league part of the season. For four years, from 1962 to 1965, the two rivals of Siuslaw River met alternately on each other’s pitch to open the season.

On Friday evening, September 11, 1964, the teams opened their season at Hans Peterson Field in Siuslaw. Most of the fans in attendance that night had hopes for a competitive game, but most also believed that a Viking victory was predestined.

These assumptions were quickly forgotten when Mapleton rolled out 61- and 40-yard drives, each ending in a rushed touchdown by Gerald Timm for the Sailors. Before they knew what hit them, the home team were down two scores.

Vikings running back Emery ran an 18-yard touchdown to drop Siuslaw to under seven in the second quarter to make it 14-7.

Mapleton quickly regained his double-digit lead when quarterback Lew Dahlin hit tight end Earl Armbruster 9 yards to make it 21-7 at halftime. In the third, Emery ran for a 79-yard run to the Mapleton 1 to set up a Viking touchdown in the next play, but it wasn’t enough as the Sailors held on for the 21-14 knockdown.

For the Sailors’ second game on September 18, South Shore Power Plant Brookings came to town for another non-championship game for the team. The Bruins overcame Dahlin’s connections to Armbruster by 20, 70 and 25 yards to beat Mapleton 31-21. The blues and whites entered the Coast League game 1-1.

Even with the loss, the Sailors felt ready for the Coast League game after facing two of the coast’s top teams to start the season.

If the State hadn’t noticed the growing momentum of the grill at Mapleton, they certainly did after the Sailors traveled to Reedsport on September 25 to take on the No.3-ranked A-2 team of the ‘State.

â€œReedsport Upset By Mapletonâ€ was the title displayed at the top of the sports page in The World, Coos Bay, the next morning after the two teams met.

â€œLife is full of surprises and Mapleton had one in store for Reedsport on Friday night. The Sailors all looked up and noticed as they ambushed the Braves 22-7 in the Coastal League opener for both teams, â€The World sports page gushed.

In a game where the two teams only racked up 195 yards on offense, it was Reedsport’s penalties and turnovers that made the difference. That, and Sailor Dahlin’s quarterback who threw two touchdowns and ran for another.

After the final buzzer, chaos ensued. Supporters from both teams came onto the pitch.

â€œWe (the team) had barely left the field when fans of both teams came out of the stands and started to fight,â€ Hood recalls.

In Game 4 on October 2, another out of league affair, Philomath came to town and Mapleton easily dealt with the Warriors 32-7. Three more touchdown passes from Dahlin to Armbruster made up most of the score.

The Sailors were now tied with Newport atop the Coast League with a rematch against rival Siuslaw afterwards.

The Vikings entered the contest on October 9 without a win this season. Unlike the last time these two teams met, they were big underdogs for the sailors.

In a rivalry game like SHS vs. MHS at the time, the record didn’t matter.

There was no doubt that both teams would be ready and excited for this game.

For Siuslaw, the motivation for a win was high as it looked like a potential win might be the only bright spot in an otherwise disappointing season for the Viks.

While the Vikings showed flashes of the talent that made them Coast League co-champions the year before, the second round also belonged to the Sailors. Dave Becker completed a 40-yard touchdown run with a 25-yard touchdown reception from Dahlin, which helped the Sailors overcome an 83-yard touchdown sprint by the reigning A-2 State champion in the 100 yards Les Conley. Rematch was not on the agenda for Siuslaw, who lost for the second time this season to Mapleton 19-14.

Then on October 16, Mapleton hosted the Boomers of Toledo and continued their dominance with a 32-20 victory. The game was not as close as the score indicated as Toledo scored his last two touchdowns in the dying moments of the fourth quarter.

Before the last Friday of the Coast League game, Mapleton was atop the Coast League with a 4-0 record. Although they had a tough clash with second-place Newport, most people thought the Sailors were the best team in the league.

The Associated Press’s A-2 Top 10 poll had Mapleton as the No.6 team statewide, followed by colleagues Coast Leaguers Reedsport at No.8 and Newport at No.10.

Since the Sailors held a lead over Newport and Reedsport, even a loss would keep them in contention for the place in the state.

Mapleton was in pain when they arrived in Newport on November 6 for the two teams’ final game of the regular season. The wear and tear of a long season of high school football was starting to catch up with the sailors.

â€œI think Earl (Armbruster) had water on his knee,â€ Hood said. â€œLew (Dahlin) had injured his back or his shoulder. We were pretty well beaten.

Not to mention, the Newport squad just had more players to work with, which pays off big at the end of a long season.

â€œIt seemed like every time I lined up there was a different Newport player looking at me from across the line,â€ Hood said.

So at the end of the regular season, the top of the Coast League standings were Mapleton 5-1, Newport 5-1 and Reedsport 5-1.

League rules state that in the event of a two-way tie, the team that has had the most time since their last trip to the state is chosen as the league’s representative. The league hadn’t expected a three-way tie, and the best solution they came up with was the proven method of pulling names out of a hat.

Draw they did it. Newport was selected. Mapleton’s season was over.

One of the greatest seasons in Mapleton history ended with nothing more than a stroke of bad luck.

Hood said the team was disappointed but “life went on”.

Hood graduated from MHS in 1964 and then served in the US Navy during the Vietnam War. He was part of the attack by US forces to eliminate the Ho Chi Minh trail. After returning from duty, Hood went to work in the woods as a lumberjack until he said it was getting “boring”. He changed careers and went into forestry for 30 years.