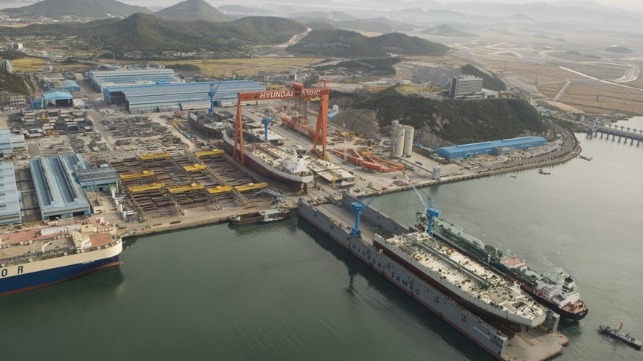 South Korea expects shipbuilding orders to decline from high levels recorded in 2021. A new report from the Export-Import Bank of Korea cites strong growth this year in orders for container ships and LPG carriers , anticipating that order levels will not be sustained. in the coming year. Forecasts predict a 15-23% drop in new order volume in 2022.

The report released by the bank’s Overseas Economic Research Institute examines the trends at play in the market. They cite a three- to four-fold increase in shipping rates as a key factor contributing to the sharp increase in shipbuilding orders in 2021 as well as continued demand from shippers to carry cargo. They also note that while the container ship and gas carrier construction market was strong, other segments of shipbuilding continued to lag. They believe the ongoing IMO environmental regulations will also weigh on the shipbuilding market.

Looking at the current global market, they predict that orders will exceed 41 million tonnes in 2021, which would be an 80% increase from 2020. After nine months, UK firm Clarkson Research announced that orders were more than three times higher. from 2020 to 37.5 million tonnes ordered between January and September 2021. The Korean report places the forecast at a total of $ 96.5 billion in orders for all of 2021.

The expected slowdown in orders is expected to lead to a 15% drop in order volumes to 35 million tonnes globally in 2022. The report estimates that the value of shipbuilding orders in 2022 will be down 10% to 86 billion tonnes. dollars.

Korea’s three largest shipbuilders all said they had exceeded their annual forecasts by the end of the first nine months of 2021, and many midsize shipyards also benefited from an increase in orders. Korea Shipbuilding & Offshore Engineering recorded the biggest gain, surpassing its annual target by more than a third, while Daewoo Shipbuilding & Marine Engineering and Samsung Heavy Industries said they exceeded their targets by more than 10%.

Competing with China for the bulk of the global order book, the report predicts South Korean shipbuilders will end 2021 with orders totaling 17 million tonnes. They estimate this year’s orders from South Korean yards at $ 42 billion.

Over the coming year, orders from shipbuilders in South Korea are expected to decline 23.5 percent to a total of 13 million tonnes. The report estimates the value of the order placed in 2022 at $ 34 billion, which would represent a decrease of 19%.

Strong container ship demand fueled much of the growth worldwide in 2021. Clarkson recently reported that container ship orders reached their highest level since 2007. They calculated that a total of 5.6 million TEUs are currently on order, the majority for larger vessels. to more than 12,000 TEUs of capacity.

The longer-term outlook for shipbuilding remains positive, however. Among the trends that should drive future orders, such as the need to comply with new environmental regulations and the desire to decarbonise. New technologies and in particular automation should also stimulate future orders.