Korean shipbuilders are increasing investment in green maritime technologies and digitalization in a bid to gain the upper hand against rivals in China and Japan. With tougher environmental regulations set to be in place from 2023, major shipbuilders – Hyundai Heavy Industries, Daewoo Shipbuilding & Marine Engineering and Samsung Heavy Industries – are betting demand for ammonia-powered ships will skyrocket. .

Companies are keen to invest in green technologies such as those related to ammonia-based fuels. Hyundai Heavy Industries (HHI) announced in May this year that it would spend 7 trillion won ($5.67 billion) on research and development of green technologies, including ammonia fuel technologies. . HHI plans to hire more than 5,000 new employees for its R&D sector for this purpose.

The green transformation we seek is a key goal for the future of our business,” said an HHI spokesperson. “We plan to focus all of our capabilities on nurturing key talent and developing relevant technologies.”

Korea leads the race for ammonia fuel in shipping in terms of obtaining approvals for the development of ammonia fuel and ammonia-powered ships. Hyundai Heavy Industries obtained the industry’s first Approval in Principle (AIP) for an ammonia fuel system from the Korea Register of Shipping in September 2021. Samsung Heavy Industries also received an AIP for a very Large Crude Oil Carrier (VLCC) ready for ammonia from DNV, a Norwegian ship classification agency, in August last year.

Japan and China are close behind, with Chinese companies obtaining AIPs later than Korean companies, and Japanese companies failing to obtain AIPs for green technologies, despite announcing their intention to develop powered vessels. to ammonia by 2028. 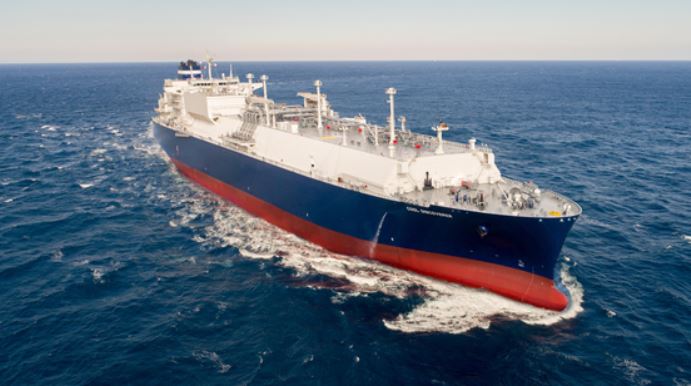 “Investment in green technologies such as ammonia fuel is crucial for the survival of shipbuilders,” said Yang Jong-seo, senior researcher at Korea Exim Bank’s Center for Global Economic Research. “It’s a matter of life and death. If shipbuilders don’t provide technologies to reduce carbon emissions, they will be left behind indefinitely.

Efforts to develop green technologies and fuels are already underway. KSOE focuses on the development of environment-friendly vessels, such as ammonia vessels and liquid hydrogen carriers. DSME was granted approval for 23000 TEU class ammonia powered super large container ships by Lloyd’s Register in Britain in October 2020.

There are a few setbacks to using ammonia, such as the fact that the ammonia production process emits carbon dioxide. Scientists are currently developing ways to produce ammonia without emitting carbon dioxide. Another problem is its relatively low volumetric energy density. “Ammonia requires a storage tank with a volume about 4 times that of conventional diesel fuel,” Park Chul-woong, a researcher at the Korea Institute of Machinery and Materials, said in a report. “Therefore, care must be taken not to unload from the engine or the storage tank.”
Ammonia isn’t the only technology Korean shipbuilders are focusing on in their efforts to make their ships more environmentally friendly. DSME is also developing carbon dioxide capture and storage technology. DSME successfully verified carbon dioxide capture and storage technology for vessels using ammonia in September last year.

Samsung Heavy Industries (SHI) is also accelerating the development of green technologies. SHI developed an intelligent, environmentally friendly production limitation system earlier this year and began marketing it immediately. This system monitors and measures the engine power of the main engine or engine shafts of ships, which reduces carbon emissions by more closely tracking the amount of emissions.

“The possibility of replacing existing ships is increasing as the operating environment of ships needs to be made more environmentally friendly due to the tightening of marine environment regulations,” said Kim Young-hun, professor of Naval Architecture, Ocean Engineering and Computer Science at Kyungnam University. . “The demand for eco-friendly ships is trending and will continue to rise.”

“Korea is leading ahead of Japan and China in terms of the shipbuilding industry’s rapid transition towards environmental friendliness,” said Jon Joon-soo, professor emeritus of business administration at the University of Sogang. “Korea will be able to lead for a considerable period if we succeed in applying these new ventures.”

Another crucial area for the future of shipbuilding is the digitalization and automation of ships and shipyards. Digitization and automation is an issue that will transform the shipping market with the reduction of carbon emissions and high-efficiency improvements being enforced through tightening environmental regulations by the International Maritime Organization (IMO). Digitization and the use of big data in ship operations can reduce carbon emissions by analyzing and adjusting the operation of various ship systems to make them more efficient.

While automation such as autonomous driving is already happening in the aviation and automotive industries, automation in the shipbuilding industry is slowly spreading. Starting with the installation of surveillance systems capable of monitoring ships remotely, the ultimate goal of digitization and automation is to develop an autonomous unmanned ship.

“If you look at the future of the shipbuilding industry, digitalization and automation are also linked to the development of robots and artificial intelligence, as they will play a central role in autonomous ships,” said Kim Hyun-soo, professor of naval architecture. and Marine Engineering at Inha Technical College.

Companies are racing to develop more digitized and automated ships and shipyards capable of producing such ships. HHI plans to invest more than 320 billion won ($248.7 million) in building digital shipyards and related production facilities by 2030. HHI is also working to accelerate digital transformation by building a future type shipyard. This future-like shipyard is a virtual shipyard that can provide visual information, such as construction status and greenhouse gas emissions by clicking a ship on a digital map and monitoring electrical equipment , including cranes and forklifts.

“The transformation into a digitized shipyard through the collection of big data and the development of automation creates a big picture for risk hedging,” said Um Kyung-a, an analyst at Shinyoung Securities. “Shipbuilding is a labour-intensive industry. If labor can be replaced by automation, it will reduce the risk of increased costs due to accidents, process setbacks due to labor disputes, and increased labor costs.

Kim explains that the shipbuilding industry must adapt to rapidly changing environments through the development of green technologies and digitalization.

“There is a need for Korean companies to build new businesses through ship digitalization, linked to integrated control systems and automation,” Kim said. “There are many challenges in the industry such as dealing with environmental friendliness, decarbonization and achieving carbon neutral shipyards, so there is a need to secure investment capabilities for this purpose.”
Source: Korea Joongang Daily