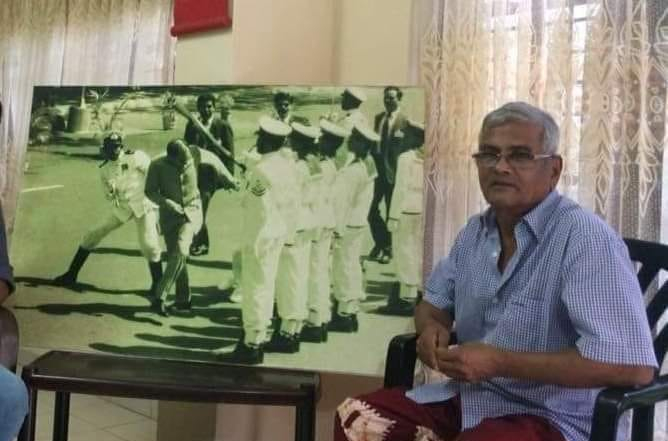 Sena Vidanagama, a 76-year-old Sri Lankan photojournalist, died on Wednesday. Vidanagama was best known for the iconic photograph of a former Sri Lankan naval officer attacking former Indian Prime Minister Rajiv Gandhi with the butt of his rifle during an honor guard ceremony in Sri Lanka on July 30, 1987 .

On July 30, 1987, Indian Prime Minister Rajiv Gandhi was attending a naval cadet assembly at the president’s house in Colombo when he was attacked with a rifle butt by a Sri Lankan Sinhalese navy soldier. . PM guards rescued him and captured the assailant quickly before the situation escalated.

The attacker, Wijemuni Vijitha, Rohana de Silva, was a Sri Lankan sailor who was present as Rajiv Gandhi observed the Sri Lankan honor guard. Rohana was furious at India’s alleged support for the Liberation Tigers of Tamil Eelam (LTTE). For this purpose, he slung his ceremonial rifle on the back of Indian Prime Minister Rajiv Gandhi’s shoulder. However, PM bent down and escaped the full force of the strike.

Rohana was tried in court and sentenced to six years in prison. He was released two and a half years after receiving a presidential pardon. Later, in an interview with the Daily Mirror, Wijemuni expressed his rage and explained why he attacked Rajiv Gandhi.

He said: “I was waiting at the honor guard, I was agitated and angry at what India and Prime Minister Gandhi had done to our country. But it was too late because the agreement had already been signed. This made me more angry and thought that I should do something to avenge the disaster caused to our country. I thought of how India was helping the LTTE with money, weapons and military training. The idea of ​​attacking with the rifle came to my mind when Rajiv Gandhi was about two or three feet away from me.

Prem Prakash, veteran journalist and chairman of ANI, also filmed the attack on Rajiv Gandhi. According to ANI’s Smita Prakash, who shared the incident on Twitter, Prem Prakash was the one who captured video of the incident while reporting from Sri Lanka. According to Smita, the PMO was supposed to disavow the event, but it had already made headlines in Sri Lanka.

Not one to take bullying from a PMO, @pp1931 sitting in the aisle refusing to budge until his tape was returned, Rajiv Gandhi invited him into the PM booth. The prime minister was rubbing his bruised elbow. He turned to his media adviser, said ‘how can we deny the attack, it’s on tape, give it back to him’

The video clip was also taken by Indian authorities in Sri Lanka at that time. However, it was eventually returned to Prem Prakash when the Prime Minister said so.