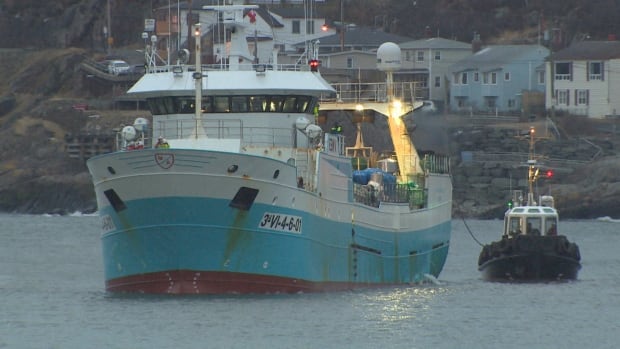 A ship carrying three survivors and the bodies of seven crew from a Spanish fishing boat that sank off Newfoundland arrived in St. John’s on Saturday.

The Playa Menduina Dos sailed into St. John’s Harbor on Saturday morning, where the bodies of the deceased were loaded from the ship by a crane and into waiting hearses. Canadian customs officers were seen aboard the vessel.

Early Tuesday morning, the fishing boat Villa de Pitanxo sank in rough seas off Newfoundland. Among the surviving crew members are the ship’s captain, 53, and his 42-year-old nephew, according to Spanish newspaper La Voz de Galicia.

The three survivors were found on a life raft in the water. The bodies of nine crew members were found after the sinking of the ship.

Of the 24 crew members, 12 were still missing when the search was called off on Thursday.

Waller said the surviving crew members suffered from hypothermia, but did not need medical attention.

The cause of Tuesday’s accident has not been determined. The RCMP said the investigation was outside of its jurisdiction.

The Transportation Safety Board of Canada told CBC News that Spain was responsible for investigating the tragedy.

Of the 24 crew members, 16 were from Spain, five from Peru and three from Ghana.