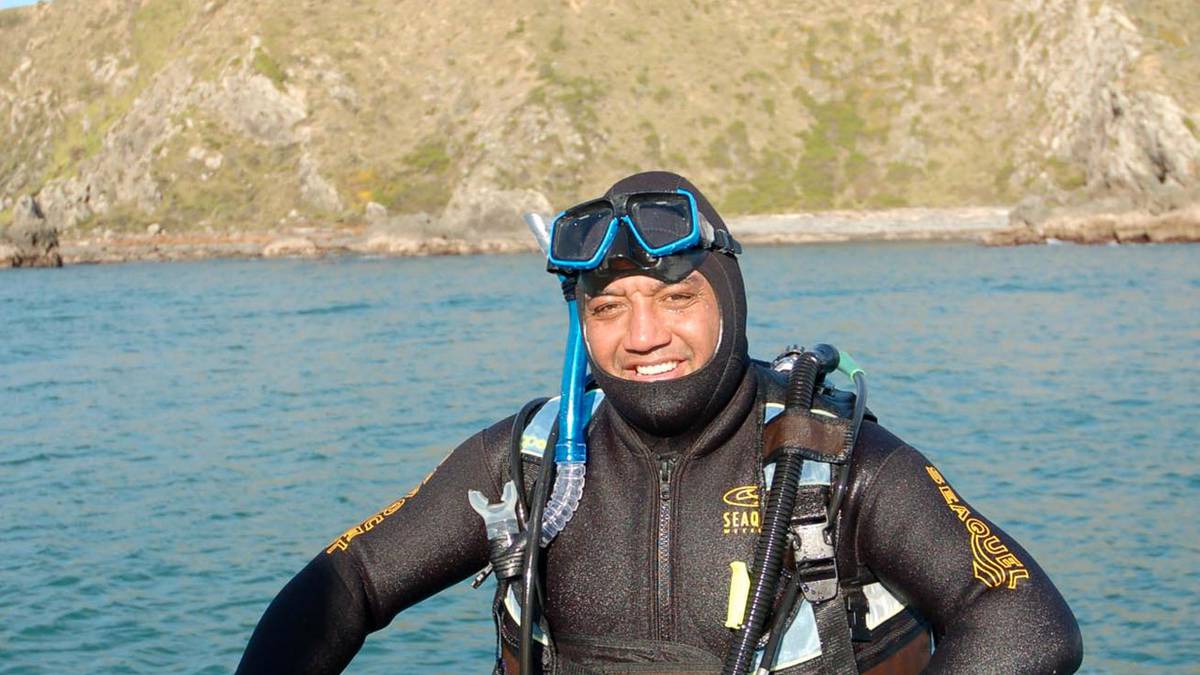 Former Navy diver Rob Hewitt was diving with friends off the coast of Kapiti in 2006 when he got caught in a tear. Photo / Supplied

A man who spent 75 hours lost at sea recalled the fear and the darkness while waiting for help.

Rob Hewitt’s story is one of many miraculous tales of Kiwis battling the New Zealand wilderness and surviving.

Another survival story was added this week after Tom Phillips and his children walked through the front door of a house in Marokopa unharmed.

They had been missing for 17 days – relatives feared they drowned after being swept away by a scoundrel wave.

Police said Phillips and the children were in dense bush about 9 miles south of Kiritehere Beach on rough terrain.

This raised questions about how the family managed to survive. Relatives had already started to mourn their loved ones who they believed had probably been swept away by a wave.

Speaking today to Nick Mills of Newstalk ZB, Rob Hewitt described his own lost experience at sea in February 2006 as one of panic, fear, hope and belief.

Former All Black’s brother Norm Hewitt had taken a diving trip with friends off the coast of Kāpiti.

He got caught in a tear, surfaced 600m behind their boat, and was quickly pushed back further by the tide.

Hewitt spent the next four days and three nights drifting along the coast to Mount Taranaki, struggling to survive.

He said being a ship diver in the Navy he was used to the ocean and didn’t panic right away. But as the sun began to set the first night, panic set in.

“I disappeared around three o’clock, four o’clock in the afternoon and around nine o’clock at night… okay, I’m having problems here, so what do you do.

“What do you do when your back is against the wall like that. I guess it was about facing my biggest fear, and my biggest fear was dying. What was it? to die, and what it smells like, what it looks like. These are the things that I had to get through first. “

At first, Hewitt remained calm, remembering that he was happy in the water. Then he started to pray.

“Karakia, connect to my tipuna, talk to my whānau members who have passed away in this next space and just try to connect. Connect my soul and my wairua and myself to something that gives me hope. “

“All night long, I hadn’t eaten all day, I’m hypothermic, I’m dehydrated and sleep comes and goes as it pleases. And then how I wake up is water comes on my face. and the next minute I have a lot of water in my mouth and I start to choke and drown. So that kind of brought me back to reality. “

Hewitt said he went through processes in his head to try to get through the ordeal.

“It was all about process and just getting through the day.”

A strong southerly wind developed on Hewitt’s second day at sea, and he knew this would make rescue by boat nearly impossible. So he turned his attention to the sky.

“I saw the AirNZ plane go from Wellington to Auckland or from Christchurch to Auckland. For some reason I used my mask to try and signal to the plane.

“Sixty pairs of eyes can maybe look at the water and see some kind of light. It just gives me hope. One hour this plane will be in Auckland, one hour these guys will be home, one hour they’ll be home. will look at the news and then they will think, oh damn I saw something. “

Hewitt said he had some dark times, but he had to believe and hope people were looking for him.

“I had to believe I had some friends and Whānau members – and people I didn’t even know – looking.

“But like I believe, I don’t believe either, I think nobody cares. It’s about my wairua going up, down, hitting bottom – thinking it’s bottom and bottom. next minute, it is not.

“Because the next time I go down into this depression space, it gets even darker, and every time I go down, it’s harder for me to get out.”

Hewitt said he gave up twice, on day two and again on day four, just minutes before he was found.

He said he had never been charged for the rescue effort, and it was only after he was found that he realized the enormous effort that had gone into his search.

“I felt stinky because I thought no one cared. The next minute my brother is on TV, my navy mates are on TV, saying we’ll find him, bring him back dead or alive. “

Views of the valley: Me? In a fight? Let’s learn from the breed in history, let’s not get angry | New