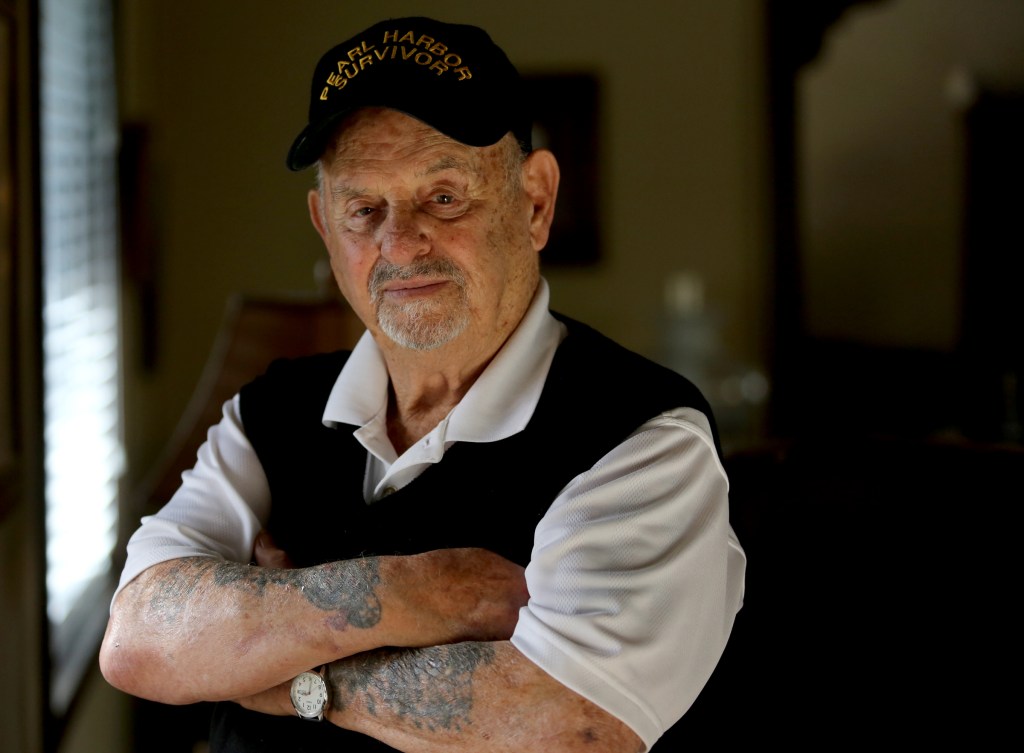 Larry Petretti was an avid outdoorsman, a sniper with a bow or a gun, and not too long ago he was said to be the oldest operating real estate broker in California.

The Tamalpais High School graduate who grew up in Marin County and was a longtime resident of Santa Rosa was also part of the corps of local WWII veterans who witnessed and responded and kept memories of the horror on Pearl Harbor nearly 80 years ago, The Last Man Standing.

Petretti, president and sole combat veteran of the Pearl Harbor Survivors Fraternal Organization in North Bay, died Nov. 13 after a brief deterioration in his health. He was 98 years old.

With his passing, there is no longer a Pearl Harbor vet known to live in Sonoma, Lake or Mendocino counties. No one knows for sure how many Pearl Harbor survivors remain in the country; estimates range from a few dozen to perhaps 100. A small contingent of centenarians is expected to be in Oahu on December 7 for the 80th anniversary celebrations of the surprise attack by Imperial Japan that killed more than 2,400 Americans, inflicted severe damage to the Pacific Fleet and dragged the United States sharply into World War II.

Petretti, a native of San Francisco, was still 17 years old when he enlisted in the Navy in early 1941. He was a seaman aboard the docked destroyer USS Whitney, and his country was not at war when the first of the 353 Japanese aircraft carriers launched bombers and fighter jets appeared over Pearl Harbor on the Sunday morning of December 7, 1941.

Like so many American sailors, soldiers and marines there, Petretti was a teenager who enlisted in the late 1930s or early 1940s to see the world and earn a salary while serving his country.

“We didn’t have the first idea what war was like,” Petretti said shortly before the Pearl Harbor celebration in Santa Rosa in 2012. In an instant, that changed. Soon Petretti was helping to remove the bodies of his fellow sailors from the oily water of the harbor.

He said in a pre-dec. 7 interview nine years ago Americans shouldn’t let time erode their gratitude for “the young guys who gave their lives were burned alive.”

“I hope they will never be forgotten,” he said, “even when the last of the Pearl Harbor survivors are dead, which will not be long.”

The 55-year-old veteran’s wife, Kathlene Petretti, said he was remarkably active and healthy throughout his long life, but appeared to be aging markedly in just the past few months. Just a few weeks ago, he was hoping to participate, as he had done for several years, in the Veterans Day parade in Petaluma.

Petretti’s parade driver, car enthusiast Jim Sennes of Sevastopol, had planned to drive him on November 11 in a particularly fitting car: the vintage 1941 Lincoln Zephyr. Sennes worked on the dazzling 80 year old to make sure it was fit to roll on Veterans Day.

“I was determined to bring this car into the parade with him,” Sennes said. “It would have been spectacular. “

But it was not to be. On Veterans Day, Petretti was not at all ready for the rigors of a parade.

“He wanted so badly to be there,” said Kathie Morgan of Windsor, for decades an honorary member of the now defunct Santa Rosa-based section of the Pearl Harbor Survivors Association. “He was just too sick at the time. “

He was born to Italian immigrants in San Francisco on August 23, 1923. His wife said he spoke only Italian in his youth, and after his first day of public school announced to parents Giuseppi and Maria Petretti that ‘he wouldn’t go back to teachers and classmates “because they talk so funny”.

The Petretti family moved in time to Marin, where Larry graduated from Tam High in 1940. He quickly enlisted in the Navy. “He is on the adventure,” said one of his three children, Shawn Petretti of Santa Rosa.

Before and after the world-changing attack on Oahu, Larry Petretti would serve on a variety of ships. He became a sniper and received special forces training as part of a program that predated the creation of the elite Navy SEALS.

When the war ended, he returned to the Bay Area and held several jobs, including bartending and becoming a staff member of the Marin Municipal Waters District. Over time, he embarked on a long career as a real estate agent and then a broker.

He and Kathlene got married in Reno in 1966. They moved a bit before settling in Santa Rosa 40 years ago.

In his spare time, Larry Petretti relished hunting and fishing, archery and shooting. His son Shawn has said he was at one point the state archery champion.

Even at age 90, Petretti continued to work as a real estate broker.

At one point, he joined Luther Burbank Chapter # 23 of the National Association of Pearl Harbor Survivors. It was a social and service organization for veterans who attended one of the most shocking and transformative days in American history.

On December 6, 1941, the country was deeply divided over going to war, despite the widespread subjugation and atrocities committed by Nazi Germany in Europe and by the Empire of Japan throughout Asia. East. On December 8, the United States was at war and on its way to becoming a global superpower.

The Pearl Harbor Survivors Association was founded in 1958. Members wore white pants, Hawaiian shirts, and blue and white cloth caps. Locally, they held an annual December 7 celebration and visited schools to explain why the 1941 attack happened and why it was important, as their group’s slogan proclaimed, to “Remember Pearl Harbor.” – Keep America Alert ”.

Although he joined and generally attended the Pearl Harbor Day ceremony, Petretti was not active for a number of years in the Santa Rosa-based chapter and did not attend the monthly meetings. “For some reason he wasn’t interested,” said Kathlene Petretti.

The chapter was at risk of closing its doors in 2014, following the death on Veterans Day of the president and only remaining active veteran, Herb Louden. The Petaluman had served as the local, state and national chaplain of the Pearl Harbor Survivors Association, and at 97 he was the revered dean of war veterans in the region.

To fill the void left by Louden’s passing, Petretti began attending the Survivors’ group’s monthly luncheons and agreed to be chairman. Others present were a few widows of Pearl veterans and a few sympathizers.

The Sonoma County group dissipated just before the local onset of the COVID-19 pandemic in 2020. Attendees at a small December 7 celebration at the Santa Rosa Veterans Memorial Building in 2019 warmly applauded Petretti as the last. Known survivor of Pearl Harbor County.

In addition to his wife and son in Santa Rosa, he is survived by his daughter Dawn Petretti of Santa Rosa, his son Larry Petretti Jr. of Diamond Springs in El Dorado County, five grandchildren and four great -grandchildren.

At his request, there will be no services.