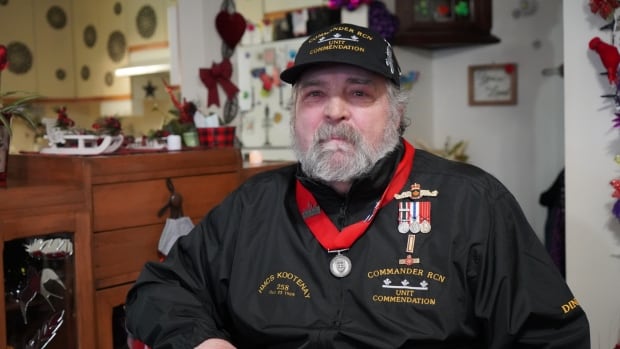 When Allan Bell showed up for his monthly breakfast with former HMCS Kootenay shipmates in Dartmouth, Nova Scotia in December, he quickly learned that a number of them were upset. from a local newspaper article. It was about a sailor who had been compensated for injuries he allegedly suffered in a fire on a Canadian warship more than 50 years ago.

The veterans were worried because they don’t believe the fire happened.

The Department of National Defense also says there is no trace of the fire.

“There are too many things wrong,” said Bell, who goes by the name Dinger and is a survivor of the 1969 HMCS Kootenay explosion that killed nine people.

In a decision dated August 31, 2021, the Veterans Review and Appeal Board – an independent appeal tribunal for disability programs administered by Veterans Affairs Canada – awarded the sailor an undisclosed sum of money for the pain and suffering he experienced as a result of traumatic stress disorder.

The panel acknowledged awarding the compensation despite the fact that there was no evidence of the fire.

WATCH | An explosion and fire on HMCS Kootenay in 1969 killed nine people:

The panel also noted that the veteran testified in a “candid and credible manner.”

In a statement, a spokesperson for the review board – which includes former police officers, lawyers and veterans, among others – said the board is required by law to accept any uncontradicted evidence presented. by the claimant whom it considers credible.

“As board members assess the evidence, they will look at it in the best possible light and resolve any doubts so that it benefits the veteran,” Amber Nicholson said.

Veterans Affairs refused a request in 2012

Veterans Affairs Canada previously denied the request. In November 2012, he ruled that although the sailor suffered from PTSD, there was no objective evidence to support that it was related to his time in the Canadian Armed Forces.

The sailor, who was 73 at the time of the decision, was in the regular force for four years, from September 1966 to August 1970, and was electrocuted in a civilian accident in 1995. This accident led to his diagnosis of PTSD , but the sailor and his psychologist now claim that the PTSD was also partially caused by the alleged fire on the warship.

In his claim, the sailor wrote that “circa 1968” an aviation gas fire raged in a storage tank on his ship as he returned from stops in Florida and Bermuda.

He testified that when he arrived at his emergency station, he found flames coming out of a hatch that led to the avgas storage. He said he had no choice but to batten the hatch, unknowingly locking in crew members, in order to fight the fire, and that “two or three” of them are dead.

The sailor said he was told at the time that he had done the right thing and the deaths were not his fault.

“I have and still feel terrible guilt about this,” he wrote.

Sailor, ship and casualties all unnamed

The sailor is not named in the review board’s decision, nor is the ship or any of the people believed to have died in the fire. Veterans Affairs declined to answer questions about those details, citing confidentiality concerns.

The review board says it does not have the names of the alleged victims.

In its decision, the committee wrote that the fact that the veteran was unable to obtain proof of the fire is “not proof that the fire did not occur.”

Allan Bell, 73, says he doesn’t believe the veteran’s story and has reported the matter to the RCMP, alleging fraud.

A Nova Scotia RCMP spokesperson confirms that a complaint was received on January 4 that a person had fraudulently received a prize by fabricating information. The RCMP referred the matter to Veterans Affairs Canada.

Veterans Affairs says it has investigated and no further action will be taken at this time.

The decisions of the Review Committee are final and binding.

In a statement, the Department of National Defense media relations officer said there was no record of a major fire on a warship in 1968 as described by the Veterans Tribunal. (review and appeal).

“In addition to internal resources, the team of Royal Canadian Navy historians consulted external naval historians and former RCN personnel familiar with this period, and none of them had any recollection or knowledge of such an event”, declared Daniel Le Bouthillier.

The largest fire aboard a Canadian warship of this period occurred on HMCS Kootenay while returning to Canada in the English Channel on October 23, 1969. A catastrophic gearbox failure resulted in the he explosion that killed nine people and injured 53. the vessel was towed to Halifax and arrived on 27 November.

“I lost nine of my shipmates,” Bell said, her voice still cracking with emotion all these years later. “I burned 50% of my body, third degree burns. I spent over a year in the hospital.”

There was another incident on December 3, 1969 on HMCS Bonaventure. This one involved aviation gas, as the veteran granted the described recent settlement of his experience – but the ship was off the Atlantic coast at the time, having just left Halifax, not returning from Florida or of Bermuda. Two sailors died from the deadly fumes and two others lost their lives during the rescue attempt.

A fire on HMCS Nipigon on October 18, 1965 also involved aviation gas and killed three people. This happened a year before the sailor who received the settlement joined the navy.

David Yeo, 75, who retired from the navy in 2001 with the rank of Lieutenant Commander, was then aboard HMCS Nipigon.

He said the ship was in the Gulf of Biscayne, off France, when a ball of smoke and another big bang came out of the mess hall, or living quarters. He said that’s where his shipmates died.

“He actually lifted me off the bridge and threw me against the wall,” he said in a recent phone interview from his Charlottetown home.

Yeo said what is described in the decision raises questions for him.

“It definitely doesn’t fit Nipigon,” he said. “In 39 years in the Navy, I have never seen an accident or incident that has not been investigated by a Board of Inquiry or a full investigation.”

Three of the four naval historians contacted by CBC News, who do not currently work for the Department of National Defense and have no independent knowledge of the review board’s decision, supported the view that any accident causing significant damage, especially where there is loss of life — is thoroughly investigated and documented.

Author and naval historian Roger Litwiller, based in Trenton, Ont., said in an email that clearing the claim should be seen as a positive step in acknowledging PTSD as a condition.

Michael Hennessy, a professor at the Royal Military College of Canada in Kingston, Ont., has also helped the Canadian Armed Forces deal with PTSD in the past.

He says the logbook should also contain a record of the fire, but he acknowledges that the events would have happened a long time ago.

“He’s obviously someone who’s been through traumatic events,” he said. “It’s hard to guess them.”

The veteran’s diagnosis of PTSD was confirmed by a psychologist in 2012 and was “always understood” to be related to the electrical fire he suffered as a civilian in 1995. His medical records show that there were no mental health issues in 1970, when he was medically released from the Canadian Armed Forces due to “noise-induced deafness”.

But in a submission to the review board, the psychologist wrote that the situation is complex due to the veteran’s significant memory loss, and “it is highly likely that the event aboard the ship was part of of a cumulative experience that rendered the entire 1995 experience as traumatic and debilitating over time as it was.”

Bell says he’s angry and wants the board to reopen the case.

He says that while he wants deserving veterans to be compensated, he also wants the truth to be known and that anything less is a disgrace to all who served honorably.