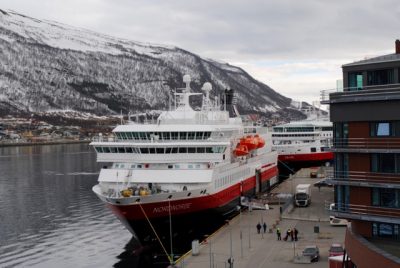 Police ordered the evacuation Wednesday evening of more than 300 people who were on board one of the Hurtigruten ships that sail along the Norwegian coast. The evacuation came after a threat was made against the ship while it was docked in the northwestern coastal town of Ålesund.

The threat came in the form of a phone call earlier in the evening which set off full alarm bells. Police declined to reveal the nature of the threat, but said it was ‘intended to instill fear’. About 260 passengers and 70 crew members were evacuated from the ship, the MS NordNorgeand taken to a nearby hotel.

The ship was searched and police later determined the threat was false. “We no longer have any reason to worry about the ship or the well-being of those on board,” Borge Amdam, chief of operations for the Møre og Romsdal police district, told Norwegian Broadcasting (NRK). “We had an intense investigation which allows us to say that this was not a real threat.”

Siri Løndal, also from the local police, said the identity of the person making the threat had been confirmed. She did not say if the suspect was a local resident. When asked if the police intended to press charges, she replied: “Absolutely!”

After being taken to a local hotel and served a meal, all passengers and crew were allowed to return to the ship, where the captain “stands at the bridge and welcomes everyone aboard,” the spokesperson said. from Hurtigruten, Martin Henriksen, former MP and leader of the Labor Party. The party youth group who lost many friends in the terrorist attack at the group’s summer camp on the island of Utøya 11 years ago.

“So far, we haven’t had any negative feedback” from passengers, Henriksen said. He said the evacuation order was given for ‘prevention is better than cure’ after the threat was called to the ship itself.

“It was of course unfortunate,” Henriksen told NRK, “but the police dealt with it quickly and efficiently.” The northbound ship planned to leave as soon as possible, but due to the delay it would have to abandon stops in Molde and Kristiansund and sail directly to Trondheim to return on schedule.

Police have reported no complaints from passengers and “there is no cause for concern,” Amdam told NRK.