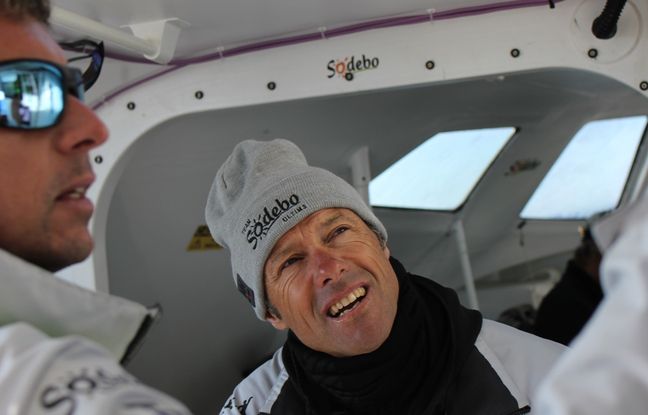 Above the handle of the hangar in the port of Lorient which houses its crew and sometimes its boat, it is written in lowercase: â€œWinning the Transat Jacques-Vabreâ€. These few words pasted by a member of Thomas Coville’s team sum up the ambitions of the Breton sailor in this transatlantic race, which will start this Sunday from Le Havre. With his teammate Thomas Rouxel, the skipper of Sodebo Ultim 3 hopes to be the first to reach Fort-de-France, in a race that promises to be ultra tough with 79 boats at the start, including five in the final. Winner in 2017, the year in which he was crowned â€œsailor of the yearâ€, the 53-year-old skipper presents an atypical course. First, because he was born in Rennes, an hour from the nearest port. But above all because nothing predestined his small size to become such a great athlete.

â€œI was born on May 10, 1968. It was a mess in Rennes, there were people throwing cobblestones while others were building barricades. My parents were still students. I arrived a bit quickly in their life â€. At the helm of an imposing 32-meter-long multihull, Thomas Coville impresses as much as he disconcerts. By his seriousness, his eyes narrowed towards the horizon, and his scathing humor. But also by his philosophy of life, his outlook on society. â€œSailing has become a high-tech mechanical sport. But the human remains essential. When you’re in doubles, the most important person on the boat isn’t you, it’s the other. I would like it to be the same on earth. On board, you cannot yell at yourself, sulk or get off. You have to find solutions. All the time, all the time â€.

Under his feet, a monster weighing more than 15 tons takes him at nearly 40 knots (about 75 km / h). Launched in 2019, Sodebo Ultim 3 is made to win. His skipper knows it, since it was he and his armada of technicians who imagined it. For this former engineer, the search for improvement is perpetual and has sometimes taken him to the extreme. â€œI stopped cutting the labels on my t-shirts to save weight. It was becoming a neurosis â€. The navigator shamelessly admits that he went so far as to cut the handle of his toothbrush, to gain a few grams in his quest for victory. This taste for perfectionism was undoubtedly born in adolescence, when Thomas Coville suffered from his very small size. â€œI was a boy who was very embarrassed by his physique. I grew up very late, they made fun of me, they looked at me. In adolescence, I was lost. My luck is to have had this encounter with this universe, â€he expresses modestly.

This universe is of course sailing. After his childhood in Rennes, Thomas Coville moved to Saint-Brieuc where he took up table tennis, but not for long. His first sea voyage? “With an uncle on his caravel”. But it is an animator of the airy center who will give him a taste for sailing.

He put me on a boat when I didn’t know. I like this feeling of starting from scratch. Sailing was love at first sight. Because as soon as I got out on the water, I was no longer judged, I was no longer laughed at. I fell in love with the elements. First with the wind. Then with the water. As soon as I left on a boat, on a windsurfing board, I had this emotion. This feeling that got me out of this adolescent torpor who is not at ease with himself â€.

The small build he was grew up and took revenge on all his college and high school mates. Since his debut on the Route du Rhum twenty years ago, the Breton skipper has risen through the ranks to become one of the most fashionable sailors of this brilliant generation. On Sunday, he will line up in doubles alongside Thomas Rouxel, another Breton used to sailing on the ultimates. â€œThey are exceptional sailboats. Today, every sailor dreams of sailing, of flying a little on these boats â€. The one who is approaching his forties started sailing very young, with his brother. “When I started, you never imagined that boats would fly one day.”

Last year, the two shared the failed Jules-Verne Trophy record attempt. But they wanted to team up for this transatlantic race that they dream of winning. “Thomas [Rouxel] is very strong, very competent, he could have chosen to go on another boat or with another project. I unsettled him a bit during the Jules Verne attempt. I asked him to get involved more than he usually did â€, recognizes Coville.

In a few hours, Thomas’ duo will be at the start to face the best in ocean racing. Aboard their ultimate, Franck Cammas, Armel Le Cleac’h, FranÃ§ois Gabart and Yves Le Blevec will try to snatch the trophy pocketed in 2017 by the little one from May 1968. But he will not let it be.