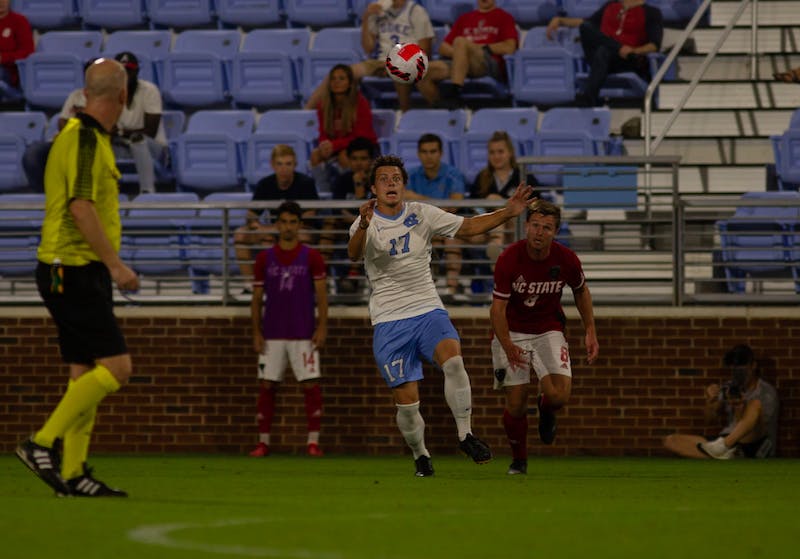 The energy at Dorrance Field was palpable in the North Carolina men’s soccer team 4-0 loss to NC State on Sunday night.

A sea of â€‹â€‹inflatable thunder sticks – handed out to fans before the game – roared throughout the game. The crowd erupted in cheers for every Tar Heel shot and save, and mocked the Wolfpack players in their neighborhood.

At one point, a life-size alien doll dressed in UNC gear was thrown into the student section.

And the fun didn’t end until a fan rushed onto the pitch at halftime, hoisting the alien above his head.

“In Europe we call him the 12th man – I think that has really helped us tonight,” said defenseman Filippo Zattarin. â€œYou know, whenever there’s something going on on the pitch, hearing the crowd helping you and cheering you on really gives you that extra energy. “

It was exactly the atmosphere the former No.4 preseason team needed after a disappointing five-game streak with just two wins that left the team unranked. After losing a game to UNC-Wilmington last Wednesday, head coach Carlos Somoano knew his team needed to approach Sunday’s showdown with more balance.

“We weren’t competing like we should have been, and by that I mean we weren’t responding very well to setbacks,” said Somoano. â€œWe talked about not letting one mistake lead to another mistake, which leads to a goal, which leads to loss. I think they got the message loud and clear.

â€œWe did a really good job covering each other up and walking at the right time,â€ Zattarin said. “So really, I think not only the defensive line but all 11 on the pitch did a good job of squeezing them and making sure they didn’t play.”

Zattarin also played a crucial role on the offensive side of the ball, assisting junior Cameron Fisher’s goal with a long down pass to open the scoring in the 31st minute.

It was again Fisher who drove the nail into the coffin with a scoring goal to give his team a 3-0 lead in the 84th minute. Transfer of graduates Gerit Wintermeyer gave Fisher a perfectly placed header, resulting in a goal between the legs.

“It was a free kick in our half of the field, and I just told Gerit to challenge (his defender), chain and run behind him,” said Fisher. “And he did, he had a good head, a lot of room behind him, and I just cut and saw a guy come and just hesitate and put him between his legs.”

Five minutes later, Wintermeyer put the ball in the net for the fourth and final Tar Heels goal of the evening. The forward transfer from Bradley University pointed skyward and ran towards the tumultuous student section, stopping as he pumped his arms in celebration.

“I’ve been here since 2002. There are just a few ‘Caroline football nights’, and that was one of them,” Somoano said. â€œI was thinking following the entrance, chatting with the guys. I don’t think I’ve felt that since 2018. It’s a great feeling to have fans behind us and to make us feel like Carolina football back on Dorrance Field.

To receive the news and headlines of the day in your inbox every morning, subscribe to our email newsletters.