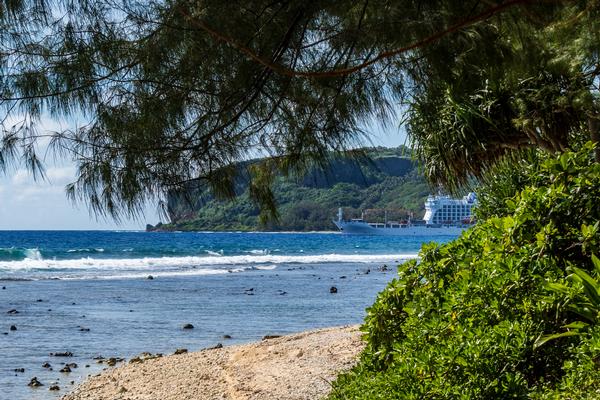 It almost looked like a scene from the musical film South Pacific. Our landing craft – a vintage WWII front loader – landed on the sandy beach with a slight thud, and we walked through the crowd of musicians and women with armfuls of flower leis .

“Welcome to Raivavae,” one said as I bent down to accept one of the fragrant lei, made with gardenia tiare flowers, basil shoots and local flora.

Each of the Australs has its own particular look. Raivavae is known as the “Bora Bora of the Australs”, similar to what Bora Bora was decades ago. We take a trip to the pool motu, an islet on the lagoon with a pool-shaped depression, explore a marae (temple) and visit an extraordinary smiling tiki (most of them have menacing expressions).

Like Bora Bora, Raivavae is characterized by a volcanic peak with a glowing aquamarine lagoon, but the difference here is an almost total lack of visitors. The passengers and crew of Aranui 5 are virtually the only non-islanders in Raivavae during our visit.

The entire archipelago is indeed particularly unfrequented by tourists. There are no resorts or hotels, only bed and breakfasts. There are airports (except on one particularly remote island) but there is just enough traffic for a flight to Tahiti a few days a week from most islands.

It’s an extraordinary trip for the Aranui 5, Aranui Cruises’ only ship, which normally has only one destination: the Marquesas in French Polynesia, a trip in the opposite cardinal direction of Tahiti in relation to the Australs. The ship normally makes combined cargo/cruise voyages to the Marquesas, a formula Aranui has perfected over the past four decades.

But change is coming to the local family shipping company owned by the Wong family of Tahiti. Dedicated passengers wishing to repeat their voyages with Aranui have been asking for alternative routes for years, and Aranui has responded with a significant investment: a boutique-sized, passenger-only vessel will join the fleet in 2026 to offer alternative itineraries. exploration to groups of islands such as the Australs. Until then, Aranui 5 flies these routes without freight (the company’s freight authorities are only good for the Marquesas).

It is a comfortable boat. My Premium Suite has a comfortable bed with Polynesian decoration, a sitting area, a spacious bathroom equipped with Aranui brand toiletries made with local monoi oil and a balcony with a pair of chairs. Additional amenities include a fridge, tons of storage space (most sailings last just under two weeks), TV with mainly French channels and a nice fruit display. Complimentary laundry service (excluding socks and underwear) is available twice while sailing, and there is a coin-operated laundry for these.

Most passengers take most of their meals in the dining room. Breakfasts are buffet style, lunches and dinners are served in three courses. There are no entree choices, but dietary restrictions are adhered to with advance notice. Meals also include a bottle of wine to share at the table.

The number of passengers is mainly divided between American and French travellers. Aranui’s staff — all local Polynesians — are fluent in English and French (many also speak a local language like Tahitian or Marquesan), and tour groups are often split between English-speaking and French-speaking passengers. The third most common passenger group is German, and there are also some German-speaking employees (non-French speaking passengers join the English speaking group).

If the Marquesas are used to the routine of frequent calls from Aranui 5, it is rather an opportunity in the Australs. On each island we are greeted by throngs of locals, dancing and individual lei for each of the 200 passengers and crew who come ashore, which is moving when you consider the amount of work that goes into the lei for as many visitors.

In Rurutu, we are welcomed by a ceremony at the town hall, then visit a coffee plantation and the Ana a’eo cave. The local guide tells us that pre-European contact Polynesians once used the cave for ritual cannibalism, before smiling and adding, “but don’t worry, we’ve already made lunch.” A scream arose from inside the cave and we ventured through the foliage to find another troupe of dancers and musicians playing with the cave’s stalagmites as an impressive backdrop.

On the even smaller Rimatara, we climb a hill to spot Rimatara’s ‘Ura, a colorful lorikeet only found on the island (apart from a population that was reintroduced to an island in the Cook Islands as a safety valve ecological). The bird is a mascot of the island, appearing on the local school buses in which we do our rounds, and we are lucky enough to spot several of them, straining to see their red, green and blue plumage.

In Rapa, COVID-19 concerns limited activities at the wharf (without an airport, medical emergencies requiring evacuation are a massive undertaking, so precautions were necessary), but that didn’t stop the lively dancing, the taro demonstration, the sumptuous midday buffet and evening dance show taking place in the warehouse on the quay.

Tubuai, which is also the administrative center of the Australs, greeted Aranui with a lavish fruit buffet and more glazed coconuts in a covered gathering area near the town hall. There were also a number of craft stalls (Tubuai is renowned for the skill of its wood carvers) that passengers could peruse before setting off on an island excursion to see the site of Fort George, the temporary outpost of the Bounty mutineers.

Aranui 5 is like its own self-contained capsule on all island tours (in addition to the Australs, it has also called at Raiatea in the Society Islands and Anaa in the Tuamotu). Because the Australs have little tourist infrastructure, Aranui 5 brings the benefit of tourist money without requiring major onshore facilities. Some of the logistics were a learning experience for everyone, but as itineraries move from expedition trips to annual or semi-annual events, layovers should flow more smoothly.

That’s not to say the trip wasn’t otherwise well planned. Onboard routines included nightly happy hours in the verandah bar with a view of the wake at the stern of the ship. Many passengers entertained themselves with books from the ship’s lending library or ukulele or dance lessons that culminated in an onboard show with passenger performers. One evening the staff held a fashion show with items for sale in the well-stocked boutique; other nights there was live music or karaoke.

Returning to Tahiti, it was almost like waking up from a pleasant dream – a rhapsody of warm Pacific islands with even warmer hospitality marked by heartfelt musical welcomes and genuine tender farewells.