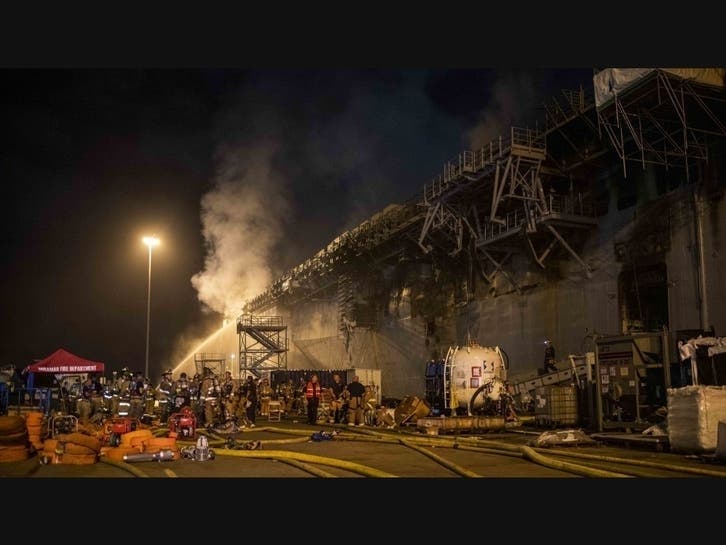 SAN DIEGO, CA – A Navy spokesperson confirmed on Wednesday that a sailor named in newly unsealed search warrants in connection with last year’s fire that ravaged the USS Bonhomme Richard has been charged last week for starting the fire.

Seaman Ryan Sawyer Mays, 20, was charged last Thursday with starting the July 12, 2020 fire, which burned for several days while the ship was docked at Naval Base San Diego.

Cmdr. Sean Robertson, spokesman for the US Third Fleet, confirmed Mays was the indicted sailor, but declined to discuss the investigation further.

A Navy statement released last week did not identify Mays, but unsealed search warrants this week in federal court indicate NCIS investigators last year sought to seize online communications, the phone. Mays laptop, vehicle and other items for possible evidence linking it to the arson attack.

According to court documents, investigators swept the ship about a week after the fire and determined that the fire originated in an area called “Lower V”.

Search warrants say a sailor said he saw someone who he was “fairly certain” Mays had entered Lower V just before smoke was reported in the area. Mays was questioned about the fire and maintained his innocence, while denying being in Lower V that day and saying “he was being trapped”.

A fellow sailor also told investigators Mays “hated” the Navy and a review of his Navy background showed he had previously sought to become a Navy SEAL before dropping out of the SEAL training program, affidavit says .

Further details in the affidavit indicate that firefighting equipment may have been sabotaged.

Firefighting stations in the lower and upper areas of the V were found to “not be in their normal configuration”, while firefighting hoses connected to the stations were found cut or disconnected.

A Navy official told ATF investigators he believed the stations were “willfully tampered with and / or disconnected.”

To request that your name be removed from an arrest report, submit these required elements To [email protected]